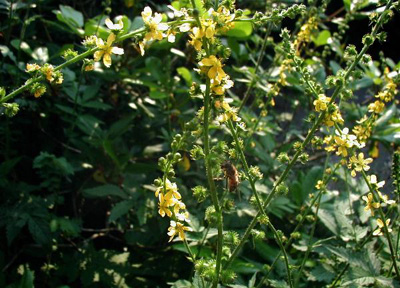 Flower Remedies: According to the Bach Centre (founded by Dr. Edward Bach), Agrimony is a remedy for those who wear a mask to hide what might be stress and inner turmoil. [1] Flower remedies are believed to act on an energetic level--the vibration of the plant is thought to transfer into a water sample, and that water sample is taken as medicine. Flower remedies are not the same as tinctures or essential oils; they do not contain properties or components of the actual (physical) Agrimony plant.

Agrimony is thought to be effective in soothing mucous membranes. It is used in cases of sore throat, gastro-intestinal complications, and nasal congestion. Agrimony is also considered to be effective in treating sores, burns, cuts, blemishes, rashes and varicose veins and thus is applied topically in ointments and washes. [2] In Europe, many shops carry products that contain Agrimony. [2]

In a study by Gray and Flatt (1998) where agrimony (Agrimonia) was incorporated into the diet (62.5 g/kg) and drinking water (2.5 g/L) of streptozotocin (STZ)-induced diabetic mice models, the presence of antihyperglycemic activities of agrimony was demonstrated. In the study, in vitro glucose uptake and metabolism were investigated as well. It should be noted that in this study, the effect of extract was glucose independent. [3]

Back in 1990, Swanston-Flatt et al. investigated the effects of eleven medicinal plants traditionally used as treatments for diabetes mellitus, including agrimony, with respect to glucose homeostasis of both normal and streptozotocin diabetic mice. Plant materials were administered in the diet, and food and liquid uptake, plasma glucose, insulin concentration, and body weight gain were monitored for weeks. Results showed that treatment with agrimony as well as other plants such as alfalfa, coriander, eucalyptus, and juniper “reduced the level of hyperglycemia during the development of streptozotocin diabetes,” as evidenced by reduced incidences of excessive thirst (polydipsia). [4]

In a recent study by Cehn et al. (2010), which aimed to isolate and identify various chemical compounds suspected to have blood sugar–lowering effects from agrimony, it was determined that agrimony contains nine compounds with blood sugar-lowering activities from the active section. [5] These are as follows:

In this study, repeated silica gel, polyamide, and HPLC chromatography were chiefly utilized to separate these chemical constituents, the structures of which were analyzed with respect to their spectral data and chemical properties. [5] The presence of these compounds indicates that agrimony has not only antihyperglycemic properties but also other constituents that may be of value to medicine because of their, for example, cardio- and neuroprotective, antioxidant, anti-inflammatory, antimicrobial, and anticancer activities.

Agrimony owes much of its medicinal utility to its tannin content. [11] Tannins are polyphenolic compounds responsible for the antidiarrheal property of agrimony. [12] Recent findings also suggest that tannins have anticarcinogenic and antimutagenic potentials, which may be the results of their antioxidative properties. [13] Agrimony tannins are sometimes used rectally for diverse rectal disorders. [12] Since according to recent studies, the tannins in agrimony deters the growth of certain types of bacteria, agrimony can be part of one’s topical means to manage burns. The antibacterial properties of tannins in agrimony also contribute to agrimony’s use as a gargle for sore throat and as a mild antiseptic and astringent. [14] To date, no clinical study has been published detailing agrimony’s effective and safe dose, especially information about its effect on pregnancy and lactation.

However, photodermatitis in patients was reported as an adverse reaction upon the usage of agrimony. [14] Agrimony was also promoted by the lay press for vaginal dryness and dyspareunia (i.e., painful sexual intercourse), but no scientific evidence currently supports this claim as proven. [15]

Elizabeth Blackwell's "A Curious Herbal" (1751): 1. This is the Eupatorium of Dioscorides, Galen and the ancient Greeks; it grows about two foot high, having several winged hairy leaves of a pale green colour; and yellow flowers. 2. It grows in Hedges, and the borders of fields; and flowers in June and July. 3. Agrimony is esteemed cleansing and purifying for the Blood, strengthening ye liver; and good in all diseases arising from the weakness thereof, as the Dropsy, Jaundice etc. Matthiolus recommends it with white wine as an excellent cure for the strangury and bloody water. Riverius extols ye powder of ye dried leaves for the incontinence of urine. It is likewise a vulnerary plant, and put in wound-drinks; and outwardly used in baths and fomentations.

William Thomas Fernie - "Herbal Simples" (1895): AGRIMONY -The Agrimony is a Simple well known to all country folk, and abundant throughout England in the fields and woods, as a popular domestic medicine. It belongs to the rose order of plants, and blossoms from June to September with small yellow flowers, which sit close along slender spikes a foot high, smelling like apricots, and called by the rustics "Church Steeples." Botanically it bears the names Agrimonia Eupatoria, of which the first is derived from the Greek, and means "shining," because the herb is thought to cure cataract of the eye; and the second bears reference to the liver, as indicating the use of this plant for curing diseases of that organ.

Chemists have determined that the Agrimony possesses a particular volatile oil, and yields nearly five per cent, of tannin, so that its use in the cottage for gargles, and as an astringent application to indolent wounds, is well justified.

The herb does not seem really to own any qualities for acting medicinally on the liver. More probably the yellow colour of its flowers, which, with the root, furnish a dye of a bright nankeen hue, has given it a reputation in bilious disorders, according to the doctrine of signatures, because the bile is also yellow. Nevertheless, Gerard says: "A decoction of the leaves is good for them that have naughty livers." By pouring a pint of boiling water on a handful of the plant‚ 'stems, flowers and leaves‚' an excellent gargle may be made for a relaxed throat; and a teacupful of the same infusion may be taken cold three or four times in the day for simple looseness of the bowels; also for passive losses of blood.

In France Agrimony tea is drank as a beverage at table. This herb formed an ingredient of the genuine arquebusade water, as prepared against wounds inflicted by an arquebus, or hand-gun, and first mentioned by Philip de Comines in his account of the battle of Morat, 1476. In France the eau de arquebusade is still applied for sprains and bruises, being carefully made from many aromatic herbs.

Agrimony was at one time included in the London Materia Medica as a vulnerary herb. It bears the title of Cockleburr, or Sticklewort, because its seed vessels cling by the hooked ends of their stiff hairs to any person or animal coming into contact with the plant.

A strong decoction of the root and leaves, sweetened with honey, has been taken successfully to cure scrofulous sores, being administered two or three times a day in doses of a wineglassful persistently for several months. Perhaps the special volatile oil of the plant, in common with that contained in other herbs similarly aromatic, is curatively antiseptic. Pliny called it a herb "of princely authoritie."

The Hemp Agrimony, or St John's Herb, belongs to the composite order of plants, and grows on the margins of brooks, having hemp-like leaves, which are bitter of taste and pungent of smell, as if it were an umbelliferous herb. Because of these hempen leaves it was formerly called "Holy Rope," being thus named after the rope with which Jesus was bound. They contain a volatile oil, which acts on the kidneys; likewise some tannin, and a bitter chemical principle, which will cut short the chill of intermittent fever, or perhaps prevent it. Provers of the plant have found it produce a "bilious fever," with severe headache, redness of the face, nausea, soreness over the liver, constipation, and high-coloured urine.

Acting on which experience, a tincture, prepared (H.) from the whole plant, may be confidently given in frequent small well-diluted doses with water for influenza, or for a similar feverish chill, with breakbone pains, prostration, hot dry skin, and some bilious vomiting. Likewise a tea made with boiling water poured on the dried leaves will give prompt relief if taken hot at the onset of a bilious catarrh, or of influenza.

This plant is named Eupatorium because it bears reference to the liver. In Holland it is used for jaundice, with swollen feet; and in America it belongs to the tribe of bone-sets. The Hemp Agrimony grows with us in moist, shady places, with a tall reddish stem, and with terminal crowded heads of dull lilac flowers. Its distinctive title is Cannabinum, or "Hempen."

Other names for Agrimony, Past or Present 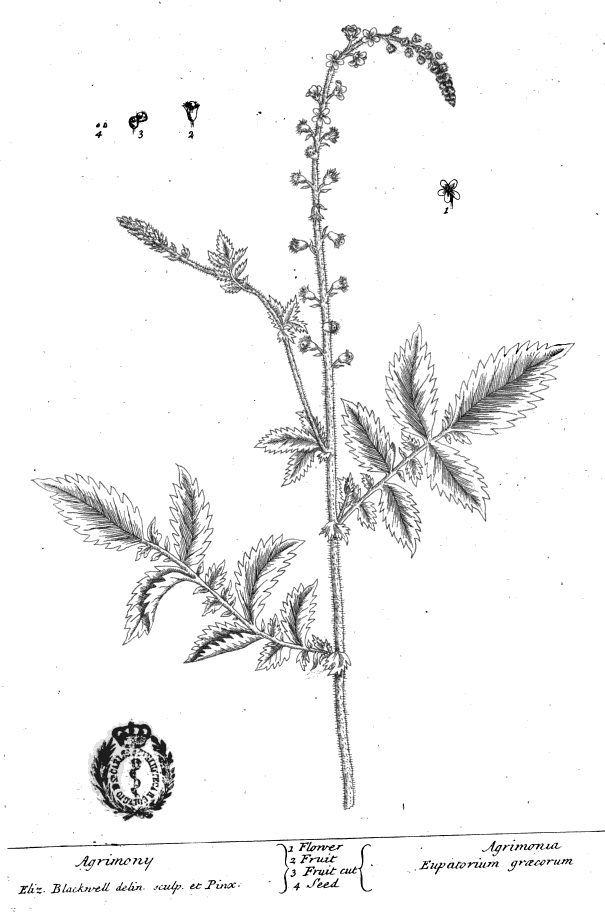