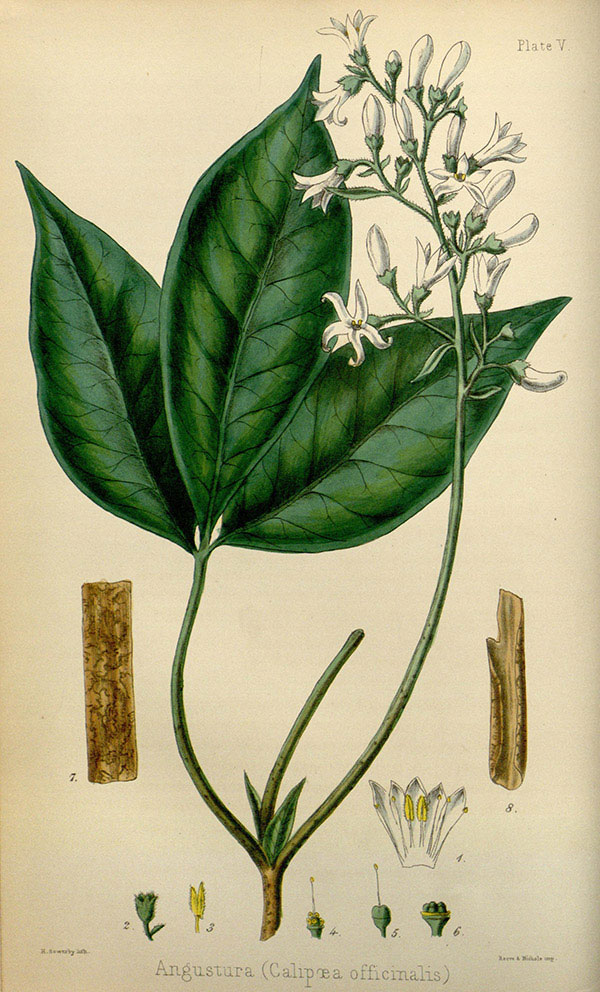 Angostura trifoliata is a relatively obscure tree that grows chiefly in South America. Characterised by its relatively tall stature and dark, compounded leaves, the tree grows to a height of ten to twenty metres, and is replete with a very thick outer bark which is commonly employed by natives as a traditional medicine. The bark is typically pared away from the tree in long, straight strips, which are afterwards dried or employed fresh. Unlike cinnamon bark which curls upon drying, angostura bark retains its straight edges, mainly due to its semi-spongy nature. When extremely dry, the bark become very brittle and can be flaked away by hand into a coarse powder, although angostura is preferably used in its whole form. [1]

Despite bearing a similar name to the popular brand of bitters known as Angostura bitters, the latter contains no angostura bark whatsoever, and is named after its place of origin – Angostura – rather than after the plant. Angostura bark has been used by the natives of South America as a medicine since ancient times, although its use as a medicinal plant outside of folkloric employment is relatively rare, with very little mention to be found in most herbals except perhaps in erroneous association with the Angostura brand of bitters. Recent interest in the angostura bark has arisen chiefly due to the discovery of certain cytotoxic (cell-killing) properties found in the bark's slew of active compounds. Furthermore, its use as a traditional medicine by natives of the area have garnered it some degree of exoticism and interest, although its relative unavailability in any but the most thoroughly stocked apothecaries make it a difficult plant to employ medicinally. It is, however, available through select online catalogues and choice herbal stores, although it can nevertheless still be difficult to obtain outside of its immediate area.

Despite being relatively unknown in the more 'modern' areas of the West, the angostura plant has been employed as an herbal medicine since ancient times by native inhabitants of North America and their subsequent descendants. Angostura is known for its highly astringent (read bitter) nature, and this, along with its name often result in its being mistaken for the chief ingredient of the Angostura brand of bitters that are produced in Angostura, Venezuela from which the latter's name is obtained.

Because of its relatively obscure uses by the local herbalists, angostura's true medicinal purposes have yet to be defined in clear terms and integrated into the pre-existing body of herbal medicine as it is known and practiced today. Folkloric usage however suggests that the bark of the angostura plant possesses potent medicinal properties.

Typically gathered from live trees via stripping, and subsequently dried prior to use to elicit a degree of preservation, angostura bark is usually prepared as a very strong decoction, taken unsweetened as a bitter tisane to ease stomach cramps, aid in digestion, and whet the appetite, following the function of all bitter tonics. [2] Its use as a bitters is further enhanced when the dried bark is allowed to macerate in an alcoholic beverage for a set amount of time, resulting in a drink that is similar in purpose (if not always in flavour) to Angostura brand bitters and others of its ilk. The effect may be further improved with the integration of other bitter herbs, as well as in emulation of typical recipes that comprise traditional bitter tonics, although the integration of other bitter plant matter may be chiefly for flavour's sake than for any further medicinal purpose, as the bark can be very unpalatable if prepared solely on its own.

Despite being relatively obscure, studies conducted on the efficacy of angostura bark's purported medicinal faculties yielded several positive results, among them angostura's apparent cytotoxic or cell-killing properties, which can be of significant use in the field of anticancer treatment, although its use for such a purpose is not (as of yet) supported by modern application, nor is it suggested by traditional usage [3]

Traditionally, the bark of the angostura plant has been used not only as a general tonic, but as an antibacterial and antimicrobial rinse, typically in the treatment of various skin disorders, and in the sterilisation of minor to major injuries. [4] A very potent decoction of the bark has also been traditionally prescribed as a cure for whooping coughs, recurrent coughing, and general pulmonary complaints. This is backed up by recent studies which show that angostura bark may also possess significant anti-tuberculosis properties thanks to its active compounds angosturin and galipine. [5]

Further uses of angostura bark, either as a tincture or as an infusion is as a remedy for malarial fever (usually employed along with, or as a substitute for cinchona, another anti-malarial and anti-pyretic herb), as well as a treatment for paralysis. [6] It is traditionally believed that the tonifying abilities of angostura bark may help to stimulate paralytic nerves and encourage quicker recovery from numbness, palsy, and tremors.

The efficiency, safety, and possible modern applications for angostura bark is still continuously being studied, although some specialty apothecaries and alternative medicine shops now sell processed angostura bark, typically in encapsulated powdered from. Whole bark may be obtained from areas where it thrives, as it is commonly sold by natives alongside other medicinal herbs. While there is as yet no standardised safety guideline with regards to its use, moderation is nevertheless encouraged. Pregnant and lactating women should forego its use, unless under the supervision of a healthcare professional or a professional and highly experienced herbalist. Individuals who are under specialised medications for the treatment of cancer or malaria should also use angostura with caution.

Names of Angostura, Past and Present