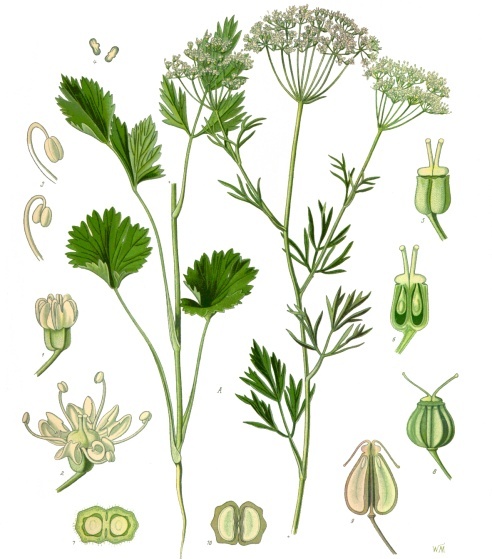 Anise is a type of herb and spice with a long history of use in both culinary and medicinal circles. Not to be confused with star anise, which is a whole other spice entirely, anise – better known as aniseed is a prime component in many Mediterranean, Arabic, Indian, and Asian dishes. Its use as a medicine dates back to the time of the Ancient Greek and Egyptians, who prized it for its seemingly preservative and curative properties.

The anise plant is an herbaceous annual that grows no more than three feet in length, typically in loamy soil. Slightly hardy (although very sensitive to transplanting and ill-drained soils), it takes on a more shrub-like appearance, and is discernable for its odd leaf arrangement. The base of the plant typically sports small, simple leaves that, upon progressing to maturity morphs into long leaves with evident shallow indentations or lobes. The anise plant is also notable for its small while blossoms, and for its small, fleshy fruit that looks more like a seed than it does a fruit-proper. The anise fruit – called aniseed – along with its leaves have been used as a spice in many parts of the world. Although said to be a native of Old Europe, the anise can be found thriving in several parts of the Americas, as well as in a great part of Asia, usually alongside star anise, to which it is often mistaken for. [1]

While it is the fruit of the plant which is chiefly employed (in dried form) as both a spice and a medicine, its leaves (and in earlier lore, even its roots) were once employed medicinally. While anise was once a widely employed herb for both culinary and medicinal purposes, the bulk of its usage nowadays has largely been replaced by the cheaper and far more common star anise, which is very similar in aroma and flavor to true anise when employed culinary, but that possesses a whole different range of medicinal properties.

Anise, better known as aniseed, is heavily employed in various types of cuisine from all over the world. It was chiefly employed to flavor, season, and cure a wide assortment of meat-based dishes in European cuisine, and featured highly in soups, stews, and casseroles. In Asiatic cusine, anise, and its alternative – star anise – is commonly integrated into beverages (both alcoholic and non-alcoholic), or otherwise used to flavor sweetmeats and meat-based dishes. Anise is even employed in the creation of a wide range of desserts chiefly because of its unique flavor profile and aroma. It may even be integrated into commonplace beverages such as chocolate, coffee, or tea. In cuisine, the greatest body that employs anise is chiefly the liquor industry, which uses it (by itself, or alongside a combination of other herbs and spices) to flavor various types of liquors. [2]

When employed medicinally, aniseed is typically brewed or decocted into a mild to moderately strong drink. Long lauded as a very potent and effective digestif, anise may be integrated into dishes to help improve its digestibility, or otherwise drunk as an after-meal tisane to help in digestion and, overall, in the better absorption of nutrients from meals. Because of its very potent nature, decoctions are chiefly relegated to the very mild, and infusions of the spice are more popular than the highly astringent and often unpalatable liquors that result from decoctions.

When infused and combined with honey and ginger root, aniseed tea is a perfect remedy for alleviating the symptoms of smoker's cough, bronchitis, and emphysema. A tea made from aniseed alone may be drunk to help ease discomforts associated with muscular cramping, as is the case with menstrual cramps; it may even be helpful for relieving bloating, gas, and dyspepsia. In Egyptian herbal medicine, anise is prescribed for nursing women in the belief that it acts as a galactagogue, while in Ayurvedic medicine it is sometimes employed as an antiseptic and a carminative. [3]

The essential oil derived from anise has even been employed in as a remedy for head lice. A faster method would be to simply create a very strong decoction of aniseed, and the ensuing liquor subsequently cooled and applied as a topical hair rinse. This can be fortified with the addition of rosemary, oregano, and ginger root. This topical rinse has even been used as a remedy for psoriasis and scabies. [4] While aniseed makes for a potent antiseptic, its prolonged use, especially for the treatment of open wounds has potentially toxic repercussions. Due to this (somewhat mild) toxicity, the internal use of aniseed for prolonged periods of time, or in very large and concentrated dosages is highly discouraged.

In magickal practices, aniseed is employed to enhance psychic ability. Because of its visual resemblance to tiny eyes, it has even been used as a type of charm to ward off bad luck, hexes, and the Evil Eye. It is commonly employed in shamanic magick as a preliminary to any kind of spirit work, and is sometimes brewed as a tea to help improve psychic awareness, or to encourage psychic trances (the latter, usually in combination with a select range of other herbs). Aniseed may even be burnt as incense to help increase the efficiency of invocations, usually when combined with myrrh, dragon's blood, and frankincense. Made into a sachet, aniseed is said to help to ward off bad dreams, especially when kept under a pillow. [5]

Names of Anise, Past and Present