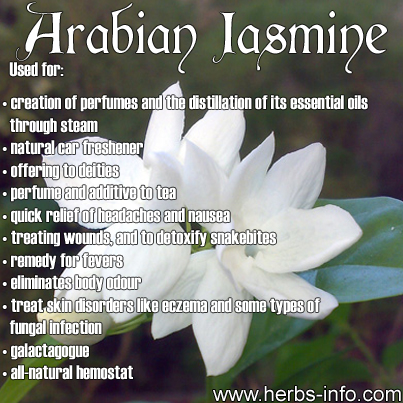 Sambac jasmine, or Arabian jasmine as it is often referred to, is a native species of jasmine found in the Southern and Southeastern parts of Asia, where it has been used as an ornamental, ceremonial, and medicinal plant for upwards of five-hundred years. Originally harvested wild by early civilizations, it has since been cultivated by a number of cultures mainly for its fragrant flowers, which have been employed since ancient times as a perfume and an incense, as well as for its medicinal leaves and flowers. It is the national flower of the Philippines.

Contrary to its name, Arabian jasmine was not originally cultivated in Arabia, although its associations with the place may have something to do with its popularity with the Indian communities in Arabia, who chiefly employ the plant as a perfume and incense, and as an article for religious ceremonies as well as the possibility of its being popularized within the area by mendicant Persians who held the plant's aroma in high esteem. Arabian jasmine is characterised by its shrub-like appearance. It is a small, compact plant typically growing (at the most) three metres tall, and is replete with very fragrant small white to ivory-hued flowers and tiny, broad, glossy leaves[1].

Arabian jasmine is chiefly employed as an ornamental flower, especially when grown in gardens – typically in small plots, as they readily scent the area with their exquisite aroma once the flowers are in bloom. Just like jasmine-proper (Jasminum officinale) however, Arabian jasmine is also cultivated for its flowers, which have been employed since ancient times for a wide variety of purposes.

The most common use of Arabian jasmine blossoms is in the creation of perfumes and the distillation of its essential oils through steam. In earlier times, the essence of the flower was usually obtained through enflourage or slow maceration in a base oil, although nowadays, it is obtain through more modern methods. Aside from its use as a perfume, Arabian jasmine blossoms are usually cultivated and collected by small families or individuals are strung up into strings to be sold on the streets as a natural car freshener, or as an offering to deities, as is commonly practiced in several parts of India, Indonesia, and the Philippines[2].

Among the most well-known uses of its blossoms however is as a perfume and additive to tea. In Chino-Philippine communities, and in Indo-Filipino groups, Arabian jasmine is typically mixed with green tea (Camellia sinensis) to boost its aroma and to improve its flavour. This version of 'jasmine tea' is typically served in traditional Chinese tea shops or similarly themed restaurants.

Medicinally, Arabian jasmine has been used by many an herbalist, typically to promote the quick relief of headaches and nausea through inhaling its soothing aroma. The roots of the plant were used by Filipino witchdoctors and shamans to treat wounds, and to detoxify snakebites by chewing the dried or fresh root and applying the macerated material directly unto the wound. Many Filipino tribes have employed a strong decoction of its leaves and flowers as a remedy for fevers, as well as an overall body and hair rinse that not only imbues one's person with its unique and attractive scent, but effectively eliminates body odour and helps to treat skin disorders like eczema and some types of fungal infection. A mild tea made from an infusion of either the flowers or the leaves have been used in both Traditional Chinese Medicine and Filipino herbal medicine as a galactagogue. The leaves and the roots of the plant, when pounded, may even be used as a ready all-natural hemostat, or, if mixed with coconut oil or some other base oil, as a poultice to help in bone-setting[3].

In folkloric Filipino medicine, the leaves and the flowers of the plant were believed to improve the attractiveness of a woman, and so bruised or pounded leaves and flowers, or an oil infused with the essence of its flowers were not simply used to scent one's person, but was rubbed on the breasts and privates of a woman to 'increase her desirability'. This oil has also been used to scent hair, and is employed by both men and women of many tribes, usually mixed with other sweet-smelling flowers like hibiscus and lilac. The leaves and flowers are commonly employed while still fresh, although dried flowers used to flavour drinks, and to make medicated rinses, tisanes, and even douches can also be made[4]. A very mild decoction of the flowers may be used as eye drops to treat sore eyes, conjunctivitis, and minor problems with vision, while powdered dried flowers mixed with potassium alum or talcum may be used as a natural deodorant and bath salt.

A group of Malaysian researchers investigated recently in 2012 the gastroprotective property of the ethanolic extracts of Arabian jasmine (Jasminum sambac) leaves against acidified ethanol-induced gastric ulcers in seven groups of rats. In this study, the mechanism by which these gastroprotective effects of the ethanolic leaf extract from Jasminum sambac occur against gastric mucosal injury was evaluated, and the following areas were assessed: acidity of gastric content, the gastric wall mucus, ulcer areas, and histology and immunohistochemistry of the gastric wall. [5]

Mucosal injury of significantly severe nature was observed in the ulcer group, while those administered with omeprazole (a proton pump inhibitor used to decrease the amount of gastric acid in conditions such as gastroesophageal reflux disease (GERD) or in cases of Helicobacter pylori-induced gastric ulcer [6]) or Jasminum sambac ethanolic leaf extract demonstrated significant protection from any gastric mucosal insult. The study revealed that the ethanolic extracts of Arabian jasmine (Jasminum sambac) leaves render effective protection against ulcer or forms of gastric mucosal injury, as evidenced by a considerable decrease in gross ulcer area and a reduction of edema and leukocyte infiltration of the submucosal layer per histological analysis. [5]

In a study by Manokaran (2011), the in vitro antioxidant scavenging activity of methanolic extract of Jasminum sambac flower against free radicals was evaluated using a number of assays. Results showed that at 2.5mg/ml concentration, maximum inhibitory activity by the extract was detected, the percentage of inhibition being dependent on dose, as compared to standards such as butylated hydroxytoluene (BHT), vitamin C, vitamin E, and rutin. [7]

Different kinds of terpenoids, irridoid glycosides, saponins, and flavonoids are found in Arabian jasmine. The leaves contain quercetin, mannitol, a-amyrin, and ﬂ-sitosterol, while its roots have oleanolic acid, hesperdin, and both iridane triol and iridane tetraol. Moreover, the flowers have many pyridine and nicotinate constituents. [11]

Arabian jasmine blossoms play an integral role in Filipino shamanism, where it is often employed as offerings to departed ancestors – a practice that continues to thrive in the Catholic community of the Philippines to this very day. Dried and burnt as incense, its flowers were used to make love-charms and love potions (referred to locally as 'gayuma', an enchantment similar in some respects to the Voodoo practice of 'fixing'), while its roots or flowers (sometimes a combination of both) were steeped in coconut oil and slathered over the body to incite passion and desire and to act as an aphrodisiac. [4] It may also be steeped in coconut toddy or rice wine and drunk as a tonic.

Names of Arabian Jasmine, Past and Present