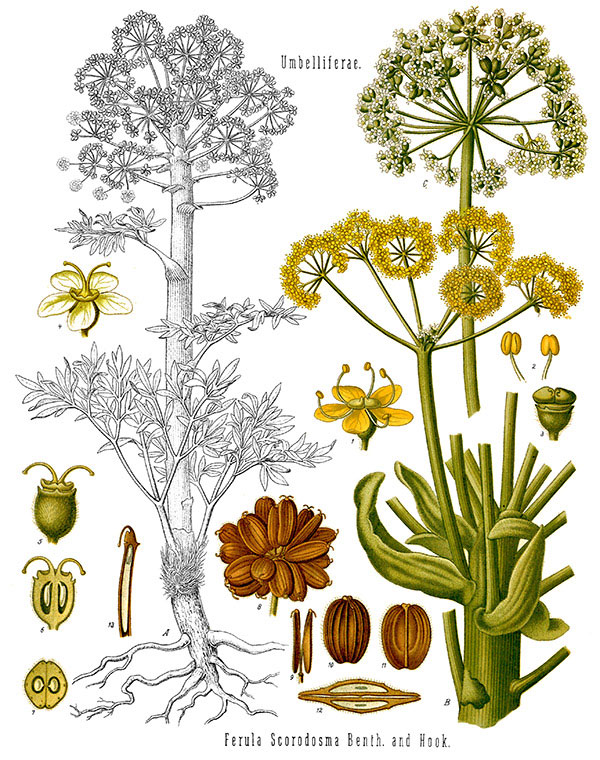 Considered among one of the most notorious of spices, asafoetida is well-known for its unbearably intolerable stench that borders on the sickening, especially for individuals who are unused to its smell. Because of its unpleasant odour, it has been popularly called 'Devil's dung', or any variant of that moniker by many Western and some Eastern cultures.

Asafoetida is a resinous spice that is derived from the root of several species of the Ferula genus, an herb which thrives in several areas, among then Afghanistan, India, and Arabia. It has a long history that dates back to ancient times, it being employed primarily as a magickal ingredient in Ancient Egypt, India, and later on, in Rome, and, as history progressed, its uses expanded to the medicinal and the culinary.

Historically, there is one other plant that shares similar properties and purposes as true asafoetida, that being the now extinct and nearly mythological silphium of Cyrene, which is described by Dioscorides as 'the Cyrenaic kind' of asafoetida – a tad erroneous considering the fact that silphium, while similarly pungent as asafoetida, is finer in scent and taste than the former and not as overbearing or generally unpleasant despite its being in the same genus as true asafoetida.

With the due extinction of silphium, herbalists, cooks, and ceremonial magicians soon employed asafoetida for as much the same purpose as silphium was before it, and it became very commonplace not only in Asia (where it is a common culinary addition), but in many places throughout the Mediterranean, until all access (and subsequently, interest) to it via consignments from Iran and the Spice Road was cut-off after the fall of the Roman Empire. [1]

The most common use for asafoetida is as a spice added to foods as a substitute for onions or garlic, for while the spice is unbearably odious when raw (so much so that it has even been used to punish or humiliate individuals), it exudes a very pleasant aroma when cooked redolent of leeks, with a flavour reminiscent of sautéed garlic or onions. Because of this, asafoetida is commonly employed by individuals whose religions or beliefs forbid the consumption of garlic or onions such as the members of the Hare Krisha Movement, or by people under the Jain, Sikh, or Vaishnava faith (these latter may or may not have any religious restrictions against the consumption of onions or garlic, but nevertheless employed the use of asafoetida, perhaps for flavour and aroma alone, and for its ready availability). [2]

Aside from its culinary uses, asafoetida may also be employed medicinally. It goes without saying that its medicinal purposes go hand-in-hand with its culinary applications, as the most important benefit that can derived from using asafoetida as a culinary spice is in its ability to aid in digestion and to help reduce the cases of dyspepsia and flatulence. Asafoetida features very frequently in Ayurvedic medicine, and, centuries ago, even in European herbal medicine until its eventual disuse following the Fall of Rome. While other herbal remedies are preparing using specific procedures (i. e. decoction, infusion, maceration, etc.), asafoetida is an exception in that it only need be included in a dish for one to reap its medicinal benefits. It is commonly mixed with dishes fed to young children to boost their immune systems and help ward off sickness, as it acts as a natural antibiotic. This belief is not unfounded, as asafoetida was used during the 1918 Spanish influenza pandemic as a medicine to help counter the scourge of the disease. Studies have been conducted which confirmed that asafoetida indeed acted as a natural antiviral drug which may be employed not only to boost the immune system, but to treat several strains of influenza as well as general illnesses such as colds, coughs, and fevers. [3]

Traditional and folkloric recipes that are outside of its culinary integration also abound, especially in the Indian subcontinent and other parts of Asia where it is used as an inhalant to help soothe and relieve individuals who suffer from asthma and bronchitis. [4] Because of its potent and pungent odour, raw asafoetida works as a highly effective decongestant. [5] It may also be decocted (although such preparations are rare) or otherwise steeped in oil to be used as a liniment to relieve colic and indigestion by a topical application, or made into a tincture as is the practice in Thailand, Malaysia, and Indo-China. Sniffing asafoetida, or even using raw asafoetida as an incense is even said to help alleviate the symptoms of depression, anxiety and fatigue.

The oleo gum resin of asafoetida, or asafetida (Ferula asafoetida), has long been traditionally utilized as a digestive aid and as among the alternative treatment regimens for respiratory conditions such as bronchitis, asthma, whooping cough (or pertussis), and infantile pneumonia; some nervous conditions; hysteria; and flatulent colic. This herbaceous plant has a broad spectrum of beneficial properties of clinical use, being antispasmodic, carminative, expectorant, laxative, sedative, blood-thinning, and blood pressure-lowering all in one. [6]

Across the globe, asafoetida is used in a variety of ways to remedy diverse symptoms or conditions. For example, in Afghanistan, the hot water extract of asafoetida dried gum is commonly suggested in cases of hysteria, whooping cough, and ulcers. [7] In China, asafoetida decoction is orally administered to eliminate or expel parasitic worms (antihelminthic), [8] while in Morocco, it is among the standard herbal drugs for epilepsy. [9]

In 2000, Indian researchers Agrawal, Rao, Sairam, Joshi, and Goel investigated the anti-ulcer effects of three out of the ten herbal drugs composing Dipaniya Mahakasaya, including Ferula in colloidal solution. This Ferula colloidal solution (at a dose of 50 mg/kg, orally administered 60 min prior to the experiment) demonstrated significant protection against gastric ulcers, which is assumed to be a result of augmented mucin secretion and decreased cell shedding. [10] In another study conducted in 2004 by Fatehi, Farifteh, and Fatehi-Hassanabad, Ferula asafoetida gum extract was shown to decrease the spontaneous contraction of the ileum of guinea pigs to 54 +/- 7% of control. This study concluded that the relaxants found in Ferula asafoetida interfere with a number of muscarinic, adrenergic, and histaminic receptor activities or with calcium ion movement associated with smooth muscle contraction. [11]

Aside from being antispasmodic, asafoetida also exhibits anti-hypertension or vasodilatation properties. [12] When administered to anesthetized rats at doses of 0.3-2.2 mg/100 g b.w., asafoetida gum extract was observed to decrease the mean arterial blood pressure. [11] Asafoetida produces significant relaxation of smooth muscles such that it may lower the blood pressure. [13]

A study by Ramadan N.I. and Al Khadrawy F.M. (2003) indicated that asafoetida exerts a potent antiparasitic effect against Trichomonas vaginalis, the protozoan responsible for trichomoniasis (a common cause of vaginitis) , [14] when compared to metronidazole, an antibiotic. [15] The dried gum resin of asafoetida was also shown to have a deterring effect against both Clostridium perfringens and Clostridium sporogenes, [16] while the essential oil from its rhizome at a concentration of 400 ppm manifests properties against Microsporum gypseum (a fungus associated with tinea corporis and tinea capitis [18]) and Trichophyton rubrum (a common causative agent of athlete's foot, jock itch, and ringworm [17][19]

Asafoetida contains a bounty of vitamins and minerals such as calcium, phosphorus, iron, carotene, riboflavin, and niacin. [6] Below is a list of some of the active ingredients that are, according to research findings, the chemical constituents behind asafoetida's pharmacological properties:

• Ferulic acid (an antioxidant with anti-inflammatory activities [20] and synergistic protective action against oxidative stress in skin and, by extension, photoaging and skin cancer [21])

• a-Pinene (with anticancer and anti-inflammatory properties [6])

• Luteolin (a flavonoid with several biological activities such as being anti-inflammation, antiallergy, and anticancer [23])

Because its smell was so powerful, it was thought in ancient times that this power extended to the spirit world. As a result, asafoetida has a long history of magickal uses. It can be worn (raw) as an amulet to ward off hexes, curses, and evil entities, as well as sickness, although one may jokingly think that it is the repulsive stench that wards such malaises away, and not any true magickal property. In Abrahamic, Kabbalistic, Mosaic, and ceremonial magick, raw asafoetida was employed in ancient rites as an incense to ward off as well as grant power over demons. [6] It was often employed or incorporated in the creation of a magickal circle, which is said to be twice as powerful and doubly impermeable to demonic powers. In some shamanic practices, asafoetida is commonly added (dried / heated) to medicine pouches to once again ward off evil and illnesses, or, as in the case of Haitian voodoo and Jamaican hoodoo traditions, it is often made into a paste and applied to newborns to protect them from curses, other otherwise prepared as an incense, a sprinkling powder, or a draught which can either be used to ward and protect or curse, whoever the shaman, voudun or voodoienne envisions or unleashes the spell unto.

Names of Asafoetida, Past and Present