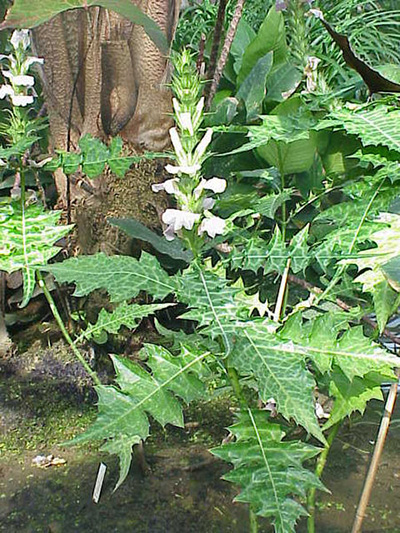 Other names for Bears Breech, Past or Present

This plant belongs to the genus Acanthus (Greek:Akantha); it is also referred to as "Acanthus." The "Leaves of Acanthus" are found throughout the art and architecture of the ancient Greeks and Romans;[1] according to historical record, the Corinthian leaf motif was modeled after this plant.[2]

Historical documents indicate that the leaves and roots of the Bears Breech plant were boiled and taken as tea, to remedy such conditions as constipation, fever, and gout. Bears breech is also described as being prepared as poultice, which was applied externally to aid in the healing of scars and to restore moisture to dry skin.

Bear's Breech is mentioned in the Bible as a treatment for sores and wounds.[3]

Elizabeth Blackwell's "A Curious Herbal" (1751): 1. The stalks grow to be two foot high, the leaves are a shining dark green colour; the flowers are white. It is said that the ancients took the pattern of their foliage work from the leaves of this plant.
2. It is cultivated here in gardens; its native place being Italy, Spain and the Southern Part of France; it Flowers in July. 3. This plant is used in glisters and baths for obstructions; and for the Stone and Gravel. The Herb Women sell the leaves of the Helleboraster, or Bears-Foot, or Sphondylium, or Cow-parsnep instead of this plant, to those that are ignorant.

Nicholas Culpeper - "The English Physician, enl. with three hundred and sixty-nine medicines made of English herbs, not in any former impression of Culpeper's British herbal, containing an astrologo-physical discourse on the various herbs of this nation: Illustrated with correct copper plates of the most useful and remarkable plants, to which is added The Family Physician and A Present for the Ladies, containing the best remedies for every disease incident to the human body" (1809):

Beside the common name Brank Ursine it is also called Bears breech and Acanthus tho I think our English names to be more proper; for the Greek word Acanthus signifies any thistle whatsoever.

Description: This thistle shooteth forth very many large, thick, sad green smooth leaves upon the ground, with a very thick and juicy middle rib; the leaves are parted with sundry deep gashes on the edges; the leaves remain a long time before any stalk appears afterwards riseth up a reasonable big stalk, three or four feet high, and bravely decked with flowers, from the middle of the stalk upwards; for on the lower part of the stalk there is neither branches nor leaf; the flowers are hooded and gaping, being white in colour and standing in brownish husks with a long small undivided leaf under each leaf; they seldom seed in our country. Its roots are many, great and thick; blackish without, and whitish within, full of clammy sap; a piece of them, if you set in the garden den, and defend it from the first Winter cold, will grow and flourish.

Place: They are only nursed in the gardens in England where they will grow very well.

Time: It flowereth in June and July.

Government and Virtues: It is an excellent plant under the dominion of the Moon. I could wish such as are studious would labour to keep it in the gardens the leaves being boiled and used in clisters are excellent; good to mollify the belly and make the passage slippery; the decoction drank inwardly, is excellent and good for the bloody flux; the leaves being bruised, or rather boiled, and applied like a poultice, are very good to unite broken bones, and strengthen joints that have been put out; the decoction of either leaves or roots being drank, and the decoction of leaves applied to the place, is excellent good for the king's evil that is broken and runneth; for by the influence of the Moon, it reviveth the ends of the veins which are relaxed, there is scarce a better remedy to be applied to such places as are burnt with fire than this, is for it fetches out the fire, and heals it without a scar; this is an excellent remedy for such as are bursten, being either taken inwardly; or applied to the place; in like manner used it helps the cramp and the gout; it is excellent good in hectic fevers, and restores radical moisture to such as are in consumptions.

John Lew Shecut "Flora Carolinæensis - A Historical, Medical, and Economical Display of the Vegetable Kingdom; According to the Linnaean, or Sexual System of Botany" (1806): ACANTHUS, Bear's Breech or Brank Ursine, a genus of the Didynamia Angiospermia Class, ranking in the 4th Natural Order Personattae of Linnaeus. The calix is a perianthium with leaflets of 3 alternate pairs, unequal and persistent; the Corolla is one petaled and unequal, the tubus very short, closed with a beard; no upper lip; the under one very large, flat, straight, very broad; three lobed and obtuse. The Stamina have lour subulated filaments shorter than the Corolla; the two superior rather longer recurvate and incurved at the top. The Anthera are oblong, compressed, obtuse, lateral, parallel, and villous before. The Pistillum has a conic germen, a filiform stylus; the length of the Stamina and two acute lateral stigmata. The Perianthium is an acutely-ovated bilocular capsule with a lateral partition; the seeds one or two fleshy and gibbous. These plants are famous for having given rise to the capital of the Corinthian Order of Architecture. There are 5 species:

1. A: MOLLIS. (Satvia) Common Bear's Breech, a native Italy, and is the sort used in Medicine.
Part used: the leaves.
Sensible Properties: all the parts have a soft sweetish taste and abound with a mucilaginous juice.
Medical Virtues: It does not seem to differ from those of the Althea and other mucilaginous plants.

2. A: SPIXOSUS, or Prickly Bear's Breech, the leaves of which are deeply jagged in very regular order, and each segment is terminated with a sharp spine as are also the footstalks of the leaves and the empalement of the flowers which render it troublesome to handle them.

3 A: ILICIFOLIUS or Shrubby Bear's Breech, a native of both the Indies, it is an evergreen shrub which rises about four feet high and is divided into many branches garnished with leaves like those of the common Holly, and aimed with spines in the same manner, the flowers are white and shaped like those of the common Acanthus but smaller. This and the foregoing are propagated either by seeds or offsets from the rocts. The seed should be sown about the end of March in a light soil they require but little care but to be kept clear from weeds.

4. A: NIGRA, or Portugal Bear Breech, with smooth sinuated leaves of a livid green colour.

5. A: MEDIA, Middle Bear's Breech, with entire leaves having spines on their border, is supposed to be the Acanthus of Dioscorides. These last are propagated only by seeds, and require more care than the former. The seeds do not ripen in Europe. 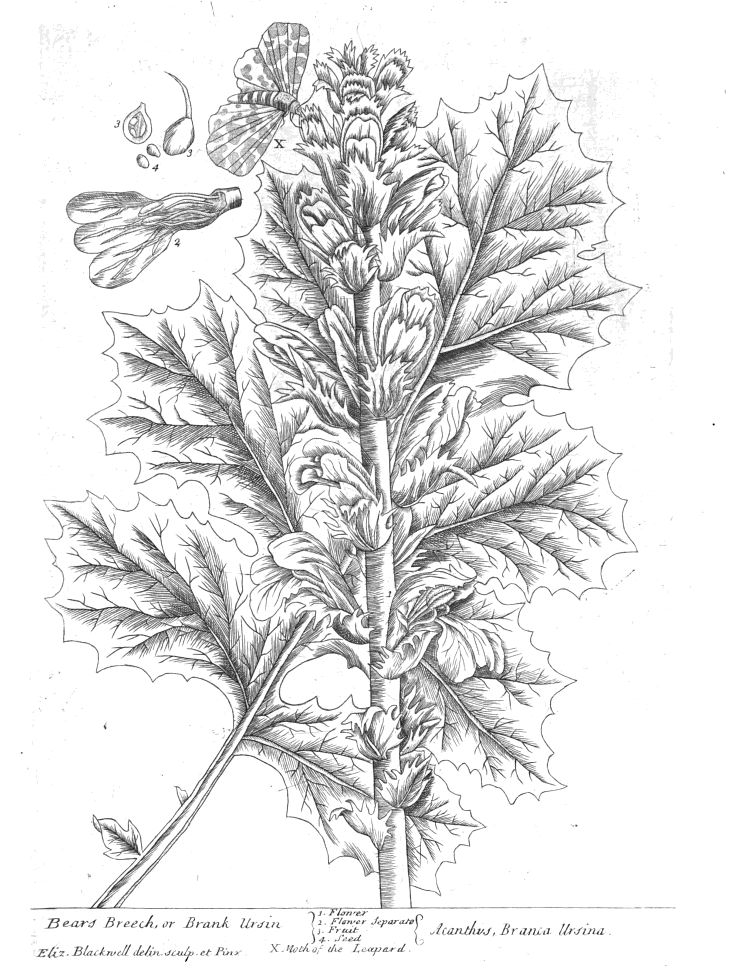