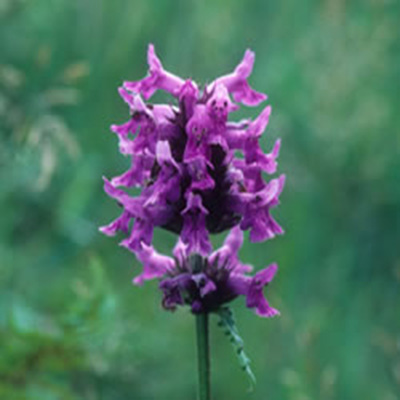 Betony is a perennial herb that blooms in July and August. [1] Indigenous to Europe, western Siberia and northern Africa, it is widely cultivated today.

In European folk medicine, betony was used to rid the body of intestinal worms, to relieve chest pain, and to instill a sense of calm. [2]

The plant's juices are considered to be effective in healing cuts and external ulcers, and it has been considered by modern physicians to have a certain degree of usefulness in treating pharyngitis (sore throat). [1]

Although betony has been described as useful in cases of asthma and bronchitis, heartburn, kidney infections and intestinal parasites, modern medicine recognizes no benefit save for its apparent usefulness as an astingent. [1] Claims about betony have been historically documented but have very little scientific support [2] -- the plant's tannins, alkaloids, glycosides, and volatile oil has not been sufficiently researched. While studies conducted in Russia suggest that betony may promote lactation, details of these studies have not been made accessable to the public. [2]

According to a 2013 study conducted by researchers Jalilian, Modarresi, Rezaie, Ghaderi and Bozorgmanesh, the aerial parts of wood betony (AWB) demonstrate considerable efficacy and safety (development of adverse reaction at 0.40 time odds) in managing abnormal uterine bleeding associated with polycystic ovary syndrome. [3] Polycystic ovary syndrome is a hormonal problem in women characterized by a constellation of signs and symptoms, most remarkably irregular bleeding due to the overabundance of uterine lining as a result of hormonal imbalance. [4] This study compared the effects of the aerial parts of wood betony and medroxyprogesterone acetate (a drug commonly prescribed for secondary amenorrhea, abnormal uterine bleeding caused by a hormonal imbalance, and endometrial hyperplasia in postmenopausal women [5]) in a randomized clinical trial composed of 66 women aged 15-45 years, the clinical symptoms of whom were observed before and 3 months after the initiation of treatment. Using generalized linear models, results revealed that a decrease from 2.5 (95% CI, 0.2-40.2) to 0.7 (95% CI, 0.0-12.1) in prevalence rate of different patterns of bleeding was observed in participants administered with aerial parts of wood betony, as compared to the decrease from 2.7 (95% CI, 0.6-48.0) to 1.1 (95% CI, 0.1-18.3) for patients taking medroxyprogesterone acetate. [3]

The essential oil of betony (Stachys of?cinalis) was also tested and proven to be active against three Gram-positive and three Gram-negative bacteria in a study done by Grujic-Jovanovic, Skaltsa, Marin, and Sokovic (2004). [6]

In another study done by Hajdari, Mustafa, Franz, and Novak (2011), the leaves of betony were also determined to contain the following [9]:

The essential oil derived from betony's inflorescences, as analyzed by this study, was also shown to contain the following substances, the percentage of alpha-pinene and (E)-caryophyllene content being higher in the inflorescences than in the leaves [9]:

A number of glycosides can also be isolated from the aerial parts, most of which have been thoroughly analyzed from phytochemical studies. These include betonyosides A-F and acetoside, acetoside isomer, campneoside II, forsythoside B, and leucosceptoside B. [0] A Japanese study has determined that acetoside in betony has an antinephritic effect and may thus be a useful therapeutic regimen against rapidly progressive glomerulonephritis. [10] An abundance of data have also indicated that forsythoside B has an antisepsis effect by means of modulation of a variety of local and systemic inflammatory factors. [11] In addition, forsythoside B has been shown to have a cardioprotective effect against myocardial ischemia-reperfusion injury as a consequence of its ability to limit the inflammation response and of its antioxidant properties. [12]

Elizabeth Blackwell's "A Curious Herbal" (1751): 1. It grows to be eighteen inches high, the leaves are a deep green, and the flowers a red purple. 2. Betony grows in woods and thickets and by hedge-sides, and flowers in May and June. 3. It is accounted a good cephalic, hepatick and vulnerary plant. The ancients had it so much in esteem that Antonius Musa, Physician to Augustus Caesar, wrote a whole treatise on it. The leaves dried and mix'd with Wood-Sage and Ground-Pine, it makes a good diet Drink for the Gout and Rheumatism. The fresh leaves bruised are good for green wounds and to draw out splinters. The officinal preparations are the conserve of the flowers, and the emplastrum de Betonica.

William Thomas Fernie - "Herbal Simples" (1895): BETONY - Few, if any, herbal plants have been more praised for their supposed curative virtues than the Wood Betony (Stachys Betonica), belonging to the order of labiates. By the common people it is often called Bitny. The name Betonica is from the Celtic "ben," head, and "tonic," good, in allusion to the usefulness of the herb against infirmities of the head. It is of frequent growth in shady woods and meadows, having aromatic leaves, and spikes of light purple flowers. Formerly it was held in the very highest esteem as a leading herbal simple. The Greeks loudly extolled its good qualities. Pliny, in downright raptures, styled it ante cunctas laudatissima! An old Italian proverb ran thus: Vende la tunica en compra la Betonia, "Sell your coat, and buy Betony;" whilst modern Italians, when speaking of a most excellent man, say, "He has as many virtues as Betony."
In the Medicina Britannica, 1666, we read: "I have known the most obstinate headaches cured by daily breakfasting for a month or six weeks on a decoction of Betony, made with new milk, and strained." And Dr. Meyrick, who was an authority in his day, testified strongly to the same effect.
For a similar purpose the flowers and leaves have been dried and smoked as tobacco. When powdered, they formed an ingredient in Rowley's British Herb Snuff, which was at one time quite famous against headaches.
And yet, notwithstanding all this consensus of praise from writers of different epochs, it does not appear that the Betony, under chemical analysis and research, shows itself as containing any special medicinal or curative constituents. It only affords the fragrant aromatic principles common to most of the labiate plants.
Parkinson, who enlarged the herbal of Gerard, found the leaves and flowers of Wood Betony, "by their sweet and spicy taste, comfortable both in meate and medicine." Anyhow, Betony tea, made with boiling water poured on the plant, is a safe drink, and likely to prove of benefit against languid nervous headaches; and the dried herb may be smoked as tobacco for relieving the same ailment. Both this plant, and the Water Betony - so called from its similarity of leaf - bear the name of Kernel wort, from having tubers or kernels attached to the roots, and from being therefore supposed, on the doctrine of signatures, to cure diseased kernels or scrofulous glands in the neck; also to banish piles from the fundament.

Other names for Betony, Past or Present 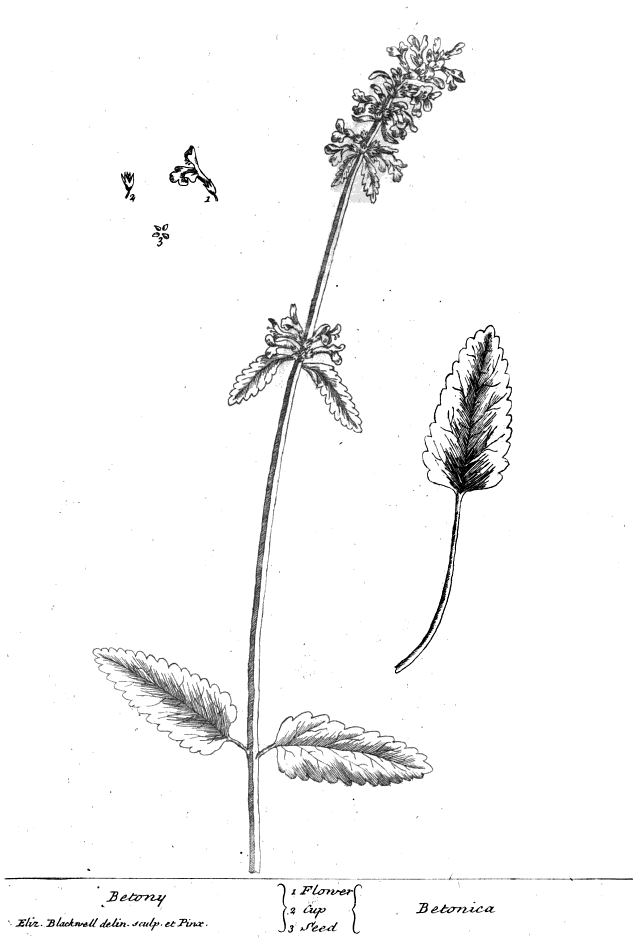