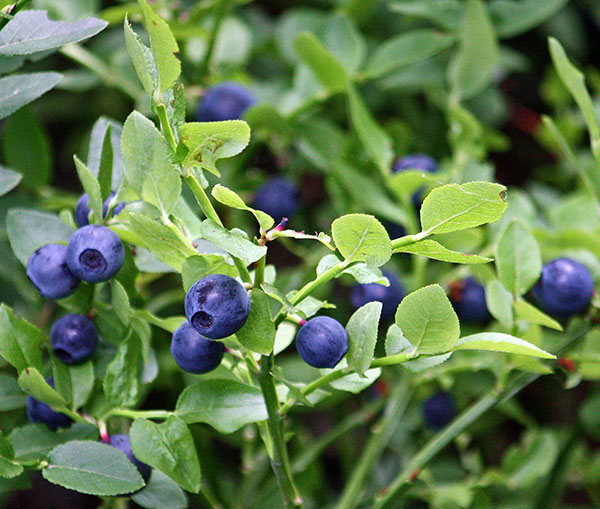 Bilberries are rarely a cultivated plant (although successful attempts at cultivation are not altogether unheard of), and is more often than not wildcrafted due to the fact that they are quite difficult to grow. Bilberries grow in temperate to subarctic areas, often in highly acidic, nutrient-poor soils which obtain moderate amounts of sunlight and long periods of cold. Wild bilberries are distinctly noticeable for their pale-green to bright-green foliage as well as their low-lying nature. Most wild bilberries grow no taller than waist-high, although some older shrubs, if left un-harvested can and will grow taller. Because of their penchant for colder weather, bilberries are more often found in European and Eurasian countries, where both fresh, locally harvested bilberries, and frozen wildcrafted billberries are available (the former only during peak seasons, and the latter all-year-round). Bilberries are also found in temperate climates in Asia such as in China, Japan, and Korea, although bilberries are an introduced plant for the former two, while there are wild 'bog bilberries' to be found in both North and South Korea, respectively. In some European countries, wild bilberries are fair game for anyone with a mind to pick them. Places like Finland, Norway, and Switzerland, as access to bilberries are under 'everyman's right', with the exception of lands which are protected (i. e. private gardens and nature reserves). In other areas however, such rights are not applicable. [2]

While bilberries are chiefly cultivated for their berries, the leaves of the plant have been, and still are employed by traditional herbalists as a medicine along with the berries themselves. In most cases however, the berries are seemingly exclusively cultivated for human consumption, and because they tend to be somewhat smaller, and a tad softer than blueberries, harvesting them via semi-mechanical or assisted means is something of an impossibility, with most fruits berries either locally or commercially sold being harvested generally by hand. As with most berries however, bilberries are generally employed for culinary purposes more so than medicinally, with the bulk of every harvest generally used for human consumption in whatever form.

The most popular (and perhaps the most prolific use) of bilberry is in its edibility, whereby the fruits in fresh or dried form are often employed as a snack-food or a prime ingredient in foodstuffs. As with most berries, bilberries are either made into jams, jellies, or some other variant of preserves, or otherwise consumed fresh. When dried, it may be stored and consumed in much the same way as raisins. Bilberries can also be juiced, with the extruding liquid being stored for future use. The fruits of the plant possess the full range of versatility of all berries, and may be used as a food in its own right, as an integral ingredient in pastries and desserts, or as a condiment for other foods. Foodstuffs which contain bilberry are known for their highly nourishing and energising nature, which is why it is often consumed as a breakfast meal or as sustenance after a long rigorous day. [3]

Regardless of its employment in whatever form, the berries are highly nutritive, with the consumption of the berries in itself being medicinal. Since ancient times, the berries have been eaten as a nutritive food that helps to boost overall health. Bilberries, like blueberries, are often consumed as a health food (the dried varieties being partaken of as a food supplement) in order to help manage high blood pressure, improve heart health, boost the immune system, and treat various diseases such as angina pectoris, indigestion, and malnutrition (the latter in tandem with other highly nutritious food). [4] When crushed and applied topically, the berries are said to help treat a number of various skin conditions (excessive oiliness, dryness, or flaking) and cure fungal and bacterial skin disorders (i. e. shingles, eczema, etc.). [5] The berries, when extruded into a juice, is even employed for the treatment of urinary tract infections, kidney and liver disorders, pancreatitis, gastrointestinal problems, diabetes, osteoarthritis, and chronic fatigue syndrome. [6] Prior to the modern day, bilberries were prescribed as a supposed remedy for macular degeneration, cataracts, and an assortment of other eye problems. It was believed that regular consumption of bilberries helped to improve eyesight and allay such macular disorders. It is now known that the anthocyanin and carotenoid contents of the berry are far too low to actually statistically help improve eyesight, although a moderate consumption of the nutrient-dense fruit may help improve health on an overall basis enough for the body to actually combat the onset of such diseases.

The berries are often made into food supplements through drying and powdering the whole berries, subsequently encasing the powdered matter into gelatin capsules. This food supplement is often taken for its antioxidant properties, as well as for its tonifying, cardio-protective, and nourishing properties. Like a majority of other berries, bilberry possesses very significant amounts of antioxidants, and can be employed as a supplement to address diseases such as cancer, reverse the hardening of the arteries and the ravages of stress, as well as to bolster flagging health. Foodstuffs containing fresh or dried berries have along been given as a cure to diseases such as colds, flu, fever, cough, and general malaise.

It is not only the berries which are prized for their nutritive properties, as the leaves of the plant have also been employed since ancient time as a medicine in its own right; it being decocted and given as a remedy for coughs and cold. Stronger decoctions of the leaf are even prescribed to help lower blood pressure and treat dizzy spells. A tisane made from bilberry leaf is even reputedly helpful for lowering blood pressure and stabilising erratic blood sugar levels. Very mild decoctions of the leaf is employed for curing stomach pains, while moderately strong decoctions are used to treat chest pains, circulatory problems, and aches and pains brought about by arthritis. [7] When employed as a supplementary medicine, it is believed to help treat diabetes. Like the fruits, a topical application of a very strong decoction of the leaves may help to cure various skin diseases and hasten the healing of wounds, and, if employed as a mouth rinse, can even be used to treat cold sores, canker sores, and halitosis. [8]

Bilberries have long been considered as protective herbs. When employed esoterically, the dried leaves may be powdered and sprinkled around the perimeters of a household or otherwise burnt as an incense to protect the inhabitants within from malign forces and to drive away negativity. An incense of bilberry leaves is also said to generate luck and facilitate in the acquisition of material desires or wealth. The leaves may be encased in a medicine pouch or juju bag and carried upon one's person during travelling to protect one from harm. When worn next to one's skin, it is said to effectively nullify nearly all forms of psychical attacks. The protective properties of the leaf are also possessed by the berries, and it is said in folklore that eating foodstuffs containing the berry effective de-hexes a person of any spell or enchantment. [9]

The consumption of these berries in whatever form is generally deemed safe, even in slightly large amounts, although as with other fruits, excessive consumption may result in indigestion, diarrhoea, or general stomach upset. The leaves however should only be consumed as a supplement or medicine in minute doses, as it may compromise the ability of the body to properly synthesise sugar. Excessive consumption of the leaf for prolonged periods may result in hypoglycemia for diabetic patients. Patients who are under blood-thinning medication or anti-depressants of any sort are also advised to limit, if not altogether do away with the consumption of bilberries in berry or leaf form, as it may interact negatively with their medication.

As a general rule, pregnant and nursing women should limit their intake of bilberry berries, and wholly abstain from the consumption of the leaf as a supplement or medicine in whatever form until the terminus of pregnancy or nursing.

Bilberry - Other Names, Past and Present