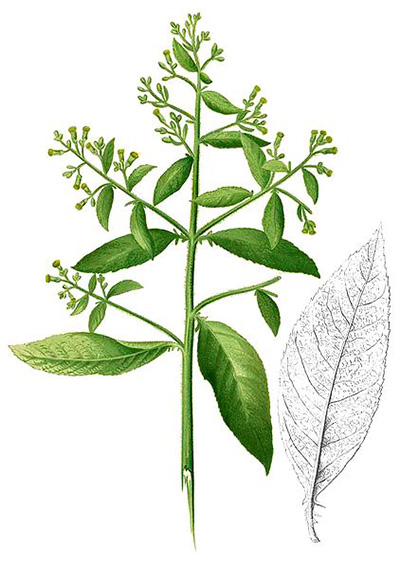 The blumea camphor is a slightly woody, aromatic shrub or small tree that grows in prolific number in the Philippines and other parts of Asia, such as China, Indo-China, Malaysia, and Indonesia. In the Philippines, where blumea camphor (locally called 'sambong') is used for medicinal purposes, it is usually found amidst crabgrass, or on roadsides, growing alongside weeds. Because of this, it is most often confused for being a weed itself, and is weeded out (unknowingly) by ill-informed locals. [1]

Notable for its distinct broad-shaped, serrated-edged leaves and somewhat minty aroma, and tiny, red-tipped buds, blumea camphor is among one of the oldest herbal medicines in the Philippines, with use dating to before the Spanish colonization.

In Philippine folkloric medicine, blumea camphor is usually employed as a demulcent, carminative, and expectorant and is known since ancient times as a remedy for lung congestion. It is employed both fresh or dried, and prepared as a decoction for coughs, colds, flu, and asthma. While long-standing use has made it a curative herb for asthma, modern medical bodies have chosen to relegate it as no more than a folkloric remedy said to relieve but not cure asthma or coughs.

Regardless of this consideration, it is employed, usually in the more primitive or mountainous areas the cure for coughs and asthma, as it encourages expectoration. A simple decoction of the fresh or dried leaves (which easily crumble into flakes or power at this stage) of blumea camphor is given to asthmatics to aid in the expectoration of phlegm and mucous from the lungs. In folkloric medicine, only the mature leaves are employed for its curative purpose, as it is said that it contains more active compounds than the young or senescent leaves. A mild decoction of blumea camphor leaves are also used to help treat other respiratory ailments such as colds, sinusitis, and rhinitis. [2] Another method that offers quick relief is to create an inhalant by throwing in a handful of fresh or dried leaves to a pot of boiling water and inhaling the issuing vapours, preferably with a towel over the head and body of the person to trap the vapours, making for a more efficient inhalation. Care should be taken when employing this method however, as the vapour can scald the eyes. This procedure is most commonly employed in countries like Vietnam and Cambodia. Furthermore, a decoction of blumea camphor leaves can also be used to help ease the symptoms of dysmenorrhea and other female complaints. [2]

When employed fresh, it can sometimes be used as a poultice to help relieve headaches when applied to the forehead and the nape. This is best done when it is mixed with a little amount of coconut oil and placed on a linen strip that can be wrapped around the affected area. The same method can also be used to help relieve symptoms of abscesses, or to relieve swelling brought about by rheumatism and arthritis. [3] In Cambodia, a poultice of heated leaves is usually employed to help postpartum mothers by inducing rapid involution of the uteri lining, as well as to help allay excessive uterine bleeding, or to help induce uterine bleeding if needed (the latter performed by making a hot fomentation placed over the uterus).

Very potent decoctions may also be used as a sitz bath to aid in the relief of rheumy joints, treat sciatica and lumbago, soothe general aches and pains, and may even be used as an antiseptic rinse for boils, carbuncles, and sores. When used alongside its roots, it can be drunk as a tea to help relieve high fevers, as well as treat uterine and urinary cysts. Folkloric belief further suggests this root-and-leaf combination as a treatment for kidney stones (it is said to help in its dissolution) and other renal problems. [4]

It is usually air-dried and, when crumbly, employed as a culinary herb for soups and stews. In countries such as Indonesia, the dried leaves of blumea camphor are often rolled into cigarettes and smoked to act as an expectorant and to relieve congested lungs and treat sinusitis.

Studies have shown that several active compounds found in blumea camphor possess potent anticancer effects, as it actively inhibits the growth of cancer-cells without any cytotoxic side-effects. [5] The essential oils extracted from its leaves (camphor) may even be used as a topical liniment, straight, or otherwise mixed with other essential oils along with a carrier oil.

Names of Blumea Camphor, Past and Present