Native to Asia and north Africa, the broad bean, Vicia faba, earned the title "poor man's meat" for its considerable nutritional value, especially in times of scarcity. [1] The broad bean is considered by historians to have been used in cooking as a "meat extender." [2] Cultures across the world have used not only the bean, but also the pod, as a food souce. The broad bean can be dried for storage, or sprouted once it has matured. In South America, broad beans are roasted and eaten like peanuts; portions of broad beans (called "havas") are sold by vendors on busses, at outdoor food carts, and on the side of the Panamerican Highway, especially in Ecuador, Colombia and Peru.

According to historians, students of Pythagoras claimed they would rather be slaughtered by soldiers than "escape through a field of beans," [1] and Pythagorous himself was said to have refused to enter a beanfield while fleeing the Crotons, which cost him his life. [1]

The Upper-classes of ancient Greece and Rome were said to have thought that consumption of broad beans would reduce the sharpness of their vision [1] The Egyptians regarded the bean plant as unclean, an adversion which has been attributed to the harmful effects of favism (a condition linked to fava bean consumption that effects individuals who lack the enzyme glucose-6-phosphate dehydrogenase (G6PD), causing red blood-cell death; the disease is characterized by symptoms of fatigue, weakness, jaundice, hemoglobinuria (blood in urine), pallor, and potential death from renal failure. Glucose-6-phosphate dehydrogenase deficiency is associated with a lowered risk for malaria (which is common in many areas, including that which ancient Egypt was built on). [1]

In folk medicine, the broad bean has been used as a diuretic, expectorant and tonic. [2]

Studies have shown that broad bean consumption might increase dopamine levels. The broad bean contains a compound called L-dopa which is a building block of dopamine. Researchers at the University of California Santa Cruz have stated that broad beans might be effective part of an alternative treatment for Parkinson's disease. [3]

The Broad Broad Bean, or Vicia faba, not only has been used worldwide as a culinary staple but also has been extensively studied for its medicinal value, which is chiefly attributed to its chemical constituents. Broad bean, for example, had been evaluated for its utility in the symptomatic management of Parkinson's disease. The results of an Israeli study had revealed that broad bean consumption significantly increases the plasma levels of L-DOPA, consequently improving the motor performance of study participants. [4] L-DOPA (levodopa) is the precursor of dopamine, norepinephrine, and epinephrine, and since Parkinson's disease is a degenerative condition caused by the loss of dopamine-neurons in the substantia nigra (a small region in the brainstem), dopamine supplementation through the administration of levodopa becomes a clinical treatment of Parkinson's disease and dopamine-responsive dystonia. [5] Supporting this is another study wherein patients with Parkinson's disease demonstrated significant clinical improvement as regards motor function after ingestion of broad beans, an effect that is very similar to the symptomatic improvement that results after receipt of 125 mg of levodopa plus 12.5 mg of carbidopa. [6]

Although not that well verified by several study findings, reports on anti-Parkinson's disease effects of broad beans lasting longer than that of drugs currently exist, implicating that other substances that may have a beneficial role to play in Parkinson's disease treatment and management may also be found in broad beans, perhaps in substantial amounts. [7]

Dopamine is highly involved in diuresis (i.e., urine production) and natriuresis (i.e., excretion of sodium in the urine) by acting on renal dopaminergic receptors. As mentioned earlier, the availability of dopamine is largely dependent on the availability of L-DOPA, the precursor of dopamine. Because of dopamine's (and hence L-DOPA's) involvement in diuresis and natriuresis, augmenting intrarenal dopamine concentration by enhancing its in situ production through an increase in the availability of its precursor L-DOPA can be of value, especially in hypertension, heart failure, renal failure, and liver cirrhosis in which natriuresis and diuresis are medically beneficial. In this regard, Vered et al. (1997) had investigated the influence of broad bean seedlings on urinary sodium excretion since broad beans are a well-known source of easily absorbable L-DOPA. The results of their study had determined that consumption of broad beans (as used in this study, 40 g of freshly chopped broad beans containing 120-130 mg of L-DOPA) substantially increased plasma L-DOPA levels and, consequently, urinary sodium excretion. [8]

As early as 1913, levodopa had already been known to exist richly in the seedlings, pods, and beans of broad beans, as illustrated by Guggenheim. [4] Depending on diverse factors such as rainfall, soil conditions, and the area the plant is grown, levodopa content in broad beans may vary, although it seems established that the young pod and the immature (green) beans inside the pod hold the greatest amount of levodopa and the mature or dried ones, the least. [7]

Tyramine is a monoamine that functions as a releasing agent of catecholamines such as dopamine, norepinephrine, and epinephrine, [9] making it a regulator of blood pressure. Broad beans are a rich natural source of tyramine; broad bean consumption is to be avoided when one is on monoamine oxidase inhibitor (MAOI) medication since concomitant ingestion of MAOIs and foods high in tyramine content leads to a hazardous increase in blood pressure. [10]

Elizabeth Blackwell's "A Curious Herbal" (1751): 1. The garden bean grows to be three or four foot high; the leaves are a pale green and the flowers white, with two black spots in them. 2. It is sown in gardens, and flowers in May, and the beans are ripe in Iune or Iuly. 3. The water distilled from ye flowers is used by many as a cosmetic; and that from the Pods is accounted good for ye Wind and Gripes in Children. Dioscorides says, ye Meal made into a cataplasm removes ye swelling in Women's Breasts which are occasioned by the Milk; he also recommends it mixt with Roses, Time and ye white of an Egg, as good for purging all watery Rheums from ye eyes; and mixed with Wine as good for ye web and blood-shot of the eyes. The meal given inwardly is esteemed good for a bloody flux. The officinal preparations are the Aqua Florum etc Siliquarum Fabarum.

Other names for Broad Bean, Past or Present 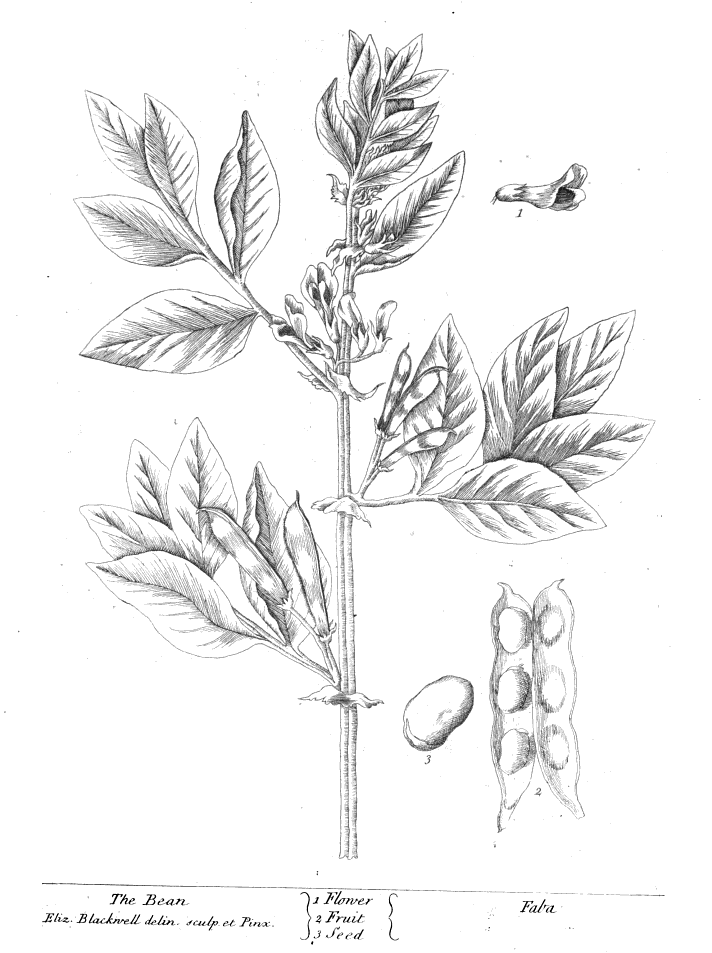