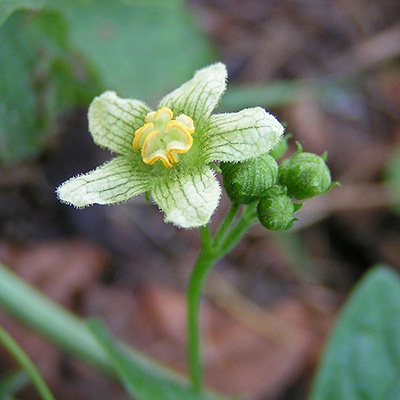 (NOTE - bryony species are generally POISONOUS, some highly so, and may be fatal if ingested. White Bryony's use as a purgative has been discontinued as dangerous.)

Other names for Bryony, Past or Present

Scientific research into the medicinal uses of herbs has determined that Bryony is generally toxic. [1]

Elizabeth Blackwell's "A Curious Herbal" (1751): WHITE BRYONY - 1. The stalks of this Briony climb up to a great height in the hedges; the leaves much resemble those of a vine; the flowers are a whitish green colour. 2. It grows in lanes and hedges, and flowers in May and June. 3. The root is a strong purger of serous watery humours, which it does both upwards and downwards, and is esteemed good for ye dropsy, gout, epilepsy, palsy and hysteric disorders. Doctor Sydenham commends it very much in cases of madness. The Faecula is much of the same nature, but something weaker. The officinal perparations are the Aqua Brioniaie comp. or the Hysteric Water, and the Faecula Brioniae.

William Thomas Fernie - "Herbal Simples" (1895): Our English hedgerows exhibit Bryony of two distinct sorts: the white and the black, which differ much the one from the other as to medicinal properties and which belong to separate orders of plants. The White Bryony is botanically a cucumber being of common growth at our roadsides and often called the white vine it also bears the name of totterberry from its curing a disease of the skin known as tetters. It climbs about with long straggling stalks which attach themselves by spiral tendrils, and which bear rough palmated leaves. Insignificant pale green flowers spring in small clusters from the bottom of these leaves. The round berries are at first green and afterwards brilliantly red. Chemically the plant contains bryonine a medicinal substance which is intensely bitter also malate and phosphate of lime with gum starch and sugar. A tincture is made (H.) from the fresh root collected before the plant flowers which is found to be of superlative use for the relief of chronic rheumatism, especially when aggravated by moving and for subduing active congestions of the serous membranes which line the heart-bag, the ribs, the outer coat of the brain, and which cover the bowels. In the treatment of pleurisy this tincture is invaluable: Four drops should be given in a tablespoonful of cold water every three or four hours. Also for any contused bruising of the skin and especially for a black eye, to promptly bathe the injured part with a decoction of White Bryony root will speedily subdue the swelling and will prevent discoloration far better than the piece of raw beef applied outside as the remedy most approved in the Ring.

In France the White Bryony is deemed so potent and perilous that its root is named the devil's turnip - navet da diable. Our English plant the Bryonia dioica purges as actively as colocynth if too freely administered. The popular herbal drink known as Hop Bitters is said to owe many of its supposed virtues to the bryony root substituted for the mandrake which it is alleged to contain. The true mandrake is a gruesome herb which was held in superstitious awe by the Greeks and the Romans. Its root is forked and bears some resemblance to the legs of a man, for which reason the moneymakers of the past increased the likeness and attributed supernatural powers to the plant. It was said to grow only beneath a murderer's gibbet and when torn from the earth by its root to utter a shriek which none might hear and live. From earliest times in the East a notion prevailed that the mandrake would remove sterility With which purpose in view Rachel said to Leah Give me I pray thee of thy son's mandrakes (Genesis xxx v. 14) In later times the Bryony has come into use instead of the true mandrake and it has continued to form a profitable spurious article with mountebank doctors. In Henry the Eighth's day ridiculous little images made from Bryony roots cut into the figure of a man and with grains of millet inserted into the face as eyes the same being known as pappettes or mammettes were accredited with magical powers and fetched high prices with the simple. Italian ladies have been known to pay as much as thirty golden ducats for one of these artificial mandrakes. The medicinal tincture (H.) of White Bryony Bryonia alba is of special service to persons of dark hair and complexion with firm fibre of flesh and of a bilious cross grained temperament. Also it is of particular use for relieving coughs and colds of a feverish bronchial sort caught by exposure to the east wind. On the contrary, the catarrhal troubles of sensitive females and of young children are better met by Ipecacuanha: "Sitting in a shady grove With my Juliana Lozenges I gave my love Ipecacuanha Full twenty from the lozenge hox The greedy nymph did pick Then sighing sadly said to me My Damon I am sick." The Black Bryony Lady's seal or Oxberry which also grows freely in our hedges is quite a different plant from its nominal congener. It bears the name of Tamus vulgaris and belongs to the natural order of Yams. It has smooth heart shaped leaves and produces scarlet elliptical berries larger than those of the White Bryony. A tincture is made (H.) from the root stock with spirit of wine, which proves a most useful application to unbroken chilblains when made into a lotion with water one part to twenty. The plant is called Black Bryony Bryonia nigra from its dark leaves and black root.

[Bryony] is not given at all internally. 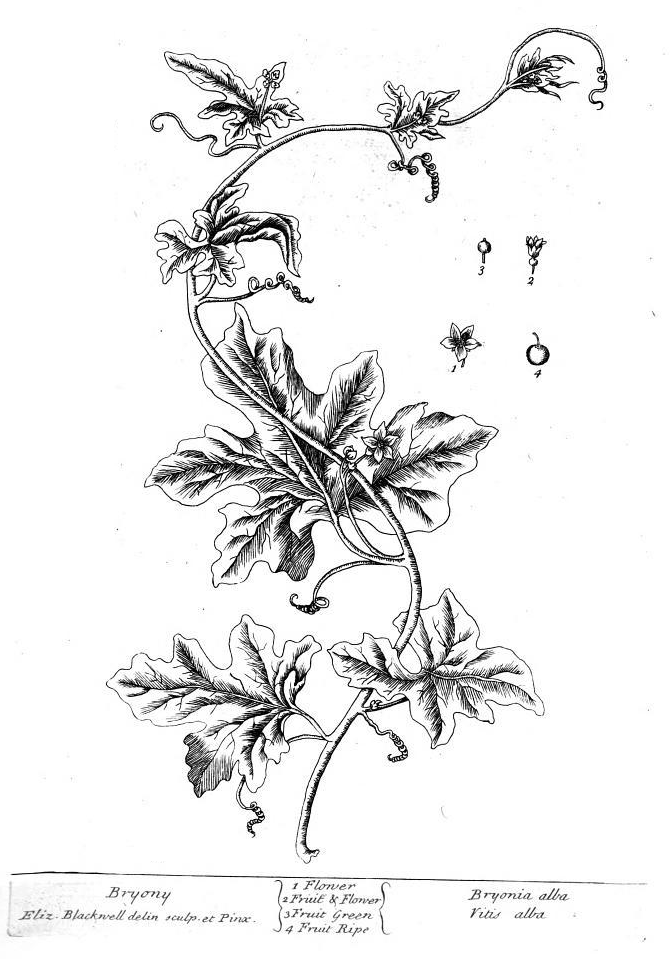