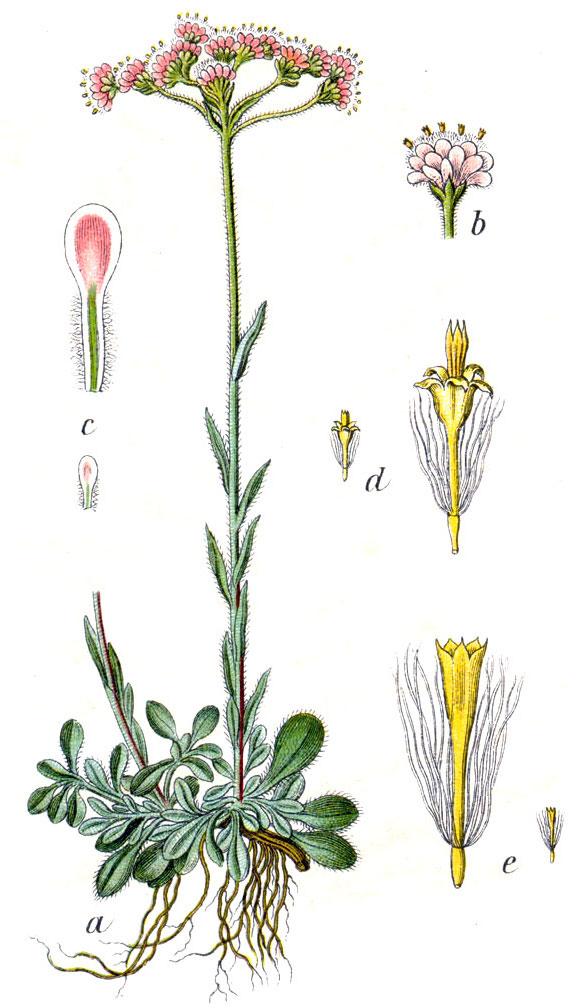 Catsfoot, also known as cudweed, is a uniquely shaped plant from the family Asteraceae (related to calendula and sunflowers), that is known to thrive in several parts of Europe, select parts of Northern America and Alaska, and a small part of Northern to South Eastern Asia. It thrives best in cold, temperate regions, although some species have been found surviving in very moist or cool parts of the tropics albeit only rarely.

Catsfoot grows to between ten to a maximum of twenty centimetres in length, although some species are said to grow much larger (such as the Mediaeval 'herb impious' which is that to grow to about forty centrimetres tall in the wild). It is a perennial which grows all year round, and highly distinctive for the unique inflorescence that it sports, and for its seeming lack of branches or leaves. In actuality, catsfoot possesses basal leaves, no more than four centimetres in length and at least a centimetre in width, the largest found near the apex of the plant, and all the rest arranged spirally upwards along the flowering stem. The inflorescence itself is unique in that it grows in clustered flower-heads, usually six to twelve millimetres in diameter, sporting pale-pink to carnation-hued disc and ray florets. It is also highly distinctive for it's the gaudy show of stamens, which are usually off-white or ivory-white in colour. The plant is generally dioecious, but has a penchant to be able to reproduce asexually. In the wild, the plant often grows in groups that are often all-male or all-female colonies, but mixed colonies are not at all uncommon. It is notable for a unique dimorphism, wherein the males possess a lighter-hued inflorescence, replete with whiter-hued florets compared to that of the female species. [1]

While catsfoot is generally thought to thrive mainly in the European continent, a number of species of catsfoot have also been known to grow in the North Americas. The plant is not unknown, albeit only rarely encountered in the wilds of China, Japan, and Korea. In both Western and Eastern alternative medicine, catsfoot is employed in a number of different ways to treat an assortment of ills. Nowadays, catsfoot is no longer as popular a remedy as it was during the pre-Victorian to mid-Edwardian periods, although some herbalists still employ the plant when available. The plant plays a somewhat significant role in Eastern alternative medicine, although, due to the growing scarcity of the plant in the wild and a lack of cultivation by current means has resulted in the dwindling of its usage. In several parts of North America however, a still-sizeable population of wild catsfoot can be found, and with the recent resurgence of herbal medicine in general practice, one can expect an eventual cultivation of the plant, if solely for ornamental purposes (it is unique in this regard), veering outside of the medicinal. [1]

Catsfoot, if planted in areas where it can thrive and bloom unhindered, make for excellent ornamental plants. This uncannily-shaped plant hides a treasure-trove of medicinal uses which have been largely forgotten since the latter part of the Industrial Revolution, when woodlands and other areas where the plant would have thrived was slowly paved in favour of dirt, and later, concrete or brick roads. Where catsfoot thrives however, the plant can readily be harvested straight off the ground (either by pulling it out, roots and all, or by cutting it near the basal area, which, if conditions are ideal, will allow for later re-growth). The plant has a propensity to keep very well, and when mature can be stored for prolonged periods of time without wholly drying-up, in all respects appearing as though it had only been recently plucked. It is even referred to as 'life everlasting' or 'live-for ever' because of this little feature. [2]

The herb most often wildcrafted, with the whole of its constituents being employed medicinally most ideally while fresh, but often in its dried form. Catsfoot is often infused and drunk as a tisane, and, depending upon the strength of the infusion, can be employed to treat various ailments. When infused mildly, it can be drunk as a cholagogue - a medicinal compound which improves the flow of bile and aids in digestion. Prepared this way, it can be given to individuals who have trouble assimilating the nutrients that would otherwise be readily obtained from food, or otherwise drunk after a meal to promote easier digestion as it stimulates and increases the flow of gastric acid and pancreatic secretions. Mild decoctions of catsfoot may also be given as a remedy for hypotension, although it must only be done under the guidance of an expert herbalist. [3]

Catsfoot also possesses potent astringent and antiseptic properties, and, if infused to moderate strength, can be drunk as a remedy for mumps, indigestion, flatulence, and diarrhoea. Very strong infusions of catsfoot have even been taken internally as a remedy for cysts, gallbladder infections, hepatitis, and dysentery. Mixed with rosemary or otherwise with rock salt, it can even be employed as an oral gargle for the treatment of gingivitis, halitosis, and tonsillitis. [4] A special remedy for a mouthwash that was quite commonplace during the Victorian Era involved a mixture of catsfoot, raspberry leaves, and a tincture of myrrh. When applied topically, its astringent properties make it excellent for wound healing (due in part to its slightly mucilaginous nature) and for the treatment of vaginitis when employed as a douche. [5]

Other uses for catsfoot involve its employment as a liver tonic if taken daily in very minute doses. When applied topically in the form of a poultice or a wrap, it helps to relieve a number of skin allergies. It can provide quick relief for various bronchial complaints when crushed and applied to the chest. Catsfoot may even prove to be edible, and may be integrated in small amounts to fresh salad greens without any detrimental effects.

Aside from the medicinal usage of the plant, it can also be grown as ground cover for other plants in moist or otherwise shady environments, although the care and propagation of it can at first be difficult.

Just as it is only rarely employed for medicinal purposes, so too catsfoot's esoteric uses is also fairly limited. There is very little folklore associated with the plant, save for how the ancients thought it lasted forever even if it were plucked. It was employed as a talismanic article in earlier schools of witchcraft, said to improve one's overall health and increase one's longevity. Its flower-heads, strongly resembling that of cat's claws or paws, was said to imbue the bearer of the plant with a cat's abilities - namely, its agility, its grace, and its nine lives. [6] The plant was often encased in a medicine pouch and kept near one's person for the best effect.

Modern witchcraft and some neo-shamanic practices often use catsfoot to 'gain' the mannerisms or skills of a cat (or any felid species for that matter), or as a tool to help in 'shapeshifting' during astral travel. It is said that the inherent energy imbued within the herb is decidedly feline or attuned to the felid energies, which makes it easier for an astral traveller to assume to the form of such animals during Vision Quests or other such similar activities. [7]

While catsfoot is considered relatively safe for external and internal applications, it is advised that it be done only or short periods of time not exceeding one whole week if employing the herb in full-dosage. Furthermore, individuals who are allergic to ragweed, daisies, marigolds and any other plant of the Asteraceae family is advised to avoid all forms or preparations of catsfoot altogether. As a general safety-note, pregnant and nursing women are also advised to avoid the consumption of any products or preparations that may contain catsfoot. Similarly, children below the age of ten should also not be given any preparation of catsfoot for the sake of general safety.

Catsfoot - Other Names, Past and Present