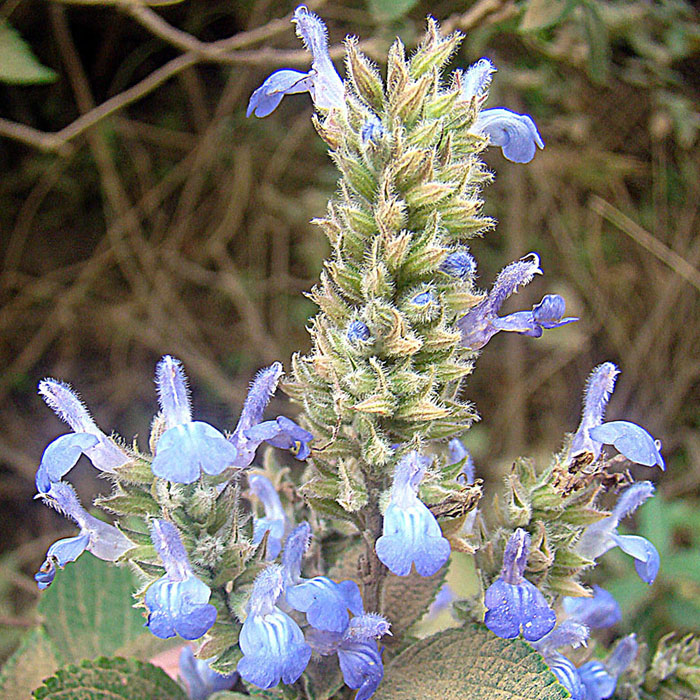 Chia, scientifically named Salvia hispanica, is a biannual plant notably cultivated for its nutritious seeds. The term “chia” is derived from the Spanish word “chian” (meaning “oily”) as a reference to the oilseed that contains a copious amount of omega-3 fatty acids, high-quality protein, dietary fiber, vitamins, minerals, and various polyphenolic antioxidants. [1] Originally from Mexico and northern Guatemala, chia primarily rose to prominence as a functional food with numerous health-promoting and nutritional benefits and, since 1500 BC, has been part of a wide range of folk medicines, encouraging a global increase in its crop production. [1]

Growing up to a meter tall in tropical and subtropical environments, chia possesses leaves arranged opposite to each other. In summer, the plant produces white or purple flowers with small corollas and fused flower parts. The oval seeds, which are the plant material of scientific interest, are black, gray, and black in appearance with white spots. [2]

Chia seeds are an extensively consumed traditional food in Central and South American countries where they have been staple food items for around 5500 years and have been one of the four fundamental dietary elements of Central American civilizations during the pre-Columbian epoch. [1][2][3] They were also traditionally utilized by the Aztecs and Mayas in the preparation of folk medicines, food, and canvases. [1] Whole and ground chia and its oil constituted religious rituals and ancient cosmetics in Aztecs communities during the prehistoric period and offered a superior pre-Columbian diet with immense nutritional and therapeutic potential. [1]

Chia seeds had been shown to maintain healthy levels of serum lipid because of their contents of phenolic acid and omega-3/omega-6 oil. [2] Several of their antioxidant constituents have also been established by scientific evidence to exhibit cardiac, hepatoprotective, anti aging, and anticarcinogenic properties, and the high fiber content of chia makes it an ideal food for persons with conditions related to the digestive system and diabetes mellitus. [1] A 2009 systematic review cited available human and non-human studies that demonstrated the possible effectiveness of chia against allergies, angina, cancer, coronary heart disease, heart attack, hormonal/endocrine disorders, hyperlipidemia, hypertension, stroke, and vasodilation, with some evidence that also puts forward its anticoagulant, performance-enhancing, antioxidant, and antiviral effects. [4] In general, chia finds therapeutic utility in the control of diabetes, dyslipidemia, and hypertension and can serve as an anti-inflammatory, antioxidant, anti-blood clotting, laxative, antidepressant, antianxiety, immunity-enhancing, and analgesic agent. [1]

Chia seeds contain around 25 % to 40 % oil, which in turn consists of omega-3 alpha-linolenic acid (60%) and omega-6 linoleic acid (20%). It is worthy to mention that for good health, the human body requires these essential fatty acids, which cannot be artificially synthesized. [2] Chia seeds also contain 21% protein, which is markedly higher than those of wheat, corn, oats, and rice (14%, 14%, 15.3%, and 8.5%, respectively). Its fiber content reaches 50–60% once the oil has been extracted from the seed. [5] According to Marineli et al. (2014), chia seeds are nutritionally characterized by 25.32 g/100 g of protein, 30.22 g/100 g of oil, and 37.50 g/100 g of total dietary fiber (with 35.07 g/100 g of predominant insoluble fiber) and their major fatty acids, ranked in order of abundance, are as follows: α-linolenic acid, linoleic acid, palmitic acid, oleic acid, and stearic acid. [6] Quantification of chia seeds’ constituents using ultra high performance liquid chromatography (UHPLC) by Martínez-Cruz and Paredes-López (2014) obtained a phenolic phytochemical profile that consisted of 0.92 mg/g rosmarinic acid, 0.74 mg/g protocatechuic ethyl ester, 0.02 mg/g caffeic acid, 0.01 mg/g gallic acid, and 0.006 mg/g daidzin for every chia seed. [7]

Chia seed is considered an important source of α-linolenic acid and eicosapentaenoic acid, two polyunsaturated fatty acids (omega-3 fatty acids) whose regular consumption had been confirmed to help prevent and/or treat cardiovascular diseases such as atherosclerosis and thrombosis. [8][9] In fact, chia seeds are well recognized as a vegetative source with the highest content of α–linolenic fatty acid. [9] They also contain minerals, fibers, and antioxidants that can potentially mitigate cardiovascular risk factors. [8]

Omega-3 fatty acids have long been confirmed to prevent coronary heart disease and to reduce its risks as well as those of other cardiovascular diseases. [10] Daily supplementation of 25 grams/day of milled chia seeds for 7 weeks had been shown to significantly increase the plasma levels of α-linolenic acid and eicosapentaenoic acid in postmenopausal women. Specifically, α-linolenic acid and eicosapentaenoic acid increased by 138 % and 30 % above baseline levels, respectively; for α-linolenic acid alone, a significant increase had already been observed after 1 week of chia supplementation. [11]

A 2015 systematic literature review gathered evidence from human clinical trials regarding the effect of chia consumption on cardiovascular risk. [8] Findings from a 2007 randomized, single-blind, controlled trial demonstrated that conventional therapy supplemented with chia improves primary and emerging cardiovascular risk factors in patients with type 2 diabetes while sustaining good glycemic and lipid control. It was observed that study participants with well-controlled type 2 diabetes who received 37 ± 4 grams of chia daily for 12 weeks in addition to their conventional antidiabetic therapies experienced significant decreases in systolic blood pressure (by 6.3 ± 4 mmHg), high-sensitivity C-reactive protein (by 40 ± 1.6 %), and von Willebrand factor (by 21 ± 0.3 %). Consumption of chia also resulted in a twofold elevation of levels of both plasma alpha-linolenic and eicosapentaenoic acids and a decrease in fibrinogen in relation to chia baseline. [12]

A 2010 randomized, double-blind, controlled study elucidated the cardioprotective benefits of 12-week chia supplementation in type 2 diabetes patients and associated them to the ability of whole chia grains to decrease postprandial glycemia. In this acute study, individuals consuming 7, 15, or 24 grams of chia baked into white bread were characterized by a dose-response reduction in postprandial glycemia and significantly decreased incremental areas under the curve (iAUCs) and time point-specific blood glucose. Appetite ratings collected over 2 hours after chia consumption also decreased, indicating prolonged satiety. [13]

Chia oil has a low peroxide index value (2.56 mEq peroxide/kg) and displays high antioxidant activity, as evaluated through various in vitro methods by Marineli et al. (2014). [6] Employing a DPPH radical assay, Martinez-Cruz and Paredes-Lopez (2014) demonstrated the antioxidant activity of chia seeds and their 68.83% inhibition, a percentage value that is higher than what had been reported initially for chia and other plant foods. [7] Such activity can be entirely attributed to its abundant amount of antioxidants such as chlorogenic acid, caffeic acid, myricetin, quercetin, 3,4-dihydroxyphenyl ethanol-elenolic acid dialdehyde, and kaempferol. [1][6]

Chia diet had been verified by Ayerza Jr. and Coates (2007) to significantly enhance the ratio of omega-6 to omega-3 fatty acids. Blood samples of male Wistar rats fed with whole chia seeds and ground chia seeds were marked to have significantly lower triglyceride content and higher high-density lipoprotein content than those from rats on control diet. In addition, chia considerably augmented the plasma contents of α-linolenic acid, eicosapentaenoic acid, and docosahexaenoic acid. [10]

A dietary pattern comprising soy protein, nopal, chia seed, and oat had been demonstrated by Guevara-Cruz et al. (2012) to decrease serum triglyceride levels and glucose tolerance of patients diagnosed with metabolic syndrome, which is a cluster of medical conditions that elevate one’s cardiovascular risk. In this randomized trial, study participants who had consumed reduced energy diet along with the dietary pattern beverage manifested reduced body weight, body mass index, and waist circumference within 2 months of treatment. They also presented decreases in serum triglycerides, C-reactive protein, and AUC for insulin and glucose intolerance. [15]

Validation by scientific research is still required to establish the safety of chia seeds used as a medicinal food, and so far, there have been limited in vivo and clinical studies addressing this and no allergenicity of chia seeds has been reported in the literature. [2][5] A 2009 systematic review of scientific evidence on chia from 10 databases, 20 journals, and bibliographies indicated the safety of chia consumption by non-allergic individuals. [4] Furthermore, no adverse events have been documented from previous human exposure to chia seeds as novel food in pre-Columbian civilizations, and a comprehensive search in database provides no citations of toxicologically important compounds or metabolites in chia seeds. [5]

[5] "Opinion of the Scientific Panel on Dietetic Products, Nutrition and Allergies on a request from the Commission related to the safety of chia (Salvia hispanica L.) seed and ground whole chia seed as a novel food ingredient intended for use in bread," The EFSA Journal, vol. 278, p. 1–12, 2005. http://www.efsa.europa.eu/sites/default/files/scientific_output/files/main_documents/278.pdf