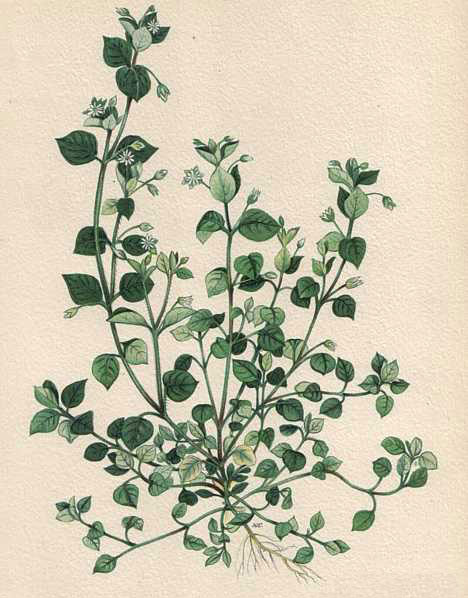 Extremely widespread and established in a wide array of disturbed areas, particularly in nutrient-rich habitats, chickweed, or Stellaria media, is an either annual or short-lived perennial species that produces numerous generations yearly, each one flowering after just 5 weeks of growth, and that has become naturalized in North America and in almost every corner of the globe. [1] A native of Europe, chickweed has extended from the tropical regions of Africa, South America, and Asia to the cold Arctic and sub-Antarctic islands.

Chickweed is regarded as a notorious invasive weed of gardens, cultivated fields, pastures, shady lawns, and agricultural lands and can even be found thriving on walls and in new plantations, sewage works, manure heaps, and coastal strandlines, [2] but these low-growing herbs are valued also as a food for poultry and caged birds and, in small amounts, as a leaf vegetable of stir-fry recipes and salads for human consumption. [3]

Chickweeds belong to Caryophyllaceae, a family whose majority of member species have tremendous applications in traditional medicine in a number of ethnic communities throughout the world. Almost all plants belonging to this family are utilized in Chinese traditional medicine, and several ethnopharmacological studies about this family have indicated anticancer, antibacterial, antifungal, antiviral, antioxidant, and anti-inflammatory properties. [4]

Chickweed is particularly variable in appearance but commonly possesses a very slender taproot and greatly branching leafy decumbent stems that lie along the ground and measure 5–40 cm in length, holding oval, long-stalked, 3- to 20-mm lower leaves and bigger upper leaves that in contrast lack stalks. These leaves are opposite and pointed at the tip, with the older leaves being petiolate. During early spring, the plant produces several small white flowers bearing five cleft petals and stamens with reddish-violet anthers. [1] These flowers are frequented by several small flies and bees. Inside small fruits covered by very hairy calyces, one chickweed plant can generate roughly 2,500 reddish-brown seeds that continue to be viable in the soil for 25–40 years, and the plant can stay green and often in flower throughout winter. [2]

Chickweed has a rich history of being a traditional Chinese medicine for over 200 years, largely for the management of dermatitis and other skin diseases. In the 17th century, herbalist John Gerard advised it for those suffering from mange. Contemporary herbalists recommend it chiefly for skin diseases and for bronchitis, rheumatic pains, arthritis, and dysmenorrhea too. A poultice prepared from chickweed can be applied to cuts, burns, and bruises. [5]

In the 1960s onward, chickweed has been considered one of the twelve most flourishing colonizing species among non cultivated plants and over 50 countries worldwide regard it as a weed, especially in lands where annuals (cereals, oilseeds, pulses, and sugar beet) and perennials (pastures, orchards, plantations) are cultivated. It has been reported in trials in Germany to cause yield losses for winter barley, winter wheat, and spring barley and in the Netherlands for sugar beets. [6]

Ethnobotanical claims of chickweed include being an astringent, carminative, antiasthmatic, demulcent, depurative, diuretic, emmenagogue, expectorant, and galactagogue; many find it beneficial also in kidney complications, rheumatic joints, wounds, and ulcers. [7] Because of its broad range of therapeutic biological activities, chickweed has become commonly used in treating diverse diseases in traditional medicine, such as inflammations of the digestive, renal, respiratory, and reproductive tracts. It possesses as well diuretic, expectorant, antiasthmatic, and antifeedant properties. [8] Overall, the whole plant can be ethno medicinally used as an antirheumatic, anti-inflammatory, astringent, refrigerant, demulcent, emollient, vulnerary, and antipruritic agent. Additionally, chickweed infusion is said to relieve itching and even cure psoriasis, while the entire plant can be applied as a plaster for broken bones and swellings. [4]

Chickweed can be medicinally administered as a tincture at a dose of 2–10 mL, applied three times daily, or as an infusion of the dried herb at a dose of 1–5 g, given three times daily. [9] As a tasty vegetable in salads or cooked greens, chickweed is an exceptional dietary source of essential vitamins A, B complex, and C; minerals such as calcium and iron; and carotenoids, including beta-carotene and gamma-linolenic acid. [9] Externally used ointments or cream base can incorporate chickweed as an ingredient at a ratio of one part of chickweed to five parts of base; these can be traditionally used to soothe itchy inflamed skin and support wound healing. [9]

Chickweed and its pharmacological actions have been modestly investigated under clinical trial conditions, so the evidence for its use relies profoundly on in vitro and animal studies.

As an attempt to develop new antiobesity drugs with minimal side effects through herbal sources, Rani, Vasudeva, and Sharma (2012) investigated the antiobesity potential of lyophilized juice prepared from chickweed in mice through various in vitro and in vivo assay systems. For 6 weeks, the mice were fed with a high-fat diet with or without lyophilized chickweed juice at a dose of 400 mg/kg and 900 mg/kg body weight, and the results pointed out a dose-dependent inhibition of pancreatic amylase and lipase activity in vitro and an increase in plasma triacylglycerol level in mice due to lyophilized chickweed juice intervention. There was an observed suppression of any increase in body weight, retroperitoneal adipose tissue, liver weights, and serum parameters (viz., total cholesterol, total triglyceride, LDL-cholesterol level) at a dose of 900 mg/kg body weight. Upon histopathologic examination of the liver, discernible improvement in fatty degeneration with an absence of pathological lesions was detected in the liver of mice provided orally with 900 mg/kg of chickweed juice. At a dose of 400 mg/kg, little vacuolar degeneration of hepatocytes and some improvement in fatty degeneration were observed. Total phenolic, flavonoid, and saponin contents in lyophilized chickweed juice were identified as 0.26 mg/g, 1.4 mg/g, and 1.19 μg/g, respectively. [8]

Chidrawar et al. (2012) employed a progesterone-induced obesity model in female albino mice to screen the antiobesity attribute of chickweed and its methanolic and alcoholic extracts. Chickweed methanolic extract had been shown to have prevented the increase in body weight, adipose tissue weight and size, and upturned obesity and associated complications, which, as the findings had demonstrated, can be explained by the anorexic property of chickweed methanolic extract that is mediated by saponin and flavonoid and partly by its β-sitosterol content. As confirmed by thin-layer chromatography of the extract, β--sitosterol physically competes with dietary fat in the gastrointestinal tract and efficiently reduces fat absorption due to this plant sterol’s structural similarity with dietary fat. Overall, the study suggested that the methanolic extract of chickweed is helpful in suppressing obesity induced by progesterone. [10]

Among the twenty-seven extracts derived from noncultivated and weedy vegetables customarily consumed by ethnic Albanians in southern Italy, strong in vitro inhibition of xanthine oxidase was found for extracts from noncultivated chicory, gum succory, and chickweed, with an antioxidant activity higher than that of a reference extract from Ledum groenlandicum. [12]

Sm-AMP-D1 and Sm-AMP-D2 are novel immensely homologous defensins isolated by Slavokhotova et al. (2011) from the seeds of common chickweed. Both display sequence homology to defensins of the Brassicaceae plants and strongly inhibit phytopathogenic fungi and oomycetes in the micromolar range (IC50 ≤ 1 μM). [13]

Chickweed has been traditionally used as an antiviral agent, and Ma et al. (2012) provided the first scientific evidence on the antiviral activity of chickweed against hepatitis B virus (HBV), its underlying mechanism of antiviral activity, and the existence of great quantities of polyphenol and macromolecular compounds that may contribute to the HPV-inhibitory activity of chickweed. In this study, macroporous resin and ultrafiltration technology was conducted to prepare all fresh chickweed juice samples. The results indicated a suppressed secretion of HBsAg and HBeAg in the human HBV-transfected liver cell line HepG2.2.15 as a result of treatment of 30 μg/mL SM-3 with inhibition rates of 27.92% and 25.35%, respectively, after 6 days of intervention. Secretion of hepatitis B virus antigens from HepG2.2.15 cells was inhibited by SM-3, attaining 9.83%, 19.79%, 24.05%, and 27.92% inhibition for HBsAg and 6.51%, 18.55%, 21.83%, and 25.35% inhibition for HBeAg at 1, 3, 10, and 30 μg/mL. There was also an observed dose-dependent decrease in the level of extracellular HBV DNA. Flavonoid C-glycosides, polysaccharides, and proteins were quantified from SM-3, which were shown to exhibit antiviral activities. Conclusively, the study supports the development of chickweed as a potential anti-HBV drug candidate owing to its anti-HBV effects. [5]

A 2014 study published in the March issue of Bulletin of Experimental Biology and Medicine illustrated the hepatoprotective activity of a water-soluble polysaccharide fraction isolated from the terrestrial parts of chickweed. In this study, treatment of the water-soluble polysaccharide fraction of chickweed at a dose of 100 mg/kg resulted in a reduction of serum activities of transaminases (ALT and AST), alkaline phosphatase, bilirubin, and thymol test values in rats with CCl4 hepatitis. The rat livers also manifested a decrease in inflammatory infiltration density of the organ parenchyma, total necrotic hepatocyte count, and fatty and protein degeneration. [15]

In general, chickweeds are safe and no significant alarming interactions with other drugs are known. However, the fact remains that inadequate reliable research data exist regarding the safety of chickweed used externally or internally. [9] Chickweed leaves contain saponins, which are toxic to a certain degree, although fortunately, these compounds are very scantily absorbed by the body and so tend to pass through the gastrointestinal tract without causing harm. Saponins are also broken down by thorough cooking. [16]

Note that if you are intending to wild harvest chickweed, be sure that it has not been sprayed with herbicide. Chickweed is one of those plants that is commonly sprayed by farmers as it is regarded as a nuisance weed to their crops.