Cordyceps is a genus of over 680 species of fungi, most of which are found in Asia - particularly Nepal, China, Japan, Korea and Thailand. [1][2] Of these, two species in particular have gained much attention - Cordyceps sinensis and Cordyceps militaris, which have long been considered medicinal by Traditional Chinese and Traditional Tibetan medicine. Cordyceps has been highly esteemed in the Orient as a tonic and believed to promote longevity, physical power, mental clarity and immune strength. [3]

All cordyceps species are said to be parasitoids - meaning that they are parasites that ultimately bring about the demise of the host that they are attached to. Cordyceps sinensis grows in/on a caterpillar - with the mycelium (vegetative part) growing inside the caterpillar, and the fruiting body growing from the head of the caterpillar. However, there is said to be evidence that Cordyceps sinensis may in fact have a symbiotic relationship with its host, rather than a pathogenic one - only producing a fruiting body, which kills the host, under conditions of stress. The relationships between cordyceps species and their hosts are complex, and many mysteries still remain to be solved. [2]

Cordyceps militaris has been found to contain proteins, vitamins A, B1, B3, B6, B12, as well as zinc, copper, selenium, cordycepin, cordycepic acid, polysaccharides and superoxide dismurse. [4]

Cordyceps sinensis has been revered for centuries in Traditional Chinese Medicine, and is considered to bring increased energy and vitality. However it has been little known to the west until the late 20th century. A single event brought Cordyceps to the attention of the world, and to fame - the Beijing Games of 1993, where several world records were broken by the Chinese women's athletic team. The team was under suspicion of drug use but it was stated by their coach that the "secret ingredient" in their success was the use of Cordyceps sinensis. Some remain suspicious however that drug use may have been involved, as the results were not replicated at other events henceforth - however traces of drugs were never found. The dominant ingredient in the coach's "secret formula" was said to be Cordyceps. It also contained Tortoise Shell, but the other ingredients remained a mystery. [3]

Cordyceps sinensis grows from the head of only one type of Lepidoptera caterpillar, which lives at high altitude on the Qinghai-Tibetan plateau. For this reason, together with elevated demand, it has been scarce and natural supply has diminished. It has been considered the most expensive raw material used in Oriental medicine and the world's most expensive "medicinal mushroom". Prices in the USA for one kilogram of wild-collected C. sinensis were an astounding $75,000 in 2008, however most of the cordyceps now traded has been artificially cultivated. [2] The best wild cordyceps is said to be that which came from Tibet, and also that which is the largest - which may be referred to as "King Cordyceps".

It is said that the quality of artificially-created Cordyceps products can vary greatly - and that some products sold have been found to be either adulterated or counterfeit. However some "natural" Cordyceps has also been adulterated - and has even been found to contain metal wire, including lead, which had been inserted into it in order to increase the weight of the product! (Cordyceps is usually sold by weight). This has led to a development of more advanced methods of assaying the quality of products destined for sale, including microscopy. C. sinensis has even been cultivated in an artificial environment that mimics the low-oxygen environment of the high plateau of the Himalayas. [2] A further advantage of culture-grown cordyceps is that it contains no caterpillar, and is thus suitable for vegetarians or those to whom the idea of eating caterpillar does not appeal! 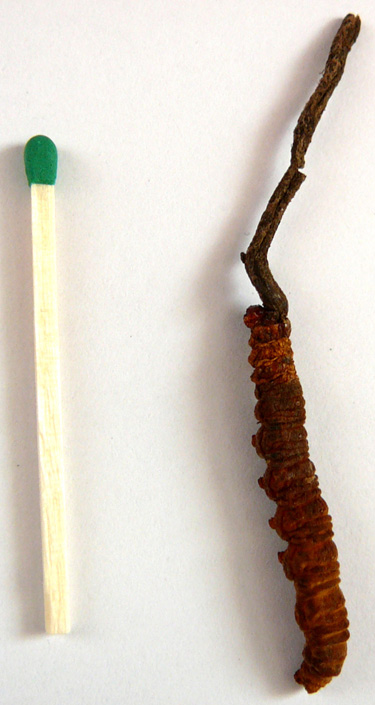 Cordyceps sinensis has been long believed by TCM to be a rejuvenator and bringer of increased vitality to the fatigued. It has also been used in a wide range of other therapies - including for immune disorders, cancer, lung conditions and liver diseases. It has also been believed to be a cure for impotence, and has been used as an aphrodisiac. However, its main used has been by athletes and the elderly. [2]

Cordyceps has been the subject of much scientific study, chiefly investigating its potential for enhanced athletic performance, cognitive function or sexuality.

A 1997 study at the Norman Bethune University of Medical Sciences, Changchun, found that Cordyceps militaris increased the testosterone and the weight of the sexual organs of rats, exhibiting a "male-hormone-like" effect. It also had an inhibitory effect on the growth of cancer cells in mice. [5]

A 1998 review of in vitro, in vivo and clinical blinded or open-label trials of over 2000 patients, found Cordyceps sinensis to have sexual function-restorative activities, as well as other positive effects. [6]

A 2013 study at the Korean Technical Research Institute found that Cordyceps militaris had a hepatoprotectant effect against alcohol-induced hepatotoxicity. [7]

A 2013 study at the South China Normal University found that Cordycepin (3'-deoxyadenosine), the major bioactive component of Cordyceps militaris, significantly improved Y-maze learning performance both in healthy and ischemic mice. The study indicated potential for the use of Cordyceps to improve cognitive function in patients with ischemic stroke. [9]

A 2009 study at the Department of Molecular and Cellular Pharmacology, School of Pharmaceutical Sciences, Peking University, Beijing, China found that Cordyceps sinensis extract "improved the brain function and antioxidative enzyme activity in mice with d-galactose-induced senescence and promoted sexual function in castrated rats." [10]