Names of Fenugreek, Past and Present

Fenugreek is an ancient spice that has been used since the time of the Bronze Age, initially harvested from wild annual varietals of fenugreek - the ancestor of the common fenugreek plant which is still much in use as a culinary and medicinal spice to this day, especially in Asian and Mediterranean areas. Today, fenugreek is now cultivated widely, especially in Arabia, India and Nepal both for its broad, aromatic leaves that are employed fresh or dried as a culinary herb (as a condiment, additive, and vegetable in all), and for its very pungent seeds that feature most commonly in Indian and Arabian cooking and herbal medicine. 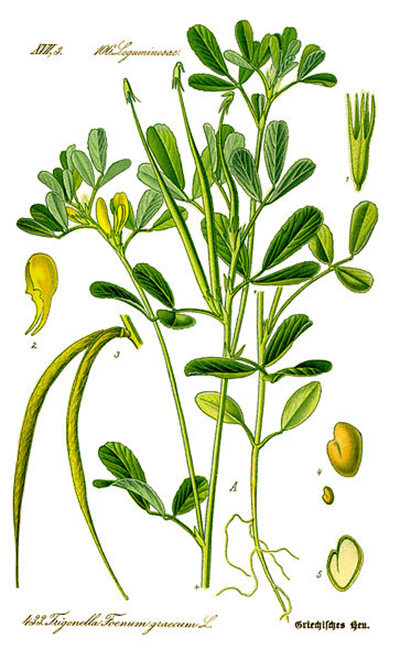 In ancient times, it was recorded by Cato the Elder in his treatise on agriculture, De Agri Cultura that fenugreek was among the many choice plants that make for great cattle fodder. In India and several places in Asia, fenugreek was employed chiefly as a vegetable and culinary spice (employing both its leaves and its seeds). The leaves of the fenugreek plant, while young, is usually eaten as a vegetable, while mature leaves are typically used fresh or dried as an herb to add to stews, soups, and roasts, as it imparts a distinctively full-bodied flavour to the dish. Employed by itself, although more used in accompaniment with other herbs and spices, the dried leaves of fenugreek, called methi in Hindi is also employed as a tea for medicinal and cosmetic reasons. When ground to a fine powder, it is also usually added to henna powder and used to beautify the hair - this is sometimes accompanied by the powdered form of its golden-brown to dun-hued seeds, resulting in a very pungent fine powder that is said to allay hair fall and the untimely graying of hair, while adding shine, body, and luster. [1] The powdered leaves and / or seeds are also used in flavouring pickles and preserves.

Some cultures employ the powdered or mashed seeds of the fenugreek plant as an ancient remedy for diabetes, although it may be credited as more of a preventative, or, in the case of the presently diabetic, more of a 'management' remedy, rather than a cure. On of the many time-tested uses for fenugreek is as a galactagogue - a natural substance that helps to increase the volume and flow of breast milk in lactating mothers - a use that has been employed by a number of cultures for centuries. [2] This remedy may be created by simply grinding fenugreek seeds into a fine powder and consuming a minute amount (around 1/4th teaspoon or less) a day with water. Due to its recent popularity as a galactagogue, fenugreek powder readily available in pill form can even be purchased from health food stores, or online. Fenugreek may even be employed to treat fevers, while boiled, cooled and mashed seeds can be applied to burns and scalds, as the jelly-like substance within the seeds helps to hasten healing and relieve pain. [2]

A strong decoction of fenugreek seeds and leaves may also be used as an aphrodisiac, as it is also believed to increase libido. This benefit is usually marketed towards males, but its aphrodisiacal properties prove effective for both males and females alike. Veering once more towards the cosmetic, aside from its ability to strengthen and beautify hair, fenugreek is also believe to promote breast enlargement as it mimics estrogen (the seeds contain a compound called diosgenin, which is commonly employed to synthesize artificial estrogen) and may be drunk as a tisane or taken as a capsule for just that purpose. Folkloric belief states that a strong decoction of the seeds and leaves may even be poured onto the breasts daily to increase their size, softness, and resilience. [3]

Drinking or consuming fenugreek in controlled dosages may even help to increase cognitive function and alleviate stress, as the leaves and more so the seeds contain substantial amounts of folate as well as antioxidants that help to boost memory, mental alertness, and of course alleviate stress.

Fenugreek is even employed in magickal customs, especially in Judaic custom where it is among a choice ingredient in making a special bread dip or sauce called hilbeh, which, while consumed daily, is also allotted a ceremonial significance, especially during the Rosh Hashana or Jewish New Year. Fenugreek leaves are also burnt as incense in many Hindu temples, especially as offerings to the god Ganesha or Brahma, while its seeds may be ground and employed for the same purpose in Western ceremonial magick for boosting other spells.

When consumed in moderation, fenugreek is generally a safe herb with very little side-effects, although it must be noted that pregnant women must avoid fenugreek leaves (and even its seeds with caution), as it possessed minute, but nevertheless risky abortifacient properties and may cause undue contractions of the uterus.