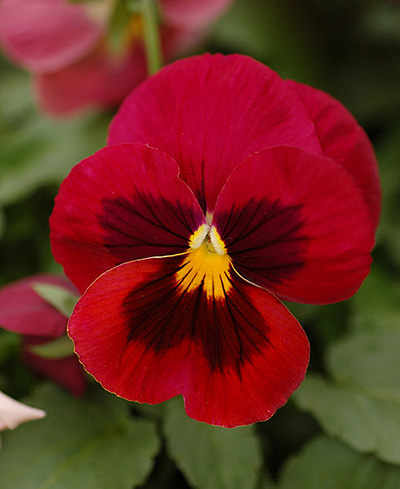 The results of scientific studies have indicated that Heart's Ease might be helpful in treating menopausal symptoms. [2] Heart's Ease has also been described as a laxative, diuretic, anti-inflammatory, antimicrobial, antispasmodic, tonic, demulcent and emetic. However, these additional claims have not been validated according to modern science. [1] The herb is considered to be safe for adults, but no safe or effective dose has been determined for children.[1] While complimentary techniques are often considered to be beneficial, any change in medication or heath-care regimen should be discussed with the medical practitioner of the person in question (as is the case with with all herbal or alternative remedies).

Elizabeth Blackwell's "A Curious Herbal" (1751): 1. It grows a foot high, the leaves are a dark green, the flowers spotted with a liht purple, a deep purple and yellow. 2. It grows wild in the borders of the fields, and is also planted in gardens, flowering great part of the summer. 3. The leaves are esteemed mucilaginus and vulnerary, good to take off the gripes in children, and prevent the fits arising from them.

William Thomas Fernie - "Herbal Simples" (1895): The Wild Violet or Pansy (Viola tricolor) is found commonly throughout Great Britain on banks and in hilly pastures, from whence it has come to be cultivated in our gardens.
Viola, a corruption of "Ion," is a name extended by old writers to several other different plants. But the true indigenous representative of the Violet tribe is our Wild Pansy, or Paunce, or Pance, or Heart's ease; called also "Love in idleness," and "John of my Pink."
"A little Western flower,
Before milk-white, now purple with love's wound,
And maidens call it - Love in idleness.'"
The term "heart's ease" has signified a cordial which is comforting to the heart. But the fact is that Pansies, "pretty little Puritans," produce anything but heart's ease if eaten, and their roots provoke sickness so speedily that these are sometimes employed as an emetic.
Dr. Johnson derived the word Pansy from Panacea, as curing all diseases; but this was a mistake. The true derivation is from the French pensee, "thoughts," as Shakespeare knew, when making Ophelia say: "There is pansies-that's for thoughts."
From its three colours it has been called the herb Trinity. A medicinal tincture is made (H.) from the Viola tricolor with spirit of wine, using the entire plant. Hahnemann found that the Pansy violet, when taken by provers, served to induce cutaneous eruptions, or to aggravate them, and he reasoned out the curative action of the plant in small diluted doses for the cure of these symptoms, when occurring as disease.
"For milk crust and scald head," says Dr. Hughes (Brighton)-the plague of children, "I have rarely needed any other medicine than this Viola tricolor; and I have more than once given it in recent impetigo (pustular eczema) for adults, with very satisfactory effects." For the first of these maladies the tincture should be given in doses of from three to six drops, to a child of from two to six or eight years, three times a. day in water.
Again, "for curing scalled (from scall, a shell) head in children, a small handful of the fresh plant, or half a drachm of the dried herb, boiled for two hours in milk, is to be taken each night and morning; also a bread poultice made with this decoction should be applied to the affected part."
"During the first eight days the eruption increases, and the urine, when the medicine succeeds, has a nauseous odour like that of the cat, which presently passes off; then, as the use of the plant is continued, the scabs disappear, and the skin recovers its natural clean condition."
The root of the Viola tricolor has similar properties to that of Ipecacuanha. It loves a mixture of chalk in the soil where it grows.
The Pansy contains an active chemical principle, "violin," resin, mucilage, sugar, and the other ordinary constituents of plants. When bruised the plant, and especially its root, smells like peach kernels, or prussic acid. It acts as a slight laxative.
The Germans style the Pansy Stief-mutter, because figuratively the mother-in-law appears in the flower predominant in purple velvet, and her own two daughters gay in purple and yellow, whilst the two poor little Cinderellas, more soberly and scantily attired, are squeezed in between. Again, another fable says, with respect to the five petals and the five sepals of the Pansy, two of which petals are plain in colour, whilst each has a single sepal, the three other petals being gay of hue, whilst one of these (the largest of all) has two sepals; that the Pansy represents a family of husband, wife, and four daughters, two of the latter being step-children of the wife.
The plain petals are the step-children, with only one chair; the two small gay petals are the daughters, with a chair each, and the large gay petal is the wife, with two chairs. To find the father, one must strip away the petals until the stamens and pistils are bare. These then bear a fanciful resemblance to an old man with a flannel wrap about his neck, having his shoulders upraised, and his feet in a bath tub. The French also call the Pansy "The Step-mother."
The chemical principle, "violin," contained in the flowering Wild Pansy resembles emetin in action. If the dried plant is given medicinally, from ten to sixty grains may be taken as a dose, in infusion.

Other names for Heart's Ease, Past or Present 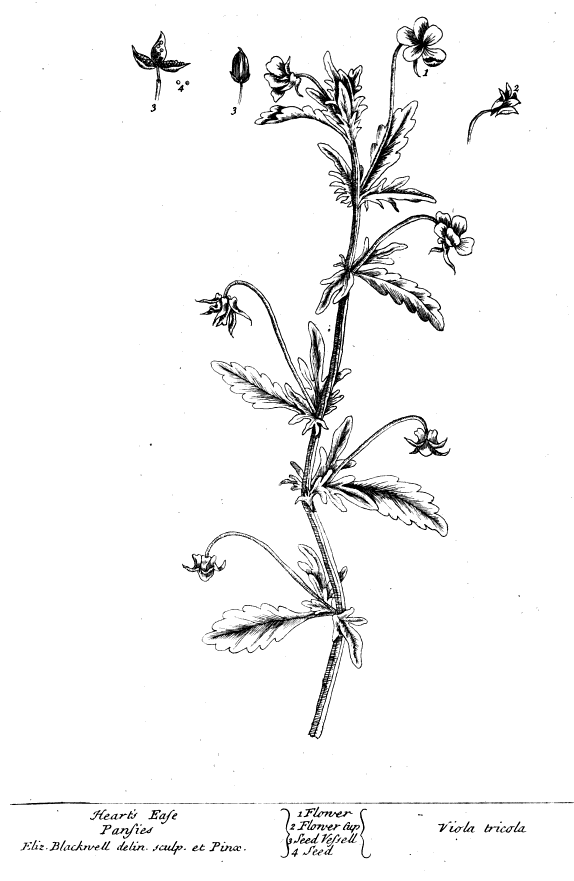