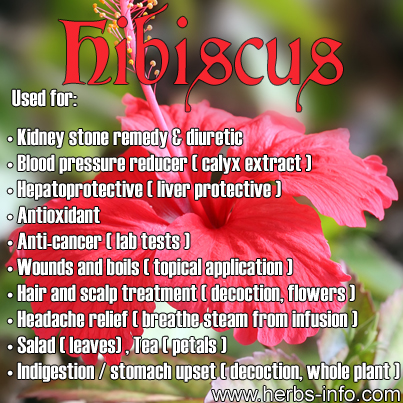 The hibiscus plant is an erect, many-branched shrub that grows up to four metres tall, and is replete with glossy green leaves that are distinctive for their somewhat 'toothed' appearance. It is typically grown as an ornamental plant in gardens due to its very beautiful and gaudy flowers that come in colours ranging from deep reds to the creamiest of whites, or any muted admixture of such colours in the fullness of the spectrum and feature obovate shapes and rounded tips. [1]

The hibiscus also possesses fruits, generally capsule shaped, although these are only found in wild species that grow in side streets or untended lots. Nearly all varieties of hibiscus are cultivated, chiefly as an ornamental plant, as well as an edible commodity and medicinal herb. When employed therapeutically, the flowers, leaves, and roots of the hibiscus are used, each with their own medicinal function, while the flowers by themselves are typically prepared as a sweet dessert or as a type of tisane. [1]

While the hibiscus is commonly thought of to be an ornamental plant chiefly grown for its gaudy flowers, its second most popular use is as a primary source for the ingredients that constitute flor de Jamaica - a type of floral tea that counts the calyx and petals of the plant as among its chief ingredients.

Hibiscus as diuretic: The calyx and petals of the hibiscus flower is commonly dried and used to make a richly hued tea drunk as a mild diuretic. Typically prepared using earthenware pots or enameled crock pots (as it is believed that metal pots will leach away whatever nutrients and therapeutic properties the plant matter possesses), it is usually decocted in either its fresh or dried form, the ensuing liquor typically taking on a rich burgundy or otherwise slightly golden hue depending on the colour of the petals and calyx - although typically, commercially sold hibiscus petals used for tea are usually of the reddish variety, while wildcrafted ones come in a wide range of colours and, in effect, liquor hues.

When dried and mixed with a sweetening agent such as honey, jaggery, or molasses, it may also be consumed as a foodstuff, typically by coating the dried petals in a sweetening mixture, shaping them into circular pellets, and allowing it to harden (a custom common in India and other parts of Asia). The fresh leaves may also be integrated into salads or incorporated into aperitifs (usually when employed as a culinary additive in the Western context), while it may be used in both raw and cooked form (and, in some cases, even in fermented form) in some Eastern cuisines. [2]

Aside from its use as a beverage and as a foodstuff, hibiscus may also be employed to help treat wounds, boils, mumps and glandular swellings by creating a macerated paste of the petals and applying them regularly to the affected area. [2] For further efficiency, the leaves may also be pounded into a paste alongside the flowers.

The liquor that is obtained from the decoction of its flowers is even said to help treat hypertension as well as fevers and indigestion, while a decoction of all the constituent plant parts (leaves, roots, and flowers) yields a potent liquor that is useful as both an antidote for mild food poisoning, as well as a great emollient for the skin. [2] A strong decoction of the roots alone yields a powerful tisane that is useful for the treatment of coughs and flu, and may also help to calm the nerves, while milder decoctions can used as a natural remedy for sore eyes when applied as sterile drops in lieu of synthetic ones. [3]

Hibiscus for hair and scalp: A potent decoction of the flowers may be used as a hair rinse to promote shine, luster, and hair growth, while a slow maceration of dried leaves in coconut oil, or a quicker infusion of its leaves in heated oil may be used as a massage oil to help treat and allay common scalp problems such as graying hairs, alopecia, and fungal scalp infections while providing a cooling and soothing sensation to the scalp that is also said to relieve discomforts brought about by migraines or headaches. [4]

A faster method to relieve headaches and even congestion of the lungs is to create an inhalant by throwing a handful of dried hibiscus flower petals in a pot of boiling water, or by burning it as an incense - the latter also promoting peacefulness and calm when whiffed.

Poultices made from its flowers or leaves, or the liquor which results from a decoction of the flowers or all of its plant parts is also believed to promote faster wound healing, while choice applications of both its decoctions yields many useful medicinal properties, among them being its cardioprotective, anti-hypertensive, antioxidant, and anticancer properties. [5]

It should nevertheless be noted that consumption of hibiscus tea (from flowers, or from all its constituent parts) should be moderated, with consumption particularly discouraged in pregnant women, as it can be an abortifacient when taken in large doses.

Hibiscus as antihypertensive (blood pressure reducer): A randomized, double-blind, lisinopril-controlled clinical trial was performed by Herrera-Arellano et al. (2007) to assess the therapeutic efficacy, tolerability, and safety of a certain herbal medicinal product produced from the dried extract of Hibiscus sabdariffa calyxes and to compare these with those of lisinopril on hypertensive patients. Herrera-Arellano et al. (2007) treated 25–61-year-old patients with hypertension stage I or II with the herbal medicinal product prepared from the dried extract of H. sabdariffa calyxes for 4 weeks. Treatment led to a reduction in blood pressure (an absolute reduction of 17.14/11.97 mmHg) with a therapeutic effectiveness of 65.12% and a wide margin of tolerability and safety of 100%. [6]

McKay, Chen, Saltzman, and Blumberg (2010) recently had reported that the regular consumption of tea produced from Hibiscus sabdariffa markedly lowers the blood pressure of prehypertensive and mildly hypertensive adults, as demonstrated by the results of their randomized, double-blind, placebo-controlled clinical trial wherein the hibiscus tea decreased the systolic blood pressure of 30–70-year-old study participants compared with placebo (-7.2 +/- 11.4 vs. -1.3 +/- 10.0 mmHg; p = 0.030). In this study, the participants who initially had higher systolic blood pressure at baseline demonstrated better response to hibiscus treatment. [7]

Mozaffari-Khosravi, Jalali-Khanabadi, Afkhami-Ardekani, Fatehi, and Noori-Shadkam (2009) provided similar findings as those of the previously cited studies. Their double-blind, randomized, controlled trial had determined that drinking Hibiscus sabdariffa sour tea positively influences the blood pressure of type 2 diabetic patients with mild hypertension, the results indicating a mean systolic blood pressure decrease from 134.4 +/- 11.8 mmHg at the beginning of the study to 112.7 +/- 5.7 mmHg after 1 month (p < 0.001) and a mean pulse pressure decrease from 52.2 +/- 12.2 to 34.5 +/- 9.3 mmHg (p < 0.001) during the study. [8]

Hibiscus as kidney stone preventative: Hibiscus sabdariffa had also been shown to decrease renal calcium crystal deposition, significantly decreasing serum oxalate and glycolate in the kidneys of Hibiscus sabdariffa–treated Wistar rats and increasing their excretion into the urine, as illustrated in one Japanese study. [9] This antilithic effect of Hibiscus is medically important and valuable, as the retention of urinary calcium oxalate crystals and other crystal agglomerates in the kidneys induces an inflammatory response that increases the number of interstitial cells and expands the extracellular matrix. [10] In addition, Hibiscus sabdariffa improves one's capacity to excrete uric acid in the urine, [11] consequently decreasing uric acid concentration in the blood plasma and thus helping patients suffering from gout and hyperuricemia. [12]

Hibiscus as antioxidant: Hirunpanich et al. (2005) had showed that the dried calyx of Hibiscus sabdariffa exerts a strong antioxidant effect in Cu(2+)-mediated oxidation of rat low-density lipoprotein (p < 0.05) in vitro, the inhibitory activity on oxidation being dose dependent at a concentration of 0.1–5 mg/mL. [13] Furthermore, an earlier study had determined that the dried flower extracts of Hibiscus sabdariffa in chloroform-soluble fraction and ethyl acetate–soluble fraction possess a hepatoprotective property against tert-butyl hydroperoxide (t-BHP)–induced cytotoxicity and genotoxicity. [14]

In a similar vein, Lee et al. (2012) had provided data that the polyphenol extract of Hibiscus sabdariffa helps to protect the liver from the assault or damage associated with acetaminophen, diminishing the mitochondrial dysfunction in vivo and in vitro and decreasing oxidative stress. In their study, using H. sabdariffa extract as pretreatment increased the glutathione level, decreased the lipid peroxidation level, and increased the catalase activity in the liver. [15]

Ramirez-Rodrigues, Plaza, Azeredo, Balaban, and Marshall (2011) explored the physicochemical and phytochemical properties of Hibiscus cold (25°C) and hot (90°C) water extracts and identified hibiscus acid and two of its derivatives as well as a few polyphenolic compounds, including hydroxybenzoic acids, caffeoylquinic acids, flavonols, and anthocyanins (delphynidin-3-sambubioside and cyanidin-3-sambubioside), in the Hibiscus extracts. [16]

Hibiscus is not without its magickal uses, as it is a flower is a sacred symbol in many countries, especially in India, where it is the flower of the dreaded goddess Kali. The flowers are used as offerings to both the goddess Kali, and the elephant-headed god Ganesha. The flowers of the hibiscus may also be burnt as a type of incense, and is said to invite love, promote fidelity, and encourage passionate love-making. In some tribal culture, especially that of Haiti, Tahiti, and Hawaii, hibiscus blossoms is given symbolic meanings in relation to feminine beauty, eligibility, and chastity.

Names of Hibiscus, Past and Present

[5] The effects of sour tea (Hibiscus sabdariffa) on hypertension in patients with type II diabetes http://www.nature.com/jhh/journal/v23/n1/full/jhh2008100a.html