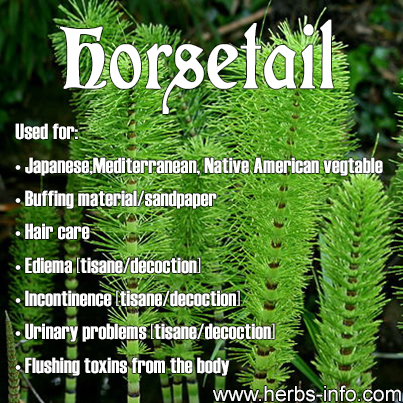 Names of Horsetail, Past and Present

Horsetail is a literal living fossil, known to be the only living genus in the singular plant family Equisetaceae, a unique group of plants which dates to as far back as the Paleozoic period. These unique plants reproduce via spores (much like some fungi) rather than seeds, a feature which is now considerably unique, but was rather quite commonplace during the Paleozoic era. Horsetails were originally a very large species of plants, with some horsetail trees reaching as much as thirty metres tall.

Nowadays, horsetail is typically smaller by far than the prehistoric ones, and is discernable for its somewhat spiky leaves resembling sprigs of rosemary, arranged in such as way as to imitate a horse's tail (hence the name). Some varieties of horsetail may even have branches - albeit sparse ones. All horsetails grow from a very hardy burr beneath the ground that is nearly impossible to dig out, which makes getting rid of invasive species very difficult. In most places in the U. S. horsetail is considered a nuisance weed, although it is also collected and employed for its medicinal properties. The leaves of the horsetail plant are commonly employed for medicinal purposes, and sometimes even as food (although some species can be toxic, while nearly all species of horsetail can be dangerous to grazing animals especially if consumed in high concentrations). [1]

Prior to the natural-medicine market boom of today, the oldest use of horsetail was as a type of primitive natural sandpaper used to smooth wooden items. Because horsetail is replete with silica and possesses a somewhat rough feel, it was employed by ancient cultures in both Asia and Europe as an early buffing material. Today, it is still used as such, being, as many craftsmen would attest, far more superior to any modern synthetic types of sandpaper when it comes to the fineness and sheen that it imparts on wood. Some species of horsetail were also consumed as a type of vegetable despite the fact that some varieties are toxic to grazing animals and no doubt to humans as well. The custom of consuming horsetail as food is still existent today, albeit only in limited areas such as some parts of Japan, a few areas in the Mediterranean, and in some Native American tribes where it is consumed either raw (as is the case of the latter cultures) or prepared form (as is the case for the two former). [2] Horsetail was also brewed during olden times as a hair rinse - a practice that is still commonly done today by natural hair care buffs.

Despite being a medicinal herb employed since the time of the Ancient Greeks, the medicinal uses of horsetail did not become 'popular' until the latter part of the 1400s, when its use revolved around its being made into tisanes or decoctions and employed for treating edema, incontinence and an assortment of urinary problems arising from illnesses in the bladder or kidneys (practices taken no doubt from earlier cultures that employed the plant as medicine). Because horsetail is a potent diuretic, it possesses the capacity to flush out toxins from the body, although over consumption can cause unwanted side effects such as vomiting and diarrhea. [3]

Today, horsetail is commonly employed as a hair-care herb, usually brewed or decocted as a hair-rinse, or otherwise dried, powdered, and encapsulated as a food supplement and sold as a 'hair growth encouraging pill'. Horsetail is also a common additive in many hair-thickening shampoos, conditioners, and some hair oils, as it is said to add body, luster, thickness, and strength to brittle, dry, or thinning hair. The active ingredient that makes this plant viable for such cosmetic purposes is the mineral silica, which horsetail is somewhat abundant in. The leaves of the horsetail may be used fresh (preferably), or dried and prepared as a decoction, or otherwise infused via maceration into an oil. Pre-prepared extracts are also widely available for just the purpose of making hair oils. Controlled intake of horsetail tisanes or supplements may also help to encourage faster and stronger nail growth due to the same reasons that it encourages hair growth. [4]

Because it is a natural buff, horsetail can also be added into homemade soaps to act as a gentle abrasive. Very high dosages of horsetail, or very strong decoctions of its leaves may also be employed to treat dysmenorrhea, heavy menstrual flow, and even coughs, although long-term use is not advised due to possible dangers.

It should be noted that while horsetail is safe to use regularly for topical applications, preparing horsetail (if one is a do-it-yourselfer) must be done with care and caution, as the tiny silica 'deposits' found in the plant's leaves can be an irritant if accidentally inhaled, resulting (in rare cases) in difficulties in breathing and minor injuries to the larynx or lungs. Furthermore, regular oral intake of horsetail, either as a tisane or as a food supplement, is not advised, as it may cause thiamine deficiency (due to thiaminase, an inherent compound that breaks down thiamine) as well as heavy metal poisoning (since horsetail is known to contain chromium). The oral intake of horsetail is also ill-advised for pregnant women and individuals under the age of 20. Horsetail should be used with caution, especially if employed internally, while topical applications are generally safe when done regularly. [5] 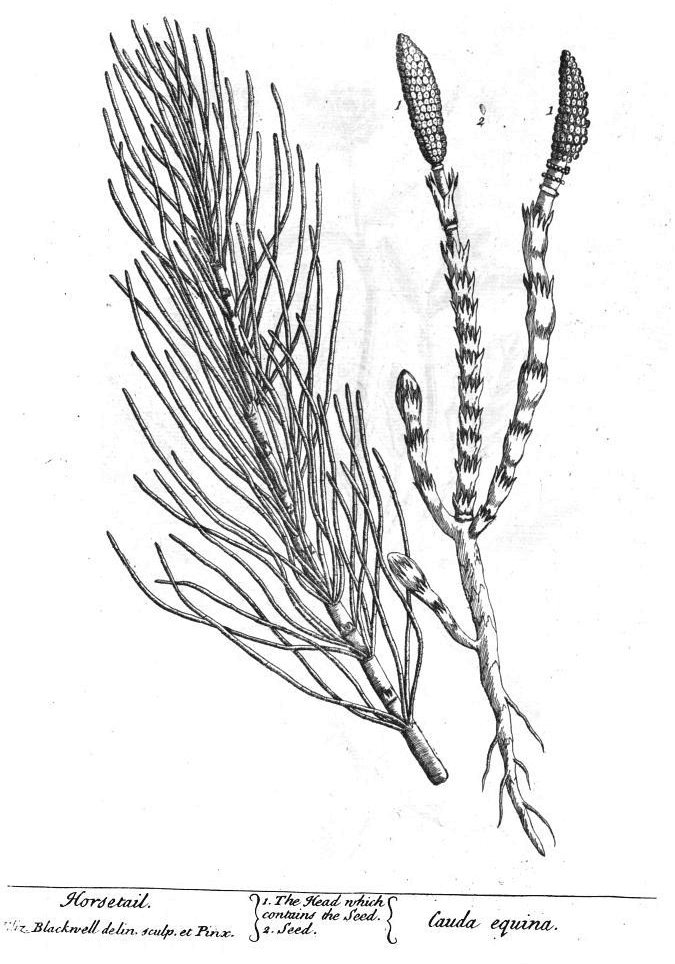