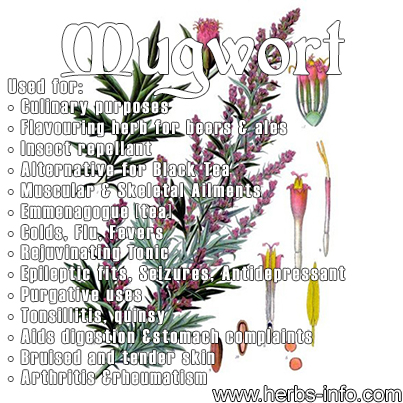 Names of Mugwort, Past and Present

Mugwort is a common herb that grows mostly in waste places, marsh banks, and even in untended and abandoned lots. While considered a native of Europe, mugwort can be found a wider range, including, but not limited to many parts of Asia, the Americas, and even select areas in Arabia and the Levant.

It is characterised by its tall stature (for a shrub), and its angular, sometimes purpulish-hued stems that is replete with smooth, dark green leaves with somewhat serrated edges, covered with fine, down-like growths on the bottom. It features small yellow to reddish-hued oval flowerets that is touched with the selfsame down-like material as the underside of the leaves in its involucres.

Mugwort is closely related to the common wormwood but is discernable from wormwood through the simple differences in the leaves and flowers of the plant which is fairly obvious to even the most causal observer. Mugwort is replete with pointed segments and possesses downy growths only on the underside of the leaves, whereas mugwort lacks pointed segmentations and possesses down in both the upper and lower parts of the leaves. [1]

The earliest use of mugwort in Western history dates back to the Anglo-Saxon conquest, where it was employed chiefly as both a culinary herb and as an early type of flavouring herb for the creation of beers and ales. It is due to this use that one etymological explanation for the origin of its name vis-à-vis: 'mug' (purportedly Anglo-Saxon, lit. 'cup') and 'wort' (Old English for 'plant' or 'herb'). It was typically used in tandem with ground ivy, cinnamon, or ginger to flavour alcoholic drinks, although its use declined overtime, especially with the discovery of hops, which eventually replaced mugwort as a choice flavouring in beers and ales. Some microbreweries and traditionally inclined brewers still continue to use mugwort as a flavouring agent however, and while it lacks mass-market appeal, it nevertheless continues to be quite popular for traditionalists and purists who hanker for more 'authentic' or 'old-time' recipes. [2] 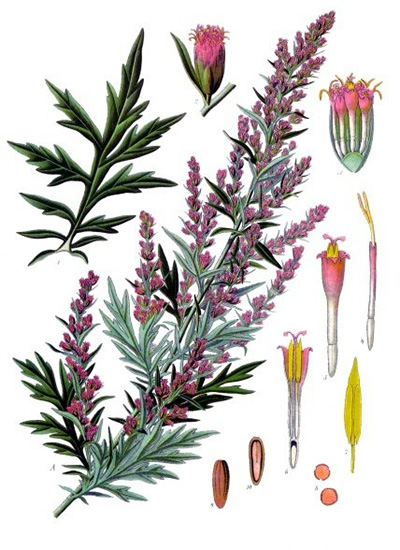 Mugwort has been used for culinary purposes, especially in Asiatic cuisine, where it is integrated into everything, ranging from spice rubs, garnishes, and even desserts. The leaves are even employed fresh and added to soups and stews (it is quite a popular additive in Thai and Korean cuisine), or otherwise incorporated into various warming dishes and used as stuffing for roast poultry and game. When dried and powdered, it is used to incorporate added nuances to sweets – a use that is quite popular in Japan and China. [3] Both Western and Easter herbological practices believe mugwort to be an excellent insect repellant. The dried leaves or roots are often burnt as incense over hot coals, while the roots of the plant are sometimes placed within containers of grain to prevent pests from ruining the stored food. In the West, this pesticide property was employed to protect clothing from being damaged by insects such as moths.

Mugwort is, as mentioned, closely related to the common wormwood - a plant which is notorious for its hallucinogenic properties, and a staple in the creation of the equally notorious liquor absinthe. Despite this relation, mugwort lacks some of the essential oil components found in wormwood, and cannot be used, as can the latter, as a purgative. Mugwort does however possess the selfsame abortifacient and hallucinogenic properties of wormwood (due to the active compound thujone, the same compound that makes absinthe hallucinogenic) however, especially when taken in excess.

In Europe of the mid-1800s, the middle to lower classes of society often employed the dried leaves of mugwort along with a combination of other herbs as an alternative to black tea (Camellia sinensis), which, at the time, was far too expensive for their incomes.

Mugwort is not without its medicinal uses, as it is both a versatile medicinal herb in Eastern and Western alternative medicine. In China and Japan, mugwort is typically dried and shaped into cones, which are then heated and placed upon energy meridians or pressure points to relieve a wide assortment of ills, especially problems related to muscular or skeletal systems. It is usually fermented upon drying, especially in Traditional Chinese Medicine, where it is referred to as moxa, and its subsequent process of burning the cone-shaped moxa upon pressure points is referred to as moxibustion – a practice unique to Chinese and Japanese alternative medicine. [4]

The process of moxibustion is not only performed to relieve often debilitating pain, but also as a means to correct improperly positioned fetuses as in cases of ectopic pregnancies. However, due to its abortifacient properties, such procedures are best performed by experts in traditional Chinese or Japanese medicines, and must never be attempted without proper guidance or experience.

When brewed as a tea, mugwort acts as an emmenagogue which helps to encourage, correct, and regulate irregular menstrual flow, usually when combined with pennyroyal, wild ginger, or rue. Because of this action, mugwort has also been employed in earlier times as an abortifacient, especially when consumed in large doses or if prepared into a very potent decoction and drunk regularly. [5] The use of mugwort is therefore ill-advised for pregnant and nursing women, while its use as an abortifacient (for those who wish to do so willfully) might be potentially dangerous as it has a number of unpleasant side-effects associated with prolonged use or concentrated dosages such as hallucinations, nausea, vomiting, and even death.

When used in small dosages and decocted mildly however, mugwort tea is excellent for staving off colds and the preliminary symptoms of flu and fevers before it worsens. When taken daily in minute doses, it also acts as a rejuvenating tonic, although prolonged or constant use is, again, ill-advised. A somewhat strong decoction of dried mugwort leaves, or powdered leaves taken orally may help in the treatment of epileptic fits and seizures, since it is a time-tested nervine. [6]

When employed fresh, the leaves of mugwort can be used as an effective purgative, especially when used alongside its seeds. The oil of its seeds, when extracted, can also be used by itself as a purgative. Combined with wormwood or wormseed and consumed in small doses, it is highly effective for ridding the body of parasites. When made into a salve by infusing the seeds' essences in lard or shea butter, it can be used as an effective remedy for treating tonsillitis and quinsy, while its roots make for the perfect daily tonic to aid in digestion and soothe stomach complaints when consumed in moderation. When macerated in vinegar, mugwort is said to be an antidote for minor cases of poisoning, especially ones that arise out of eating spoilt food or noxious mushrooms, although this remedy is more traditional than it is reliable. This vinegar maceration however makes for an excellent wash for bruised and tender skin, as it effectively reduces swellings and inflammations. When infused in honey, it makes for the perfect salve for insect bites; it also helps to soothe the pains brought about by arthritis and rheumatism. This honey-and-mugwort infusion makes for an excellent salve to help treat open wounds and minor to major dermal abrasions, as mugwort facilitates in faster wound healing, protecting it from possible infection while hastening recovery. [7]

When combined with other herbs such as St John's wort, it may even be used as a natural antidepressant if consumed sparingly. A light infusion of dried roots and leaves can even be drunk to ease and stave off fatigue, and to act as a remedy for insomnia and anxiety. [8]

In magickal practice, mugwort is believed to protect the bearer from all sorts of spiritual and bodily harm, and was employed since ancient times as a counter-hex. A mixture of the leaves and root of mugwort was often sewn into a pouch and placed under a pillow to encourage restful sleep, while strong tisanes made from mugwort leaves and roots were imbibed as a hallucinogen to encourage lucid dreaming. When smoked, it was supposed to increase one's psychic abilities, while burnt as an incense or used as a smudge stick, it was essential for warding spells and for protection spells, especially when conducting summoning spells. When smoked, the ensuing vapours were said to grant a shaman the ability to commune with spirits or to divine the future. Mugwort was a sacred herb to the goddesses Diana and Hekate, and subsequently, to both herbalists and midwives who followed in the footsteps of those goddesses. Planting mugwort over the entrance to any homestead was said to protect that place from any malignant energies or evil that may be directed at the inhabitants within. A wreath or crown of fresh mugwort leaves gathered on St John's Eve was said to protect its wearer from possession, hexing, diseases, and all forms of misfortune. This practice was adopted into voodoo and hoodoo tradition, where the plant is a general protective and cleansing herb featuring highly in many medicine pouches or fetishes. Pouches containing the leaves, roots, or flowers of mugwort (if not all of the abovementioned plant parts) were said to aid travelers and provide them protection along their journey, as it not only protected them from evils that may beset them on the road, but it also helped to alleviate, if not altogether rid them of fatigue. [9]

Caution should be exercised when using mugwort, not only due to its thujone content, but due to the fact that it is a possible allergen. When employing salves or oils made from, or that contain mugwort, a skin-patch test is a must prior to use. If considering taking mugwort internally, it is best to check first with a licensed expert herbalist prior to use.