Names of Saffron, Past and Present

Saffron is uncanny in its classification as a spice, since its nature rather resembles that of an herb. Unlike other spices, it is neither gleaned from seeds, barks, roots, or any other hard or seemingly impregnable plant matter, but is comprised of the dried stigmas of the saffron crocus (Crocus sativus). Typically characterised by their deep crimson appearance, the stigmas of the ivory-white and purple crocus flower are harvested by hand during blossoming.

Saffron is among the most ancient of spices and has an astonishing history, rich with fable and the mysteries of the distant past. Saffron has been employed variously as a culinary additive, a special type of dye, and a medicinal plant since very ancient times. Long before it was cultivated on a large scale for trade and general consumption, saffron was wildcrafted. Cave art dating to around 50,000 B.C. found in modern-day Iraq has been found to contain Saffron based pigments. The Sumerians were reported to collect saffron for their remedies and magical potions. [1]

Recorded in numerous Eastern and Western herbals, saffron was a prized spice that was at the center of trade and usage long before the advent of Christ. In ancient times it was highly regarded as a medicine, being recommended by various herbals throughout the ages for the treatment of some 90 illnesses. Saffron production is recorded from around 1500-1600 B.C. on frescoes at Thera, a Greek Island in the Aegean (see image). [2]

Medicinally, saffron has been used as a curative spice since the onset of its discovery, with the Phoenicians, Persians, Indians, Egyptians and Chinese alluding to its many therapeutic benefits is their early herbals.

Despite its renown in both Eastern and Western herbal medicine, saffron is more often than not thought of or classified as an Eastern spice, as most of the documented uses of the spice revolve around the eastern part of the world. Despite this, western usage of the spice has also been documented, although usage as it is understood (in the large scale) doesn't come until much later (circa 1000's A. D.) and the time of the great spice trade.

It is believed that saffron was introduced to the Spice Trade via the Mongol horde, who managed to bring the spice and its usage to mainland China. The Mongols themselves obtained the spice from the Persians, who employed it as both a ceremonial and medicinal spice long before it was used as an additive and flavouring for food. With the advent of the Black Death of 1347–1350, saffron became immensely valuable as it was thought to be medicinal. [1] Demand was so great that a fourteen-week-long "Saffron War" broke out when an 800lb shipment was stolen. [3] 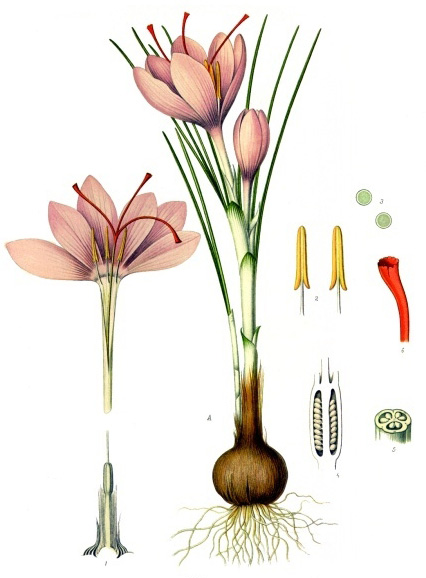 In Egypt, saffron was used particularly as an aphrodisiac, beauty product and an incense, and was often infused into base oils and used as an early type of perfume as well as a massage and bath oil; dried saffron was also burnt as offertory incense in the altars and temples of many cultures. Because of its hydrophilic ("water-loving") nature and 'fast-dyeing' action, it was even used as a cloth dye by many cultures, with particular focus on the Indian and Chinese Buddhists, who (as it is said in ancient lore) dye their robes using saffron (it is actually turmeric, and not saffron that is used to dye their robes, although saffron has indeed been used as a dye, albeit in Egypt, Rome, Venice, and Greece respectively). [4]

Saffron is harvested by hand and subsequently dried - to be sold in whole or powdered form. The saffron plant or crocus itself grows to about 20 – 30 cm, and bears up to no more than four flowers. Only the stigmas of the flowers are used - and to glean 1 lb of dry saffron requires the harvest of 50,000–75,000 flowers. Because of the intensive process required to harvest the stigmas, as well as the limited number of stigmas available per season, saffron was, and continues to be the most expensive spice in the world. [1]

Despite its price, saffron is nevertheless used, albeit in very minute amounts, as a flavouring and garnish for food. Its use for foodstuff is thus often limited to higher-class dishes available only to the elite. In the culinary world, saffron is employed as both a flavouring, an accent, and as a colouring agent for various dishes, typically (but not limited to) meat based dishes and even a few pasties and desserts.

Saffron contains (at the least) some 100 or more volatile compounds, making it one of the most complex spices around. It is a known hydrophilic spice, able to imbue its inherently beautiful rich golden hue to any water-based foodstuffs, making it a choice accent in many desserts. The aroma of pure saffron has been compared to that of dried hay, and while this may seem unremarkable, it has the uncanny ability to improve or compliment the taste of dishes where it has been integrated. 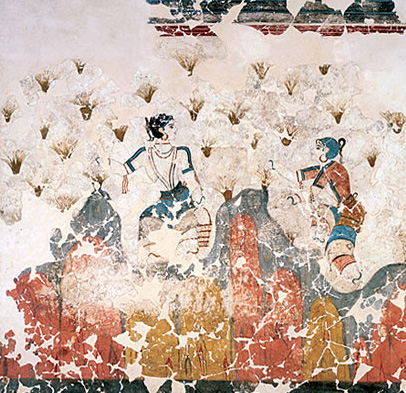 Saffron crocus flowers being gathered by women in a fragmentary
Minoan fresco from the excavation of Akrotiri,
Aegean island of Santorini.

Saffron contains trace amounts of vitamins, phytonutrients, and some minerals that are beneficial to the overall health of the body.

Oils imbued with the properties of saffron were prescribed by early physicians as remedies for open wounds, sores, scabies, and a wide array of other skin disorders. When brewed into a gentle tisane by creating a mild infusion of the spice, it was drunk as a remedy for colic, cough, and indigestion. [4] A tisane made from saffron (and even ingesting saffron by itself) also helps to alleviate joint pains by helping the body rid itself of excess lactic acid which is often the primary cause of discomfort. [5] This tisane may also be drunk as an emanagogue, and as a remedy to help regulate irregular menstrual flow in women.

Saffron oil has been used in traditional Chinese medicine as a digestive aid, while western medicine uses it to provide quick relief to painful and swollen gums in much the same way that clove oil is employed for the same purposes. [6] Sterile water infused with saffron may even be used as eye drops to help relieve general discomfort and minor eye problems. In Indian traditional medicine (Ayurveda), saffron tea or any food that has saffron as an additive in it is usually fed to individuals suffering from fevers or flu, as it was thought to invigorate the body and hasten recovery. This effect has now been proven by medical science as being caused by the active compound crocin. In India, powdered saffron is usually mixed into a paste by diluting it with water, and employed, just like turmeric, as a salve for many topical ailments [7] and has even been used as a hair dye much like cassia, henna, and indigo.

When burnt as an incense and inhaled, saffron may even help to alleviate symptoms of depression (it was once prescribed as a remedy for melancholy during the Middle Ages), as well as alleviate stress and improve focus, memory retention, and encourage enhanced learning capacities in certain individuals (especially children). Consumed regularly, saffron has even been shown to help lower blood sugar levels and bad cholesterol, making it a beneficial spice for both diabetics and individuals who are prone to heart-related illnesses.

Because saffron is a very expensive spice, it is often adulterated with substances of substantially lesser cost - such as turmeric or ground ginger. Ground saffron is much easier to adulterate than when whole, but some examples of adulterated whole stigmas do exist. Due to this, always purchase saffron from reputable dealers. That said, there is nothing wrong with diluted saffron, especially if it is to be employed medicinally, provided that the substances mixed with it are natural. Adulterated saffron is very common in Indian markets, where it is often mixed with turmeric (if powdered), or second class saffron and hibiscus. Provided that the adulterants are natural substances, no harm can come out of investing in '2nd class' impure saffron, as a little of the spice actually does go a long way, even if it is adulterated. Care should be taken when consuming saffron as it is toxic in higher doses. It can cause stomach upset and uterine contractions - thus it is best if pregnant women avoid saffron during their term as it may act as an abortifacient.

In magickal practice, saffron is regarded as a highly potent and effective aphrodisiac, often integrated into sachets, unctions, salves and oils made to incite desire. Saffron is also employed for healing, as it is used as a rinsing prior to performing healing spells or rituals, as it was believed to enhance the effects of the spellworking. When burnt as incense, saffron is said to invite happiness, incite amorousness and desire, as well as improve one's psychical awareness. Saffron is considered a strengthening spice, making it useful for protection spells and charging. [8]