Saw palmetto is a small species of palm, the only one of its kind, which typically thrives in sandy soil. It is characterised by its sharp, sabre-like leaves replete with numerous spikes that serrate the edge of its petiole, as well as for its sprawling trunk. The plant, growing to around two to four metres in length, is extremely long-lived, with the capacity to populate a small area with dense thickets of its own species after a specified amount of time. Saw palmettos are extremely hardy plants, and typically take years to grow into a maturity. Once mature however, they tend to 'bulk-up', and become pervasive (and sometimes even invasive) species, typically growing alongside larger plants such as pine trees, often as undergrowth. [1] 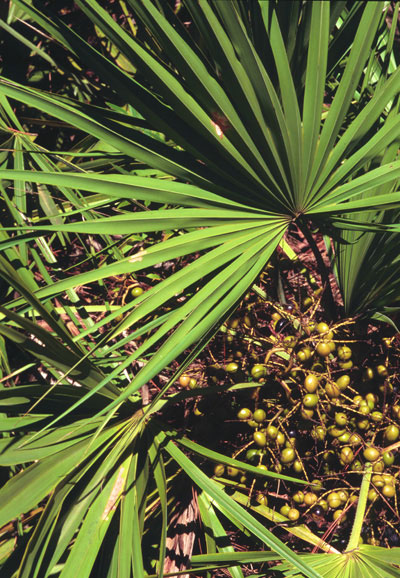 Thought to be endemic to the southeastern parts of the United States, saw palmettos also grow, albeit in smaller numbers, in select parts of China and the pacific. Its use as a medicine however is not well-recorded outside of Western herbalism, although mention of its existence (but not its usage) is present in Traditional Chinese Medicine.

Saw palmettos are chiefly cultivated in the modern context for their berries, which are harvested and subsequently processed for its bioactive compounds, many of which are believed to be therapeutic. The fruits, dark green while unripe and reddish-black to somewhat purplish when ripe, is typically dried and powdered, or otherwise processed into food supplements. While whole saw palmetto berries are available from individuals who specifically wildcraft the commodities, the most common means to employ saw palmetto medicinally is in the consumption of standardised extracts of the plant, which are typically sold encapsulated or otherwise processed into readily-consumable tablets.

During prehistoric times, the South and Southeastern American aboriginals employed saw palmetto as a type of foodstuff – a practice that pervaded throughout the early Native American cultures that thrived in those areas, where it became something of a staple food. Later on, with the advent of agriculture and the establishment of societies, saw palmetto became something of a famine food, typically gathered and preserved via drying, and consumed during times of drought. Both animals and humans partook of saw palmetto, and Native American medicine men (puhagan) employed the berries for both its nourishing and curative properties. When unripe, the berries are very bitter, with undertones of sourness, making it a prime choice for astringents and carminatives. When ripe, it takes on a more palatable note, and where it is then typically dried, to either be consumed in its shriveled state, or ground into a fine powder and mixed with other berries, rendered fat, and jerked meat in the creation of nutritive 'instant meals' such as pemmican. [2]

Aside from its use as a famine-food, raw saw palmetto, when ground into a powder, has traditionally been employed as a poultice to disinfect wounds and to staunch bleeding, although it proves (due to its astringency) to be a very uncomfortable remedy for such applications.

In the modern context, saw palmetto extracts are typically consumed as a food supplement for the therapeutic treatment of male hormone-related disorders such as benign prostate hyperplasia (BPH) and prostate cancer. While the consumption of whole berries may possibly yield similar benefits, standardised extracts prove to be more concentrated, and (as is generally thought) more effective as a medicinal supplement. Typically sold in various measures (by milligram), it is sold in health food stores as a complimentary supplement for men (as a stand-alone), or is integrated into multivitamins or food-supplements targeted towards the male demographic with the idea that it not only helps to allay the possible occurrence of prostate-related disorders, but that it also helps to allay, if not reverse baldness. [3]

Due to its therapeutic benefits, saw palmetto has become a very popular ingredient in many supplements and vitamins geared towards males, although in strict medicinal applications, saw palmetto can be used by either gender – as it can also help to correct hyperandrogenic conditions such as polycystic ovarian syndrome and female urogenital complaints. [4]

Outside of the realm of men's food supplements, saw palmetto extract, and the whole berry itself (either eaten raw in its dried or fresh state, or otherwise decocted into a potent juice) has been employed by traditional herbalists for general urinary complaints, and as a highly nutritious tonic for convalescent individuals who have undergone long bouts of illness. Because of its fatty-acid content, saw palmetto is a prime nourishing herb, especially if employed as a complimentary foodstuff for individuals who suffer from wasting diseases or general malaise. [5]

When prepared as a tonifying drink, the ensuing liquor also possesses surprising expectorant properties, making it extremely useful for treating coughs and other bronchial-related problems. Finely powdered saw palmetto may be combined with equally finely powdered ginger and left to infuse in honey for some months. This ensuing syrup may be taken as a cure for whooping coughs, sore throats, laryngitis, and some symptoms associated with pneumonia. [6]

While the use of saw palmetto as a supplement is generally safe, people who have a history of high blood pressure or heart disease should use saw palmetto with caution, since an active compound found in the extract – beta-sitosterol – is chemically similar to cholesterol, and may result in a furtherance of the already present disease if consumed in excess. Likewise, men and women both must consume saw palmetto extracts moderately, as its androgenic properties may interfere with the normal production of hormones in the body if consumed in excess for prolonged periods of time. Because of this, women who are under hormonal contraceptives should forego the consumption of saw palmetto. That said, saw palmetto should never the used as an alternative to synthetic hormones for the purposes of breast enlargement, estrogen-therapy, or gender reassignment, as its hormonal capacities prove to be very little, and may be unpredictable, if not altogether dangerous.

Names of Saw Palmetto, Past and Present