Thyme is a low-growing plant that can be safely called a 'distant cousin' of the mint family. Due to its aromatic nature and vast range of scents and aromatic intensities it has long been considered a valuable additive to cuisine, especially when paired with other aromatic herbs such as rosemary and marjoram. As with rosemary, thyme is commonly cultivated at home and grown in small pots to be used fresh; however dried thyme is also widely available for use as a seasoning, especially for egg-based dishes and soup 'bouquets' – among them bouquet garni and herbes de Provence, of which thyme is an integral ingredient.

Among aromatic herbs and spices, thyme is well-known for its wide array of different 'flavours' ranging from the tangy and lemony, to the somewhat minty, depening on the variety. These various 'flavours' are actually nuances of the herb's scent, as its aroma varies depending upon the cultivar, of which many exist – some more prized than others. [1] Thyme flowers have also been a prime source of some of the finest honeys in the world, with Grecian wild-thyme honeys being among the most prized by connoisseurs as it is known to take on some of the nuances of the plant's flavour and aroma – a feature that makes thyme honey doubly valuable for use in the creation of meads and its incorporation into a wide assortment of sweetmeats and desserts. [1] Aside from its long-standing reputation as an excellent culinary herb, thyme has also been used medicinally since ancient times; and, as with many herbs, is replete with its own distinct folkloric properties and uses.

Prior to its use as a well-loved and variegated culinary herb, thyme first began use as a strictly esoteric herb. The earliest mention of the use of thyme dates back to the time of the Ancient Egyptians and then Ancient Greeks. The Egyptians, masterful embalmers, used thyme in their mummification recipes, to act as a retardant against bacteria, and consecutively, decay: How much more proof do we need that it has powerful antibacterial properties?

The Greeks employed the fragrant herb as incense for ritual offerings and the appeasement of deities, to which its name, thyme, literally meaning 'spirit' or 'soul', as well as 'the act of fumigation' (Gk. thymus) is credited. [2] Thyme was also popular with the Romans from the time of the Rome's foundation until well into its zenith as a type of incense used to deodorize rooms. [3] During those times it was common practice to use thyme incense not only for ritualistic purposes, but for aesthetic and even medicinal purposes as well, as it was believed, by both the Early Greeks and Romans, that the aroma of thyme would ward off sickness, evil spirits, and of course, insects – no doubt a common pest even in those olden times.

By the Middle Ages, thyme had taken on further occultic purposes and was employed, interestingly, as a symbol of courage and valour. To this effect, it was not only popular among the ladies in court due to its aromatic nature (of which their kerchiefs were sometimes doused with water scented with thyme), but served as tokens of favour and 'amulets' bearing well-wishes, as sprigs of thyme were usually gifted to jousting knights by their ladyloves or their admirers, to grant them the courage to "tourney" gallantly. [4]

As with the Roman practice of using thyme as a form of incense, its fumigation purposes also played a vital role in early methods of 'aerial sanitation', as it was commonly used to drive away insects in sickrooms and birthing places. Aside from serving as a type of insect-repellant cum-air freshener, thyme was also believed to stave away sickness by driving away malignant spirit. The true medicinal benefits of thyme as applied in the general practice of what was then commonplace medicine (i. e. herbalism) came about much later, when the herb began to be employed by apothecaries to treat a wide assortment of maladies, usually involving some dermal infection or other, as thyme was discovered to possess very potent anti-fungal and anti-viral properties, a feature still in use to this day in hair rinses and facial washes involving steeped, macerated (usually in vinegar) or boiled parts of thyme, either by itself or in combination with other medicinal herbs. [5]

Because of its potent disinfectant and antiseptic properties, a decoction of thyme was also employed as a type of rudimentary mouthwash during the olden days, as well as a sterilizing and medicating agent for bandages used to cover open wounds and eruptions.

Thymol, the principal ingredient in thyme, being a strong antiseptic is commonly found discreetly mixed in commercialized mouthwashes.. [7] It is also a very common additive in perfumery and other cosmetics. Aside from being very fragrant, studies have also shown that linalool may possess anti-carcinogenic properties and that minute amounts of the compound may be beneficial for the prevention and perhaps even the treatment of some kinds of cancer. [8] This data is however conflicted by the fact that linalool can be an allergen, usually causing contact dermatitis and eczema in individuals with very sensitive skin. [9] 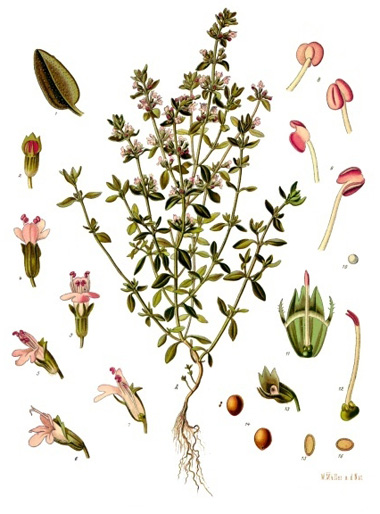 Thyme as antiseptic and antifungal: These compounds, along with a myriad of others contribute to thyme's potent anti-fungal and antiseptic properties, making it a great herb to have if you're prone to rashes or fungal infections, although care should always be taken in the frequency of its use.

Thyme for bronchial complaints / colds: Thyme is also traditionally ascribed as a cure for many bronchial complaints such as whooping cough and asthma. When thrown into a pot of boiling water and inhaled, its steam can help to alleviate the symptoms of colds and flu, as well as to soothe the mind and senses. A strong decoction of thyme mixed with a natural sweetener, (traditionally honey, but stevia, unrefined cane sugar, or jaggery may also be employed) makes for an excellent all-natural remedy for coughs, sore throats, and other bronchial problems. [10]

Thyme for urinary and menstrual complaints: Thyme is also traditionally thought to assist in various urinary complaints, as well as to ease symptoms commonly experienced during menstruation, making the herb handy to have for curing a wide variety of female 'ailments'. [11] Thyme is said to be most potent when used in tandem with other herbs for a specific therapeutic purpose – such as rosemary and sage for hair and scalp problems, cloves for uterine and urinary problems, or infused or macerated into a base oil for general use as either a sanitizer or a topical disinfectant.

Thyme for rheumatism and arthritis: Thyme infused oil may also be used to alleviate the symptoms of rheumatism and arthritis, although a tea made from thyme leaves combined with ginger root works much faster than topical liniments. [12] A better alternative to obtain thyme liniment without the need for slow maceration in a base oil or the hassle of slow-heating an oil to be infused with its essence is to procure readily available thyme oil, which can be used by itself or diluted with a base-oil as a massage oil, a hair oil, or to provide quick relief for sore gums. [12]

Aside from being an excellent air-freshener, thyme can also be used as an incense by throwing the leaves onto hot coals.

Thyme is reported to be smokable - either by itself or mixed with other smokable herbs (the most common being tobacco), to generate a feeling of calmness as well as to alleviate headaches. [13] Care should be taken when consuming thyme, especially wild thyme, as in large doses it can cause a mild hallucinogenic effect.. [14] Thyme is also reported used magickally to promote can increase in clairvoyant abilities, to bring courage, to help bring about visions (via dreams, and not, as it should be noted, via a trancelike state as with hallucinogenic plants) as well as to promote luck especially in monetary matters. [15] Thyme is also considered a great herb for cleansing and warding, as a sachet of thyme leaves placed above doorways, either by itself or combined with other protective herbs, is used to help to deter "hexes, malignant intentions, and bad energy". [15]

Names of Thyme, Past and Present