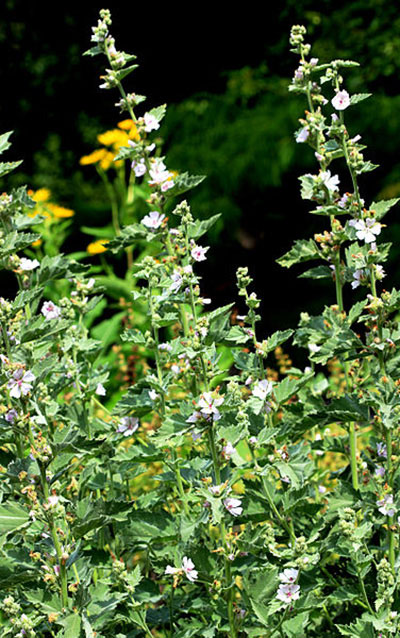 The root, leaves, and blossoms of the Althaea officinalis plant are used in traditional Chinese medicine for maladies of the throat and bronchial passageways. [1] Marshmallow is a commonly-used ingredient in herbal teas marketed for medicinal purposes. [2]

According to analyses of laboratory tests, Althaea officinalis has a high rate of antioxidant activity. [3]

The cough-suppressive activity of codeine was also experimentally determined in this study under the same circumstances as that of Althaea officinalis’s rhamnogalacturonan. At an oral dose of 10 mg kg -1 b.w., codeine’s activity was said to be comparable to that of higher-dose rhamnogalacturonan in unsensitized animals. [5]

Nosál'ova et al. (1992) also had ventured on studying the efficiency of Althaea officinalis polysaccharides in suppressing cough. In their study, the polysaccharide obtained from the said plant’s roots was investigated for its antitussive activity in unanaesthetized cats, and cough was evaluated with respect to the changes in tracheal pressure. The results demonstrated the ability of the Althaea officinalis polysaccharide to effectively decrease the number of cough efforts from both laryngopharyngeal and tracheobronchial areas of the respiratory system. Moreover, when compared to prenoxdiazine (a certain antitussive) at a dose of 30 mg kg -1 b.w., the polysaccharide (at 50 mg/kg b.w.) was considered more effective as regards cough suppression. [6]

Aside from its purported antitussive property, J. Williamson and C. Wyandt’s Herbal Therapies: The Facts and the Fiction (1997) lists Althaea officinalis as among the traditional treatments for the irritation of mucous membranes (i.e., demulcent), throat ulcers, and gastric ulcers. According to this guide, the plant has other properties of medicinal value, too, including being an expectorant and diuretic. [7]

A study by Hage-Sleiman, Mroueh, and Daher (2011) also has reinforced prior findings about the potential role of the aqueous extract of Althaea officinalis flower in lipemia, gastric ulcer, inflammation, and platelet aggregation. In their study, a rat model was used, and no visible adverse effect from the administration of Althaea officinalis flower aqueous extract was observed. [8]

William, John Fyfe and John Milton Scudder's "Specific diagnosis and specific medication" (1909): Marshmallow Althaea has been employed with advantage in many affections of the kidneys and bladder. It increases the secretion of urine and exerts a demulcent influence upon all parts of the urinary mucous membrane. In acute cystitis its influence is relieving in character and in strangury it has often proved useful. In gastritis enteritis and bronchitis it is deemed a remedy of merit. It is also of value in inflammation of the fauces and tonsils and in coughs and hoarseness its soothing influence has been found useful.

"Marshmallow is an excellent remedy in diseases attended with pain especially of the urinary organs. It relaxes the passages in nephritic complaints in which cases a decoction is the best preparation." - Beach

Althaea officinalis is diuretic and demulcent.

Althaea officinalis is an herbaceous perennial plant several feet in height with heart shaped or ovate downy leaves and a long tap shaped and fleshy root. It grows in moist and marshy places in Europe and in this country but in the former is extensively cultivated for medicinal purposes. In Europe the root flowers and leaves of Malva sylvestris Malva rolundifolia and Althaea rosa as well as of Althaea officinalis are employed in medicine. Their qualities are not materially different As found in commerce marshmallow root is in fragments several inches in length deprived of their epidermis round or in split pieces whitish light and brittle. When chewed it has a mucilaginous and sweetish taste. Its chief constituents are mucilage and starch making about 73 per cent of the whole it also yields some sugar phosphate of lime and fatty oil. Cold water extracts its mucilage but hot water its starch also. Besides these elements it contains a proximate principle called althein which is crystallizable inodorous almost tasteless and is soluble in water and diluted alcohol.

History: Nothing can illustrate more perfectly the carelessness with which singular qualities are sometimes applied to medicinal substances than the history of this simple plant. Its very name according to Dioscorides was given it in consequence of its numerous virtues because it is resolvent and maturative brings abscesses to a head and cicatrizes them when voided. Its root boiled in water or wine was applied as a pessary in uterine inflammations and its decoction as an injection to promote the discharge of the placenta. Its juice with wine was esteemed diuretic and useful in dysentery with vinegar it was a remedy for toothache oil in which its seeds had been cooked was a terror to serpents and good for dysentery diarrhoea spitting of blood etc etc. Pliny after enumerating these and similar statements says. Other marvels are told of mallows but the greatest of all is that whoever will daily drink half a cupful of its juice will be exempt from all diseases. Still more marvellous is that which he himself declares to be ascertained that the delivery of women in labor is hastened by mallow leaves strewn under the bed he adds that they must be removed immediately after the delivery for fear that the uterus should also be expelled. He also avers on the authority of Xeno crates that the seeds of a species of mallow in contact with the genital organs of women infinitely excite their venereal desires and that three roots applied to the same part have a similar effect. With more truth he states that injections of mallow tea are very serviceable in tenesmus and dysentery and that taken internally it relieves dysury.

Action and Uses: Marshmallow decoction is an emollient protective and somewhat nutritious but when long and abundantly used it impairs the digestion. It is employed as a demulcent in all inflammatory and irritable conditions of the mucous membrane of the respiratory digestive and urinary organs and poultices formed of the bruised or powdered root may be applied to local inflammations affecting the skin. The decoction has been used as an injection in dysentery and in inflammation of the uterus and vagina and also to lessen rigidity of the soft parts in cases of difficult labor. A preparation sold as Marshmallow paste is a very agreeable demulcent but contains no marshmallow at all It is made of gum Arabic sugar and white of eggs and is flavored with orange flower water.

Other names for Althaea Officinalis, Past or Present

[7] Williamson J.S. & Wyandt C.M. (1997). Herbal Therapies: The Facts and the Fiction. The University of Mississippi School of Pharmacy. 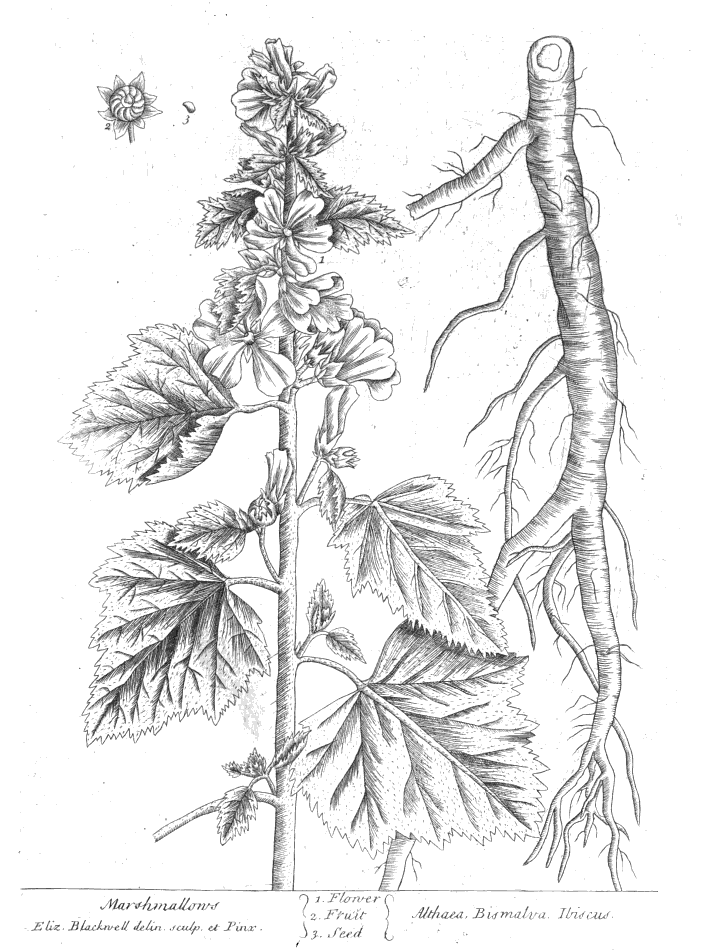