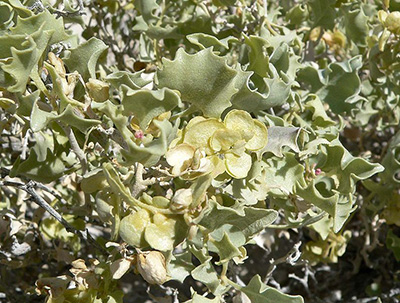 Arrach is a hardy perennial plant native to the mountainous regions of Europe and Asia.

The cultivated variety has been eaten traditionally as a substitute for spinach, but the wild variety is thought to have more medicinal value. English herbalists have considered it useful in preventing / alleviating ailments related to pregnancy and childbirth. [1]

The name "Stinking Motherwort" is associated with use of arrach as a remedy for hysteria and nervous conditions. [2]

Researchers have determined that the "rotting fish" scent--which characterizes wild Arrach--is a result of the plant's trimethylamine content. [3]

Arrach is considered to be diuretic and diaphoretic.

Elizabeth Blackwell's "A Curious Herbal" (1751): 1. The stalks grow to be 3 foot high, the leaves are a plae green, and sometimes purplish, and the flowers a greenish yellow. 2. It grows in Gardens and flowers in June and July. 3. The leaves are frequently boiled and eaten, like coleworts, with salt meats and in sallads, and are esteem'd cooling and moistening, rendring the body soluble, and good for hot biliose constitutions - they are used with other emollient herbs in cooling Glisters.

Description: It is so commonly known to every housewife it were but labour lost to describe it.

Time: It flowereth and seedeth from June to the end of August.

Government and Virtues It is under the government o the Moon in quality, cold and moist like unto her. It fofteneth and loofeneth the body of man, being eaten and fortifieth the expulsive faculty in him. The herb, whether it be bruised and applied to the throat or boiled and in like manner applied it matters rot much, it is excellent good for swellings in the throat; the best way I suppose is to boil it and having drunk the decoction inwardly apply the herb outwardly, and the decoction of it besides is an excellent remedy for the yellow jaundice.

ARRACH WILD and STINKING: Called also vulvaria, from that part of the body upon which its operation is most; also dog's arrach, goat's arrach, and stinking motherwort.

Description: This hath small and almost round leaves, yet a little pointed and without dent or cut of a dusky mealy colour growing on the lender stalks and branches that spread on the ground with small flowers in clusters set with the leaves, and small seeds succeeding like the rest peristiing yearly, and rising again with its own sowing. It smells like old rotten fiso or something worse

Place: It grows usually upon dunghills.

Time: They flower in June and July and the feed is ripe quickly after Government and Virtues Stinking arrach is useful as a remedy to help women pained and almost strangled with the mother by smelling to it but inwardly taken there is not a better remedy under the moon for that disease I would be large in commendation of this herb were I but eloquent. It is an herb under the dominion of Venus and under the sign Scorpio. The works of God are given freely to man; his medicines are common and cheap and easy to be found; the medicines of the college of physicians are dear and scarce to find. I commend this for an universal medicine for the womb and such a medicine as will easily safely and speedily cure any disease thereof as the fits of the mother dislocation or falling out thereof; it cools the womb being over heated and let me tell you this and I will tell you but the truth heat of the womb is one of the greatest causes of hard labour in child birth. It makes barren women fruitful; it cleanseth the womb if it be foul and strengthens it exceedingly; it provokes the terms if they be stopped and them if they flow immoderately you can desire no good to your womb but herb will effect it therefore if you love children if you love health if you ease keep a syrup always by you made of the juice of this herb and sugar or if it be to cieanse the womb aiid let such as be rich keep it for their poor neighbours and bestow it as freely as I bestow my studies upon them or else let look to answer for it another day when the Lord shall come to make inquisition blood.

William Joseph Simmoite - Medical Botany; or, Herbal Guide to Health (1848): ARRACH; Arrack, called more botanically orache or Atriplex Patula, under Venus in Scorpio consequently useful in all diseases affecting the abdomen. A small wild plant grows about farm yards and in waste grounds; the stalks a foot long but weak of a pale green. The whole plant is covered with a sort of moist dust in large particles and smells like bad fish. Make a syrup of a pint of its juice and two pounds of sugar; or the leaves may be made into conserve with three times their weight of sugar; it will keep two years. Used in either form in all hysteric complaints, it cures fits and promotes the menses and the necessary evacuations after delivery. There is a garden Arrach but its virtues are not of so much worth in the medical way.

Analysis: Culpeper emphasizes that there is a difference between "Garden Arrach" and "'Wild and Stinking' Arrach." He also refers to the latter as "Vulvaria," "Dog's Arrach," "Goat's Arrach" and "Stinking Motherwort." Culpeper explains his view that "'Wild and Stinking' Arrach" is responsible for "diseases" having to do with menstruation. Both Culpeper and Simmonite describe the plant as bearing an intolerable odor; according to Culpeper "like rotten fish, or something worse"; Smmonite makes a similar reference to "bad fish." The names "Dog's Arrach" and "Goat's Arrach" imply that the "wild" variety of Arrach is inferior to the "garden" variety.

Despite Simmonite's description of wild Arrach as smelling like "bad fish," he proceeds to explaint that the garden variety is "not of much work in the medical way," whereas the wild variety is "consequently useful in all diseases affecting the abdomen, [an herb that] cures fits and promotes the menses and the necessary evacuations after delivery."

Other names for Arrach, Past or Present 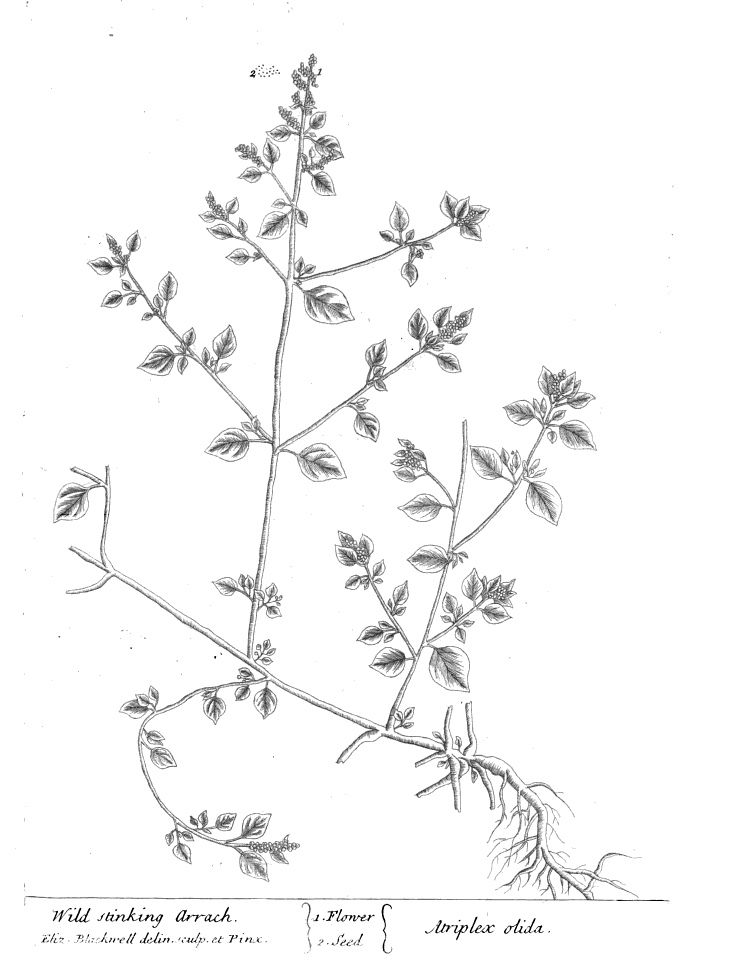