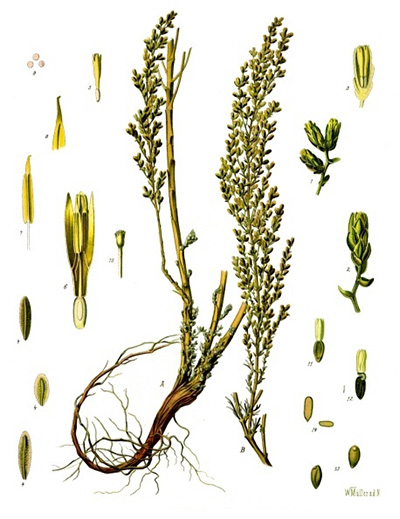 Also known as Sweet Wormwood, Sweet Annie, Sweet Fern, Sweet Sagewort or Annual Wormwood, Artemisia annua is a hardy perennial herb originally native to Asia but now grows naturally worldwide. [1][2] It has long been recognized by Traditional Chinese Medicine (pinyin: qing-hao) as a useful plant and the Chinese Handbook of Prescriptions for Emergency Treatments (340 AD) recommended a tea made from the dried leaves as a treatment for fevers. [3]

As the name Wormwood implies, the plant has had a tradition of use as an antihelminthic - i.e. for the treatment of parasites. Artemisia has a bitter taste and there is also a long tradition of addition of wormwood to beverages - including vermouth and the notorious absinthe - however note that the wormwood plant used for the preparation of absinthe was Artemisia absinthium, not Artemisia annua. Wormwood (presumably A. absinthium) has also apparently even been used as an aphrodisiac in the past, but large doses are said to have unpleasant and significant toxic effects including nightmares, convulsions, and even hallucinations. It is advised not to take wormwood in large amounts or over a prolonged period. [4]

Aretmisia and Cancer: Artemisia annua sprang to fame as a possible anticancer herb in 2001, when two researchers at the University of Washington noted that wormwood showed highly selective activity against breast cancer cells. [5]

Artemisin and its derivatives have been shown to induce apoptosis of prostate cancer cells, and also activity against breast cancer cells, leukaemia, colon cancer and other cancer cells. A significant body of scientific research investigating the anticancer properties of Artemisia annua has been performed since 2008 - indicating potential for development of both therapeutic and preventative treatments.

Aretmisia and Malaria: A recent US study by Elfawal et al. (2012) declared that Artemisia annua may be an effective therapy against malaria and may be a valuable addition to the treatment strategies globally used in reducing malaria morbidity and mortality. Artemisinin, which is isolated from Artemisia annua leaves, is today's most effective pharmacological remedy against malaria. The drug is given in combination with other antimalarial drugs in order to prevent resistance common to monotherapies. In the study by Elfawal et al. (2012), the efficacy of dried leaves of whole plant (WP) Artemisia annua administered orally was compared to that of pure artemisinin in comparable dose in a rodent malaria model (Plasmodium chabaudi). Results revealed a more significant reduction in parasitemia upon the oral delivery of a single dose of WP Artemisia annua (containing 24 mg/kg artemisinin) than a comparable dose of the purified drug, possibly due to the 40-fold bioavailability increase of artemisinin in the bloodstream of mice fed with the whole plant. [6]

Aretmisia as anti-viral:In more recent research, artemisin, a compound extracted from A. Annua, has been demonstrated to inhibit a number of viruses, including herpes simplex 1, hepatitis B & C.

Aside from being primarily antimalarial, the artemisinin that can be extracted from Artemisia annua has been found by numerous studies to be effective against a wide range of viruses, the fungus Pneumocystis jiroveci, the parasitic protozoa Toxoplasma gondii, [7] a few human cancer cell lines, [8] and other parasitic infections, such as schistosomiasis, [10] leishmaniasis, [12] Chagas disease, and African sleeping sickness. [13]

Efferth (2007) produced evidence on the cytotoxic (i.e., cell-killing) and inhibitory activity of artemisinin against tumor cells. He also investigated and identified the candidate genes that may be responsible for the tumor cell sensitivity and resistance to artemisinin. [8] Earlier in 2006, he presented a comprehensive review focusing on artemisinin's mechanism of action in tumor cells as regards (a) the induction of apoptosis, or programmed cell death, (b) multidrug resistance, (c) antiproliferative and antiangiogenic (i.e., blood vessel-inhibiting) effects, (d) oxidative stress, and (e) oncogenes and tumor suppressor genes. [9]

Per report from the Centers for Disease Control and Prevention, leishmaniasis occurs in focal areas in more than 90 tropical countries, predominating usually in rural areas over urban setting. The infection is parasitic in nature, the bite of phlebotomine sand flies being the mode of transmission by which the Leishmania parasite obtains entry inside the host. [11] Sen et al. (2007) studied the anti-leishmanial activity of artemisinin from Artemisia annua against both promastigotes and amastigotes. Their study concluded that indeed, artemisinin triggers the induction of cell-cycle arrest and apoptosis in Leishmania donovani promastigotes and that more research should be undertaken to investigate artemisinin's antileishmanial properties. It should be noted that the anti-leishmanial activity observed in this study had also a high safety index (>22-fold), making artemisinin a good therapeutic option for the treatment of leishmaniasis. [12] Avery et al.'s study (2003) on artemisinin and its analogues also had suggested artemisinin analogues as potential drug candidates against not only malaria but also leishmaniasis. In this study, leishmanicidal activity was noted in micromolar concentrations. [14]

Chagas disease is a potentially life-threatening disease, according to the World Health Organization (WHO), caused by the vector-borne parasite Trypanosoma cruzi. [15] African sleeping sickness is another vector-borne parasitic disease; this time, it is caused by Trypanosoma brucei, protozoa transmitted to humans by the tsetse fly (Glossina species). [16] The study by Mishina, Krishna, Haynes, and Meade (2007) revealed that artemisinin compounds inhibit the in vitro growth of cultured Trypanosoma cruzi and Trypanosoma brucei rhodesiense at low micromolar concentrations, suggesting further research on Artemisia annua's artemisinin and its potential use as part of the therapeutic options for both Chagas disease and African sleeping sickness. [13]

Aside from artemisinin, which is the most active chemical constituent in Artemisia responsible for its pharmacological properties, several studies indicate that the crude extract of Artemisia has other compounds such as flavonoids in it. Some of these are said to enhance the activity of artemisinin against Plasmodium species. [17]

[5] http://www.ncbi.nlm.nih.gov/pubmed?term=Artemisia%20annua%20cancer - 37 scientific studies retrieved by search on 'Artemisia annua' and 'cancer'. (See also - Schaller, James MD. The Use of the Herb Artemisinin for Babesia, Malaria, and Cancer: All the Practical Information You Need to Make Smart Decisions on Artemisinin. )