The caper plant is a perennial winter-deciduous, shrub-like plant that is typically found in waste areas in the wild, usually alongside plants of a similar specie, although it has been widely cultivated as a culinary additive, a spice, and a foodstuff since prior to the advent of the Industrial Revolution. The caper plant is characterised by its large, fleshy, somewhat glossy leaves and for its showy, gaudy inflorescence, which are typically of a pinkish-white to carnation hue. It is most distinctive for the collection of stamens, usually violet-hued, and a singular stigma which grow profusely from beyond the collection of four sepals. It is known for its highly aromatic perfume, making it an attractive garden plant.

The caper plant is commonly thought of to be endemic to the Mediterranean region, where its usage is quite popular and its growth is highly prolific, although there may be a strong possibility that it had originated somewhere in the Middle East and was only later introduced via natural means to the Mediterranean. It is commonplace in Morocco, Turkey, and the Iberian peninsula, with a distinct preference for harsh and often unsuitable environments, although it is capable of thriving in otherwise normal, fertile settings. [1]

Capers have long been employed as a foodstuff since the time of the Ancient Greeks, where they were consumed for both their flavourful nature and their medicinal benefits; although their earliest usage began chiefly for medicinal purposes. Nowadays, capers are usually cultivated under controlled settings, typically through the use of cuttings in lieu of sprouting seeds, although the latter practice is sometimes employed in culturing. Capers are usually chiefly cultivated for their unripe flower buds (generally known solely as capers) and for their small berries (called caper berries), both of which are often employed as a condiment, a snack, and as a culinary additive. Both constituent parts, generally the size of a kernel of corn, are typically preserved in brine, or a combination of vinegar and salt, and employed in their raw state, although some culinary practices may employ both the berries and the buds in sauteed form - a practice which is however uncommon.

The most common application for capers and caper berries is as a culinary additive, a condiment, and a snack food, typically consumed by and large by Italians, and thus is considered a strongly integral part of their cuisine's distinctive flavour. The flavour of capers and caper berries strongly resemble that of mustard, due to the presence of mustard oil (glucocapparin) which is found in profusion in capers. This release of flavour is usually only possible through the pickling or brining process, and would otherwise be discernable only in the slightest should the buds or berries be employed raw and unpickled. Aside from glucocapparin, the brining solution also creates an enzymatic reaction that results in the formation of rutin, a chemical compound which can take the form of crystallised white spots found on whole buds and berries, which lend them a salty-tangy aftertaste which in stark contrast to the mustardy flavour, making the flavour profile of capers relatively complex. When employed as a culinary additive, capers can be integrated into a wide assortment of dishes, typically those of a mild flavour to help improve their overall flavour profile, or otherwise compliment what would otherwise be a 'bland' dish. Both capers and caper berries are integrated into salads, pasta-based dishes, and pasta sauces in order to add body and a distinctive nuance. One of the most popular sauces - tartar sauce - lists ground or pulverised capers as one of its integral ingredients. [2]

Capers can also be integrated into sundry other foodstuffs, although due to their distinctive flavour, they are often found in milder dishes such as seafood and poultry. They may also be employed as an additive or a spice for meat-based dishes such as beef or lamb, and (albeit rarely) even game. They are typically served with cured or cold smoked salmon, halibut, or trout, although they can be consumed as a side-dish for meals such as fresh raw squid or beer-boiled shrimp. Their use even extends to desserts, as they are often mixed with things like cream cheese, yoghurt, cottage cheese, Gouda cheese, mozzarella, and in some instances, even ice-cream. Capers have even been employed as a substitute for olives in martinis, or as a garnish for beverages such as champagne or chilled white wine. [3]

Capers have even been employed medicinally, with the pickled buds and fruits having been prescribed by ancient medicinal texts as a remedy for flagging appetites. Foodstuffs containing caper berries or capers are often given to individuals who suffer from anaemia, hemorrhoids, and hemophilia. They have even been prescribed for individuals who suffer from high-blood pressure, due to the active compounds rutin and quercertin - both powerful antioxidants which are capable of lowering LDL cholesterol. [4] Both the buds and the fruits of the caper plant contain significant amounts of essential vitamins and minerals which are integral for the overall health and wellness of the body, all in a low-calorie, low-fat package. Capers are also well-known as a remedy for colic, flatulence, and all types of stomach complaints. If consumed in moderation as a snack, one may benefit form the antioxidant and cardio-protective properties found in the caper fruit and buds. In Greek folkloric medicine, the root and immature shoots of the plant have been employed as a potent analgesic, usually by being brewed as a tisane. [5] When combined with the buds or the berries, one can create a powerful anti-bacterial, anti-carcinogenic, analgesic, and anti-inflammatory beverage. [6] When drunk in moderation they can help to improve cardiovascular health and may even help to prevent the occurrence of certain types of cancers. [7]

When applied topically, they can help to heal minor and moderate wounds and prevent the possibility of infection. Their anti-bacterial properties may also help to hasten the healing of injuries, improve overall skin texture, as well as fight against topical parasites and fungal infections. [8] When applied as a hair rinse, they may even help to increase blood-flow to the scalp, fight against dandruff, eczema, parasites, and may even possibly increase the rate of hair growth. The fruits or whole buds of the plant, when made into a mild decoction, may even be drunk as a maintenance remedy for the management of diabetes and as a general health tonic.

Capers, whether brewed as a decoction, or otherwise consumed as a foodstuff, may even prove to be beneficial for diseases such as gout, arteriosclerosis, anemia, rheumatism, arthritis, and even gout. Aside from the fruits and buds, the roots of the plant itself may be employed as a medicinal remedy, with more potent effects than either the buds or the fruits solely. Moderately strong to very strong decoctions of caper root have been employed by traditional herbalists as a remedy for dropsy, gout, anemia, arthritis, rheumatism, and lumbago. [9] When crushed and made into a poultice, they may be applied to rheumatic or arthritic joints or any area with muscular pain to help relieve pain and reduce inflammation. Very powerful decoctions of the root (often accompanied by the fruit or buds) have even been employed as an emmenagogue, and, in some cultures, even as an abortifacient. Aside from these general remedies, capers possess only limited medicinal uses, although such uses are in themselves are highly beneficial.

In spite of their ancient status, capers have had very limited usage when employed for esoteric purposes. They were used for the creation of love and lust potions, or otherwise employed as an incense for similar purposes. They may be employed as a protective herb, although, if worn for talismanic purposes, they may act more as a love charm than a protection charm. Because of their purported ability to incite desire or lust, they may be helpful for glamour spells and fixing conjures. [10]

While capers are considered relatively safe for general consumption, pregnant women should avoid the overconsumption of foodstuffs containing capers as these may cause complications that may result in miscarriage. The topical application of capers may also cause contact dermatitis for some individuals who have very sensitive skin, so careful application and a patch-test prior to general usage is advised. As with all things, moderation is nevertheless stressed when it comes to their consumption as a foodstuff and their usage as a medicine.

Capers - Other Names, Past and Present 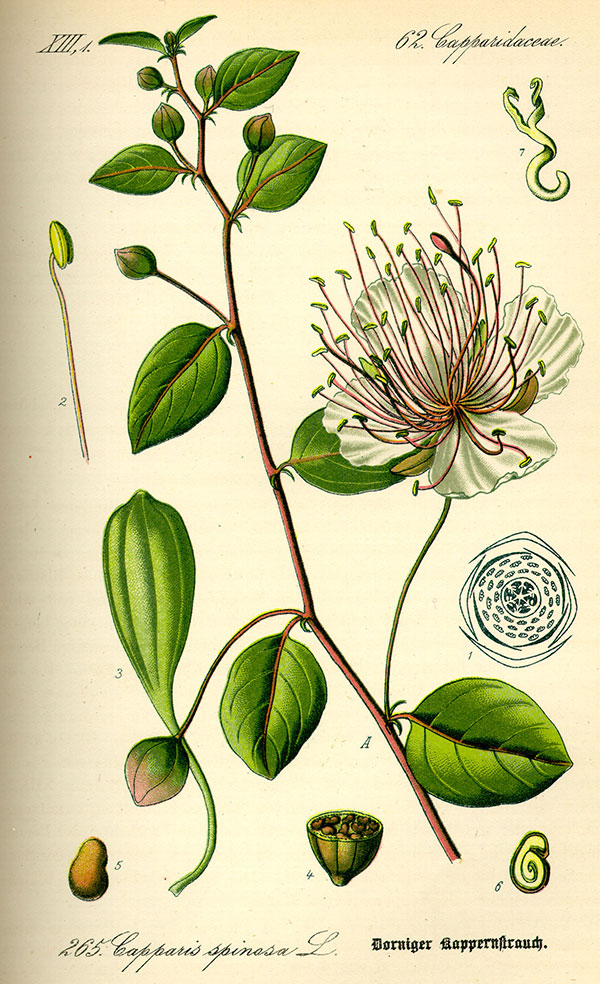