Coltsfoot is a medicinal shrub now commonly thought of as a weed that grows widely in waste areas, vacant lots, walkways, and untended gardens amongst other vegetative matter that may also be viewed as weeds. Prior to this stigmatism however, coltsfoot was once valued as a medicinal herb and was collected ardently by traditional herbalists.

Resembling the plant butterbur, which can sometimes be mistaken for coltsfoot, it is no more than a short shrub that is discernable chiefly for its distinctive leaf shape which resembles the hoof of a horse with minute and well-dispersed serrations or 'teeth' on the edge of the leaves. When young, these distinctive leaves also feature a slight covering of white 'down' or hairs that occur on both the upper and lower surfaces of the leaf, although the upper down dissipates as the leaf matures. It is also notable for its yellow bulb-like flowers that grow singly on a single stalk, and is replete with minute petals resembling filaments. Just like its 'partner herb' mullein, coltsfoot is used as both a fire-making implement and as an herbal medicine, with all the parts of the plant originally employed medicinally (although such is no longer the case at present). [1]

The most common use of coltsfoot is as an herbal remedy against cough. Much like its 'partner' herb mullein, one rarely encounters Western folkloric cough medicines that feature the one herb (coltsfoot) sans the other (mullein). In long-standing traditional belief, coltsfoot is the herb to employ whenever one is experiencing any type of bronchial problem, whether it be a simple cough, a dry racking cough, asthma, or even the (then) dreaded consumption (tuberculosis). This is due to the fact that coltsfoot contains a mucilaginous substance which acts primarily as an expectorant and demulcent. This action however is considerably mild for some individuals, especially those who are in the latter stages sickness, so remedies are often composed of a combination of herbs that serve the same expectorant and tonic function for better and faster results. The simplest method of preparing a cough remedy made from coltsfoot is to create a decoction of its leaves, preferably prepared very strong, which is then drunk straight up, or sweetened with stevia, honey, jaggery, or molasses. [2] This preparation may be done by employing either fresh or dried leaves, and, in some cases, even the stalks and flowers, although the latter possess only very little significant therapeutic merits when compared to the potency of the leaves itself, although older sources attest that the flower-stalks and petals themselves, when made into a very strong decoction, provides the same potency as the leaves, making it an integral ingredient in the creation of coltsfoot syrups and other variants of the remedy.

One should preferably use older leaves rather than the younger ones, as the profusion of hairs that grow in the upper and lower part of the leaves may cause mild irritation on the tongue and throat, although, if no other viable sources of older leaves are available, one may always resort to straining the resulting decoction over several layers of clean cheesecloth or muslin to prevent the tiny hairs from getting mixed with the decocted liquor.

This resulting liquor may even be employed to make therapeutic sweets such as 'Coltsfoot Rock', a patented confection originating from the United Kingdom that was created by Stockley's Sweets. [3] While the constituents of Coltsfoot Rock is a trade secret, one can always create their own coltsfoot infused sweets simply by creating a very potent decoction of coltsfoot to which is added brown sugar and honey that is then heated until the point of caramelization. This is then shaped (carefully), allowed to cool and set, and then wrapped and stored. This ready-to-eat coltsfoot candy can be taken at the first hint of a sore throat or cough to help prevent it from worsening.

When general applications are impossible or simpler and faster results are preferred the leaves and flowers of coltsfoot may even be dried and rubbed to create a base for an expectorant smoking mixture. It may be used by itself or in conjunction with other smokable therapeutic herbs such as mullein, and red willow bark. Compared to other methods of intake, smoking coltsfoot provides the fastest form of relief as the therapeutic substance is immediately admitted into the troubled area without delay, and while smoking coltsfoot or any of the combination of herbs stated above do not result in any mind-altering experience, moderation must nevertheless be taken when employing the herb for such purposes. [4]

Furthermore, coltsfoot may be used whole (leaves, flowers, roots and all) either in its fresh, but preferably in its dried form as a tincture that is left to macerate in a solution of pure grain alcohol or 90% proof brandy or vodka. Administered through very minute dosages diluted in water, it also delivers faster results than mere decocted tisanes.

In magickal practice, coltsfoot is an herb typically ascribed as a smoking herb and associated with the Native American shamanic practice where it is considered a harbinger of peace and equity amongst different peoples when shared, usually mixed with wild tobacco or red willow bark, although it is also used alone. In Western magick however, it is commonly employed as an incense more than a smokable herb, believed to bring about prophetic dreams. It is also believed to ward away negativity when burnt as incense, while the fumes issuing from its fumigation was believed to dispel illness. This incense is also said to allow the fumigator to commune with spirits. The dried and powdered leaves and roots are sometimes even employed in medicine pouches, mojo bags or gris-gris as an herb that broadens a shaman or wearer's psychic awareness while warding away hexes and dispelling all forms of evil or malignant intentions levied against the wearer, while attracting love and luck at the same time. [5]

Other names for Coltsfoot, Past or Present 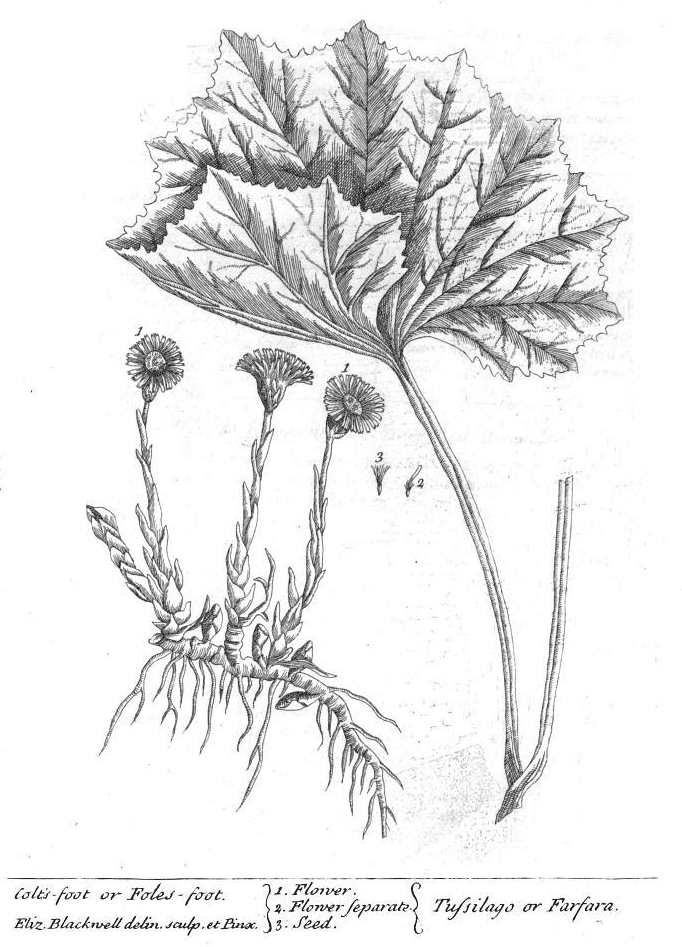