Ginseng is a highly popular herbal remedy that has ancient origins. Now sold practically everywhere in various forms, ginseng's medicinal properties and benefits were first recorded in Mainland China, where it was used by early herbalists as a general tonic. Known for its energizing and rejuvenating properties, it soon became a prized therapeutic herb, and was second only to tea in popularity.

Contrary to a common belief, not all ginsengs come from China, as equally potent and curative strains have been found in other Asiatic countries such as Japan and Korea, while far-flung strains have been found in the Americas and even in the seeming wastes of Siberia. Due to its various places of origin, traditional Chinese medicine typically ascribes different curative properties to different types of ginseng. Clinically speaking, while all true ginsengs (under the Panax genus) possess relatively the same curative properties, traditional medicine usually ascribes a yin or cooling property to American and Siberian ginsengs, while Asiatic ginsengs are more yang or warming in nature. Regardless of these subtle differences, all types of ginseng have proven to be quite popular in the alternative medicine market as a prime food supplement, medicinal herb, and overall tonic and are available in various preparations and forms.

It is however advised not to confuse Panax ginseng with American ginseng, Siberian ginseng (Eleutherococcus senticosus), or Panax pseudoginseng (notoginseng).

Additionally, there are typically four types of ginseng, depending on how the root is processed. These 'types' do not equate to its place of origin, but rather to its colour or state, of which there are as follows: Wild ginseng, white ginseng, red ginseng and sun ginseng. White, red, and sun ginseng undergo various types of processing (i. e. drying, heating, steaming) to increase whatever inherent medicinal properties they possess, while wild ginseng may either be used fresh (un-dried and unprocessed), or made into any of the three other variants. [1] There are also fresh ginsengs that are strictly of the cultivated variety, and thus are not classified as 'wild'. 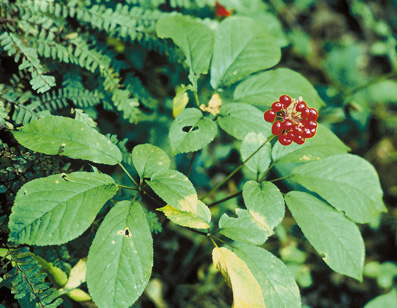 It is the roots of the ginseng plant that are employed for medicinal purposes, and these are the only part of the plant that has been (traditionally) ascribed any medicinal properties. The most common use of ginseng root in Traditional Chinese Medicine is as a general tonic, typically prepared into tea by itself or in combination with other energizing and tonifying herbs. In the west, ginseng is more popular in powdered form (in capsules).

Ginseng is considered to be an adaptogenic herb. Among its many uses, ginseng seems to be employed most commonly as an energy booster or aphrodisiac, traditionally by macerating whole ginseng roots in rice wine or some other alcoholic beverage (effectively creating tincture), which is often drunk sans any dilution, as prescribed by traditional Chinese herbalists.

With the introduction of American ginseng as well as its other varieties, the use of ginseng has gone beyond that of a mere tonic and aphrodisiac, as powdered roots have been made into capsules or tablets, and sundry extracts have been created and employed for the treatment of a wide array of problems ranging from lack of energy, stress, and fatigue. Ginseng, when combined with other nourishing herbs, has been shown to possess potent immuno-boosting and anti-viral capacities, literally helping the body fend off typical diseases like colds and flu, while protecting it from the ravages of other, far more dangerous illnesses. [2] Ginseng has even been used in combination with herbs such as gingko biloba to help improve cognitive function and enhance metal performance. Standardized extracts of ginseng are readily available in alternative pharmacies that are expressly sold as an aphrodisiac, a stress-buster, or a brain-food. [3]

Traditional oriental apothecaries typically sell whole ginseng roots in various states of processing, although the most common types sold are red, sun, and fresh ginsengs. Today, the use of ginseng as a medicine has expanded to become a global industry, with Japan, China, Korea, Siberia, and the Americas all contributing their share of ginsengs. The very practice of imbibing or employing ginseng as medicine, like the practice of partaking of tea, becomes (over time) something of a connoisseurship.

Ginseng (Panax ginseng) boasts a centuries-old prestige in being among the most well-known herbal remedies utilized in eastern Asia, especially China and Korea. Ginseng has been the subject of a fair amount of scientific study, as far as herbs go - and some interesting papers have appeared of late that support the traditional use of the herb as an all-round tonic and "anti-aging" herb:

A 2012 study found that a combination of Ginseng an Astralagus inhibited human gastric cancer cells and induced apoptosis (cell death) in lab tests. [4]

Pre-clinical studies have indicated the potential for Panax Ginseng to act as an anxiolytic (anti-anxiety) herb. [5]

Several studies have indicated antioxidant activity for ginseng. [6] Oxidation is a kind of age-related damage to bodily organs.

In a 2012 scientific review, American Ginseng was reported to have been shown to be effective in improving glycemic control in type 2 diabetes - and to be the most studied herb in this regard. [8]

In a 2013 study, Panax Ginseng was found to protect against induced bone loss (simulated osteoporosis) in lab tests. [9]

To date, ginseng has been deemed by modern studies to be of therapeutic value and efficacy against a wide range of diseases, such as cancer, cardiovascular disorders, and sexual dysfunction ailments. Moreover, ginseng appears to affect also vitality, immune function, and cognitive and physical performance [10] and maintains optimal oxidative status against certain chronic disease states and aging. [11]

Quite a few randomized controlled trials offer suggestive evidence for the efficacy of red ginseng in the treatment of erectile dysfunction, [12] "the inability of the male to achieve an erect penis as part of the overall multifaceted process of male sexual function" and a condition that affects millions of men but can be successfully managed by an appropriate selected therapy. [13] Choi, Seong, and Rha (1995) designed a study to explore the effectiveness of ginseng in treating erectile dysfunction, closely following the symptom changes of 90 patients, who were divided into groups. Results from this study had demonstrated that the group on ginseng treatment had significantly better changes in early detumescence and erectile parameters, namely, penile rigidity and girth, libido, and satisfaction (p < 0.05). Korean red ginseng administration demonstrated far superior effects over placebo or trazodone, and the overall therapeutic efficacy of ginseng on erectile dysfunction was 60%. [14] A doubleblind, placebo-controlled, crossover study - more or less - obtained similar results as regards the efficacy of Korean red ginseng on erectile dysfunction. Using the International Index of Erectile Function, RigiScan (an instrument that continuously measures penile tumescence and rigidity), hormonal levels, and penile duplex ultrasonography with audiovisual sexual stimulation, Hong, Ji, Hong, Nam, and Ahn (2002) enrolled 45 patients with erectile dysfunction in the study and had asked the ginseng group to consume 900 mg of Korean red ginseng thrice a day. Those who consumed Korean red ginseng had significantly higher mean International Index of Erectile Function scores (p < 0.01), better scores on questions about "penetration" and "maintenance" (p < 0.01), and more improved penile tip rigidity based on RigiScan than placebo. [15]

Ginseng extract stimulates and boosts as well the cellular immune function of peripheral blood mononuclear cells (PBMC) in both normal healthy individuals and patients with depressed cellular immunity, such as those with chronic fatigue syndrome or acquired immunodeficiency syndrome (AIDS). At a concentration of 10 µg/kg, ginseng had been determined to improve the function of natural killer cells and to potentiate the antibody-dependent cellular cytotoxicity of PBMC. [16]

Panax ginseng C.A. Meyer root extract encourages the production of collagen in human dermal fibroblast cells, possibly by stimulating the phosphorylation of Smad2, which is a central transcription factor in the production of type I procollagen. Due to this evidence, Panax ginseng C.A. Meyer root extract has reserved itself a good position in being a wrinkle-reducing agent for topical application. [17]

Note that these studies should not be seen as 'conclusive proof' that the herb will cure the above-mentioned conditions. Many of these are early lab trials that indicate very promising potential, however much scientific work (including human trials) needs to be done before the herb is considered 'scientifically proven' and the model of its action fully understood.

A number of tetracyclic triterpenoid saponins (ginsenosides) are active and abundant in ginseng. [18] Ginsenosides are ginseng compounds that have been evaluated by many studies for its antiproliferative, growth-inhibitory activities. In particular, ginsenoside Rg3 deters the progression and growth of human prostate carcinoma LNCaP cell line by stimulating the expression of cyclin-kinase inhibitors p21 and p27 and arresting LNCaP cells at G1 phase. Cell growth seems to be inhibited by ginsenoside Rg3 by means of a caspase-3-mediated apoptosis process. [19]

The use of ginseng has even gone beyond the realm of the medicinal, and has crossed over to the realm of the arcane. In magickal practice, ginseng is considered an aphrodisiac, or otherwise integrated into love salves or potions to help increase ardour and desire. Powdered or dried incense root has even been used in shamanic / magickal practice as incense to ward off evil entities, or to help in the breaking of hexes and curses. [10]

As with other herbs, caution and professional consultation is advised before taking herbs if you are using prescribed medications, as there is the possibility for adverse interactions.

Names of Ginseng, Past and Present