The guava is a not-so-well-known fruit bearing tree or small shrub that grows in diverse places all throughout the world, but that are considered native to Mexico, South and Central America, South and Southeast Asia, Africa, Australia, and the Caribbean, to mention a few. Belonging to the same family as the myrtle, it is characterized by broad, dark green leaves and white to yellow-white flowers with very visible stamens. The guava is also well known for the durable, heavy wood that it possesses, and the characteristic shedding of its bark. The guava is perhaps more well known (for those places that have a proliferate number of it) for it's characteristically sweet yet tart (when ripe) to slightly bitter (when unripe) fruit with a slightly lemony aroma and a myriad of tiny seed clusters at its centre. Its ovoid fruit is at first green in hue, but later becomes yellowish, slightly purple-reddish, or darker green in hue when ripe. 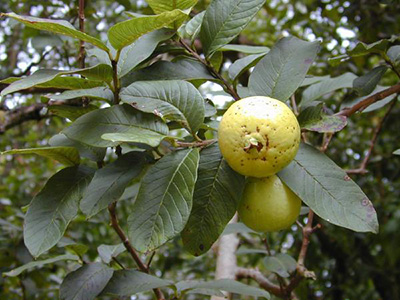 To the places where the guava is considered endemic, it is mostly prized for its uncanny oval fruit which is usually eaten as a snack or an aperitif. Known for being able to be eaten ripe or unripe, with each state yielding its own type of flavour, the guava is usually eaten while still immature. The still bitter fruit, with the texture resembling that of sandpaper is dipped in a mixture of soy sauce and vinegar with a pinch of either black pepper, sugar, coarse rock salt, or chili powder depending on the place where it is consumed (as the custom is common in many places, among the few being Hawaii, the Philippines, Pakistan, Mexico and India). [1]

The fruit, when ripe, is also eaten straightaway again with a dip, or without it. The juice of the ripe fruit is also very popular as a beverage, especially during summertime. Countries like Taiwan, China and Korea often sell guava juice in the summertime as a cooling drink, while Mexico uses the guava fruit in the creation of its many alcoholic beverages. [2]

In the Philippines, the guava's fruit is also used as an ingredient in some soup-based dishes, although it is primarily eaten in its unripe form as an appetizer, or otherwise made into a jam or preserve when ripe. The fruit of the guava tree is replete with many vitamins and minerals that are beneficial for the human body, but the guava is not only known as a fruit-tree, but is also prized by few cultures for its medicinal uses. The fruit itself, when consumed in its unripe form, is an excellent remedy for halitosis, while a mild decoction of the young leaves of the tree can be used as a type of antiseptic. [3]

In the Philippines as well as in many parts of the world where guava trees have had a long history, its leaves have been used both as an incense to drive away pests (and, in folkloric belief, evil spirits) as well as a decoction to disinfect wounds and relieve muscular swelling. In traditional Filipino folkloric medicine, chewed leaves of the guava tree would be placed on open wounds (this, more commonly done to hasten healing after circumcision) to facilitate healing - a practice which continues to this day, although a much more sanitary alternative would be a strong decoction of the leaves poured unto the affected area once it has sufficiently cooled.

The bark and leaves of the plant has undergone a number of studies in ascertaining its anti-bacterial, anti-fungal, and antiseptic properties, [4] as several cultures outside of the Philippines also employ the shed bark and the young or old leaves of the guava to disinfect wounds and medicinally treat bandages.

Fresh or dried young leaves may also be made into a tea to help treat diarrhea, dysentery, an fever as is done in Trinidad and Africa, while Philippine traditional medicine prescribes tea to alleviate muscular pain brought about by hard labour, as well as to ease the naggings of arthritic or rheumatic joints. [5] The bark is also believed to provide relief from lice and ticks in Philippine folkloric medicine, where an intense decoction of the leaves, bark, and parts of the branches itself are used as a potent hair-rinse to kill lice and ticks as well as banish dandruff.

Guava wood is also excellent for treating (i. e. smoking) meats, as it imparts a unique flavour into the meat not found in other woods. Guava wood can also be used as firewood, or as raw material for arts and crafts. A decoction of little branches is also used as an emetic and purgative, although misuse of the remedy can be fatal.

Studies have been conducted with regards to the efficiency of guava leaves and bark as both a pain-reliever and an antiseptic. [6] Extracts from guava leaves and barks have also been shown to possess anti-carcinogenic properties, while various infusions and decoctions from the plant have been shown to be beneficial in treating a wide variety of ailments beyond its traditional prescriptions. [7]

The consumption of guava (Psidium), in a randomized, single-blind, controlled trial, had been associated with a significant reduction in blood pressure and blood lipids. In this trial, the group made up of 72 patients consuming daily soluble fiber and a potassium-rich diet with 0.5-1.0 kg of guava manifested a 7.5/8.5 mmHg net decrease in mean systolic and diastolic pressures, as compared with the group assigned with their usual diet. [8]

In another study wherein the effects of guava intake against diabetes in betel quid-chewing Central Province, Papua New Guinea, residents were explored, the extract from the guava bud exhibited insulinmimetic and insulin-potentiating activity, the regular consumption of which leads to better protection from diabetes development as claimed. [9] Deguchi and Miyazaki (2010) reported that guava leaf extract is a traditional diabetes remedy in East Asia and other countries, the antihyperglycemic activity of which having been evaluated in some animal models. They have considered guava leaf tea a valuable dietetic method of treatment against type 2 diabetes mellitus. [10] Shen, Cheng, and Wu (2008) investigated the effect of aqueous and ethanol soluble solid extracts derived from guava leaves on hypoglycemia and glucose metabolism in type 2 diabetic rats and found a substantial decrease as regards blood sugar level and an increase in the plasma insulin level and glucose utilization among diabetic rats fed with either aqueous or ethanol extract of guava leaves (p < 0.05). Those fed with aqueous guava leaf extract displayed increased activities of hepatic hexokinase, phosphofructokinase, and glucose-6-phosphate dehydrogenase (p < 0.05), whereas those fed with ethanol guava leaf extract exhibited increased activities of hepatic hexokinase and glucose-6-phosphate dehydrogenase (p < 0.05) only. [11] Moreover, owing to its antioxidative, anti-inflammatory, and antiglycative effects, guava - in aqueous and ethanol extracts - provides laudable kidney protection against diabetic progression by (1) significantly lowering glucose and blood urea nitrogen levels; (2) increasing plasma insulin level; (3) reserving glutathione content in a dose-dependent manner; (4) retaining catalase and glutathione peroxidase activities; (5) decreasing reactive oxygen species, interleukin-6, tumor necrosis factor-a, and interleukin -1ﬂ levels in the kidney; (6) decreasing the levels of renal N (e)-(carboxymethyl)lysine, pentosidine, and fructose; and (7) suppressing aldose reductase activity in the kidney. [12]

Guava is also used in the management of diarrhea, partly due to its inhibitory action on the increased watery secretions - something that is distinct to all acute diarrheal diseases and cholera. In one study, a dose of 0.2 mL/kg of guava leaf extract suppressed by 65% the small intestine propulsion (i.e., diarrhea) induced among male Sprague-Dawley rats through Microlax gavage. [13] Aglycone quercetin, which is present in the leaves and extracts of guava, produces also a spasmolytic action. [14]

Recently, Sriwilaijaroen et al. (2012) declared that the tea prepared from guava could be of promising use for the control of epidemic and pandemic influenza viruses, including oseltamivir-resistant strains. Their study results have revealed that guava tea significantly suppresses the growth of the following viruses:

Im et al. (2012) identified d-glucuronic acid, quercetin 3-glucuronide, loganin, and xanthyletin from the butanol fraction of guava leaf extract and concluded that guava leaves could reduce lung cancer cell metastasis, the said fraction suppressing the expression and activity of matrix metalloproteinase-9 and metalloproteinase-2 by downregulating ERK1/2 activation in lung cancer cells. [16] On the other hand, Coutiño-Rodríguez, Hernández-Cruz, & Giles-Ríos (2001) identified a galactose-specific lectin in guava that prevents the adhesion of Escherichia coli O157:H7 to red cells. [17]

Guava leaves are employed by local Filipino shamans to ward off evil spirits and to call on 'little folk' that they refer to as 'anitos'. A decoction of the leaves and bark is also used for purification purposes, usually as a hair and body rinse prior to undertaking ritualistic tasks. The wood of the guava tree is also employed in many ways - either as firewood for ceremonies or rituals, as handles for tools, as weapons, or as staffs or wands used by shamans, some of which are said to possess the ability to move of their own accord and beat anyone without shamanic blood foolhardy enough to attempt to touch it. Philippine folkloric belief states that the wood of the guava tree is repulsive to true demons and half-breed demons alike, making a staff, walking-stick, or better yet a guava tree near one's household a perfect protector against things that go bump in the night...

Names of Guava, Past and Present